The Canadian Armed Forces has quietly revealed that 20 service members took their own lives last year, the largest number of military suicides since 2014.

The increase came despite the federal government having introduced a suicide-prevention strategy for military members and veterans in 2017, underscoring the complexity of the challenge facing the military and government in preventing such tragedies.

Not only was that an increase of five military suicides over the previous year, it was the largest number of suicides among those in uniform since 23 service members took their own lives in 2014. The figures did not break the numbers down by gender.

Military officials did not issue an accompanying report to explain the increase or what additional steps may be needed to address the situation, but Defence Department spokesman Daniel Le Bouthillier said in an e-mail Wednesday that an analysis will come later in the year.

Such reports have been published each year since a rash of military suicides first cast a spotlight on the issue in 2013, leading the government and military commanders to promise to address the problem.

The subsequent Defence Department and Veterans Affairs Canada suicide-prevention strategy promised to improve the services and support available to military members and veterans in the hope of increasing awareness and reducing the number of suicides in both populations.

That included adding more medical staff, training personnel on how to respond if someone showed warning signs for suicide and introducing new measures to ease the transition to civilian life for those leaving the Forces.

National Defence’s suicide-prevention strategy was endorsed by a variety of groups, including the Canadian Psychological Association, the Canadian Mental Health Association and the Mood Disorders Society of Canada.

“The CAF has provided leadership in the area of mental health and remains committed to working with its partners to ensure that our personnel, with their families, who are called to sacrifice so much in service to their country, receive quality care and support,” Le Bouthillier said.

“Suicide is a tragedy and an important public health concern that affects everyone – both in and out of uniform – which is why we will continue to assess capabilities and adjust resources to ensure we meet the increasing complexities and demands associated with caring for our own.”

Defence Minister Harjit Sajjan acknowledged last year that “we must always strive to do better,” adding: “Every time we lose a member of our Canadian Armed Forces to suicide, it is felt by us all. One suicide is too many.

“While there is no simple solution or easy answer, we will continue to evolve and improve the strategy as we expand our understanding of suicide and mental health and move forward on implementing solutions.”

The Canadian Armed Forces for years resisted suggestions service members were more at risk of suicide than the general public, but reversed course after a landmark study from Veterans Affairs Canada in 2017 suggested that was true.

Now, with the vast majority of service members now ordered to stay home so they are ready to respond if the military is called to help out with COVID-19, commanders have been encouraging their troops to reach out and stay connected to ensure their mental health.

“These are unique and stressful times,” chief of defence staff Gen. Jonathan Vance told all Forces members in a letter on March 27. “Take care of yourselves and your families both physically and mentally, say in contact with your colleagues and reach out to support one another.”

Opinion
The Canadian military’s approach to the Forces’ psychological problems is all backward
January 10, 2020 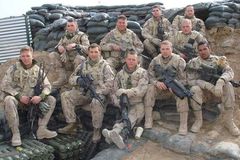 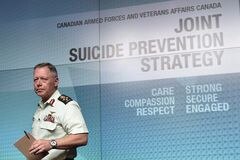