The arrival of Syrian refugees, as well as thousands of asylum seekers over the United States border, along with the global growth in anti-immigrant sentiment have barely moved the positive attitude most Canadians have toward new arrivals, a study has found.

Six-in-10 Canadians chose “disagree” when asked the question “Are immigration levels too high?” in the February survey by the Environics Institute for Survey Research – a finding that has remained relatively stable for a decade. Eight-in-10 said immigrants have a positive economic impact. Compared with last year’s survey, more respondents believed that immigrants adopt Canadian values. Most of the national results extended a steady 30-year trend toward greater acceptance of immigrants.

“I think some people felt retrenchment was happening, or at least feared it was happening, but since last year the change is pretty small and is still more positive than negative,” said Keith Neuman, executive director of the Environics Institute that conducted the survey of 2,000 Canadians.

While immigration is not a matter of consensus support in Canada, where 35 per cent believe the country takes in too many immigrants, that figure, too, has declined over 10 years. The poll’s overall findings offer a snapshot of a Canadian society in which anti-bigotry and pro-immigration social norms are holding in the face of pressure from extremists and global trends, Dr. Neuman said.

Canadians also inched away from the polarization over immigration issues seen in Europe and in the United States under Donald Trump. Canadians were less likely to strongly agree or disagree with several poll questions and more likely to express uncertainty and doubt, according to Dr. Neuman. “It’s not a big change, but it’s enough to say opinions are a little less polarized than last year,” he said. “It’s dangerous to assume what’s happening in the United States or elsewhere is also happening here. ”

“It’s Alberta rather than Quebec that has the hardest attitudes toward immigrants and refugees, which is not what we tend to assume,” Dr. Neuman said. “But it’s too early to say it’s a trend.”

The irregular crossings received enormous attention in Quebec, including a lot of commentary expressing doubts about the legitimacy of the asylum claims. The province also saw the rise in profile of small, far-right fringe groups hostile to immigration, but the phenomenon seems to have limited reach.

The poll showed 42 per cent of Quebeckers agreed with the statement “Many people claiming to be refugees are not real refugees.” That number is up three percentage points from last year. Forty-three per cent disagreed, down six points. Nationally, 38 per cent agreed, while 48 per cent disagreed.

In Alberta, 48 per cent said they agree that many refugee claimants are not real refugees, an increase of three percentage points, while 35 per cent disagreed, a drop of nine points. Sixty-two per cent of Albertans said too many immigrants don’t adopt Canadian values compared with the national score of 51 per cent.

Even before the results were shared with him, Fariborz Birjandian, chief executive of the Calgary Catholic Immigration Society, anticipated the Alberta difference.

Once he heard the numbers, Mr. Birjandian said the higher level of negative attitudes captured in the poll disguise an Alberta paradox: Some Albertans donate and volunteer to help settle refugees more than most Canadians while others express suspicion or hostility toward them.

Alberta’s economy has also been in bad shape with the collapse of oil prices. Economic uncertainty often increases negative feelings about immigration, said Sarah Aimes, director of the immigrant-services department at Lethbridge Family Services. But, she said, positive sentiment about the Syrian refugees has tempered the negatives.

The Environics Institute poll of 2,000 Canadians, conducted by telephone between Feb. 5 and Feb. 17, has asked the same questions for three decades. It has a margin of error of 2.2 percentage points, in 19 out of 20 samples.

On a global scale, Canada still stands out for the public’s positive attitudes toward new comers and in the happiness that immigrants themselves report. When asked about their well-being, Canadian immigrants were ranked seventh-happiest out of 140 countries. 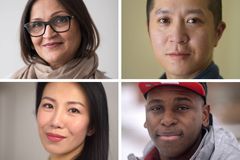