Canadian doctors say they have diagnosed a new type of severe vaping-related lung disease in an Ontario teen that is distinct from the outbreak that has been linked to dozens of deaths and thousands of illnesses in the United States.

While the exact cause of the boy’s illness isn’t clear, doctors are focusing on flavour ingredients in the e-cigarettes he used. That’s because his illness, called bronchiolitis obliterans, is remarkably similar to the serious, chronic lung disease experienced by some workers who were exposed to the chemical flavouring agent diacetyl in microwave popcorn factories.

Dr. Bosma and her co-authors are calling for stricter regulations on the e-cigarette industry to protect others.

“The bottom line is that vaping can harm the lungs in different ways,” Dr. Bosma said in an interview. “We need to be aware that anyone that is vaping is at risk of possible lung injury.”

The case unfolded earlier this year, when the teen went to a local hospital’s emergency department because of a severe cough. He was diagnosed with pneumonia and sent home with a prescription. But he returned to the hospital five days later after his condition continued to deteriorate.

Soon after, the boy was intubated and put on a mechanical ventilator, a form of life support. His condition worsened, so doctors placed him on a heart-lung bypass machine to keep him alive. They thought he might need a lung transplant to survive, but treatment with high doses of corticosteroids started to work and he was able to recover slowly.

Before he got sick, the Ontario teen vaped daily for five months, using flavours including “dew mountain,” “green apple” and “cotton candy” that he purchased online from an unidentified Canadian retailer.

He “regularly” added tetrahydrocannabinol, or THC, to his vaping fluid and occasionally inhaled marijuana from a bong, the case study says.

Doctors reported the case to Health Canada’s consumer product incident reporting system on Aug. 20 and they said it remains under investigation.

Diacetyl is a common flavouring agent that is found in more than half of e-cigarette products, even in those that claim to be diacetyl-free, the authors wrote.

Dr. Bosma said that diacetyl can also form in e-cigarette liquids over time and that nicotine can help speed the formation of diacetyl in vaping liquids.

While another chemical agent in the boy’s e-cigarettes could be responsible for his illness, experts say the public needs to understand that the health consequences of inhaling vaping solutions simply is not known.

“It’s possible that there are multiple different conditions associated with inhaling these noxious chemicals,” said Irvin Mayers, a respirologist and professor of medicine at the University of Alberta in Edmonton.

Vaping-related illnesses have been in the spotlight in recent months after a growing outbreak, primarily in the U.S.

Patients involved in that outbreak have what looks like inflammatory pneumonia. The air sacs in their lungs fill with fluid and, if not corrected, they could die, said Matthew Stanbrook, a respirologist at Toronto Western Hospital who wrote an editorial in the CMAJ Thursday calling for tough new restrictions on e-cigarettes. The illnesses are acute in nature, whereas the illness in the London teen is a long-term chronic illness.

Dr. Bosma said she supports recommendations from the Heart and Stroke Foundation, including a ban on flavours that appeal to youth and raising the minimum age of purchase to 21.

Prince Edward Island is on the verge of doing just that. A private member’s bill proposes passing strict measures to regulate the use of vaping products, including adopting the highest age restriction in the country, which is 21. It will also ban certain flavours of e-cigarettes and restrict where the products can be sold.

“I think the vaping industry is marketing e-cigarettes to youth,” Dr. Bosma said. “I think there needs to be tighter regulation.”

The London boy was discharged after 47 days in the hospital. But he hasn’t been able to return to school or resume other normal activities, Dr. Bosma said.

She said she and her colleagues wrote about the case to warn the public about the dangers of vaping. The boy and his family are still recovering from the ordeal and did not want to speak publicly, but are hoping his story can help others, she said. 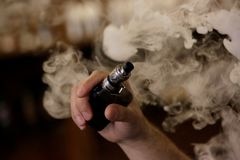