One of the keys to Jenna Pickering’s return to work at the Suncor Energy Inc. head office in downtown Calgary was making sure her son Luke had a place at the affiliated daycare in the same office tower — even before he was born.

“I think I was about six months along and I put ‘Baby Pickering’ on the wait list,” the 33-year-old recalled with a laugh.

When her husband Shea, 34, got a job at the Suncor building two years ago and their 18-month-old daughter, Hannah, started going to daycare last year, the daily grind truly became a family affair.

Each day, they drop Luke, now 4, and Hannah off at the daycare on the third floor before mom and dad head up to their respective floors.

The Pickerings know they are among the lucky few in Canada to have childcare at the office.

Despite the rising number of women in the workforce and a federal government push to help even more join — an effort it says will add billions of dollars to the country’s economy — few Canadian employers offer childcare in the workplace.

In 2000, a federal government study found 338 work-related childcare centres operating in the country. The survey counted on- and off-site daycares supported by an employer, a group of employers, a union or an employee group, that sought to meet the needs of employees.

Employment and Social Development Canada said it could not find more recent figures, while advocacy group Childcare Resources, whose 1992 study identified fewer than 200 employer-related daycares, stopped collecting data on employer centres years ago because of their rarity.

Even when offered financial incentives by government, employer apathy persisted.

In last year’s otherwise childcare-friendly budget, the Liberals quietly axed a Harper government initiative that provided employers a 25 per cent tax credit to a maximum of $10,000 per space on costs incurred to build or expand licensed childcare facilities.

The goal of the program implemented in 2006 was to create 5,000 new workplace daycare spaces annually, but fewer than 100 individuals and 20 corporations were claiming the credit each year, according to Finance Canada.

Employers’ lack of interest in childcare in Canada is disappointing, said Tanya van Biesen, executive director for Catalyst Canada, whose mission is advancing women’s progress in the workplace.

Many parents have no choice but stay home to watch their children because they would be “breaking even or falling behind” financially if they had to pay full fare for daycare, she said.

“For many years, people didn’t really think about or care about the fact that women were exiting stage right because they didn’t have any other options,” she said.

Employers recognize childcare is a major factor in attracting and retaining female employees, but balancing the costs and matching needs with resources is difficult, said Peter Dugandzic, CEO of Chartered Professionals in Human Resources of Alberta.

“I think that’s the issue for most companies. One, there’s the cost, and secondly, the physical layout,” he said.

While some employers advertise daycare access to attract staff, most — if not all — refer to third-party services. Some subsidize certain costs or provide the space to daycare operators for free in return for preferred access.

For example, when Mediacorp named BASF Canada as one of its Top Family-Friendly Employers for 2018, it cited the chemical company’s programs including salary top-ups and extended leave for new mothers and fathers — and mentioned the private onsite daycare at its Mississauga, Ont., head office.

But the company has no formal relationship and doesn’t financially support the daycare on the ground floor, said Terri Howard, director of human resources.

Among the few employers that do provide childcare services, many of them are public institutions, such as universities and even Parliament Hill.

At Simon Fraser University’s Burnaby, B.C., campus, a daycare centre that has operated for at least 50 years is run by a non-profit operator with preference for its 315 spaces given to employees and students.

The university provides space on its grounds rent-free and subsidizes the salaries of two employees, at an annual cost of about $500,000, said Sandi de Domenico, associate vice-president of human resources.

The benefits in recruiting and retention of staff justifies the cost, she said. However, the university’s two other campuses in the area don’t offer childcare and de Domenico couldn’t say why.

Canada could add $150 billion to its economy by 2026 by employing more women in technology and taking steps like providing better access to childcare to boost women’s participation in the workforce, McKinsey Global Institute estimated last year.

In the science, technology, engineering and mathematics (STEM) fields — areas that Canada is focused on strengthening due their potential contributions to economic growth — women represent just 20 per cent of jobs in the field.

“When you think about evening workshops, beer and ping-pong night-time activities, long hours, those things are not conducive to the parent lifestyle.”

Munday estimates it costs $3,400 per month for good-quality daycare for her two kids, a bill she recognizes is unaffordable for her startup employer.

Her return to work after having her daughter four years ago, therefore, involved compromises. She negotiated a flexible schedule, including sometimes working from home, and unlimited sick days for her and her children. Her daughter attends preschool three days a week and Munday’s mother watches her son to save on daycare costs.

Daycare at work is a major perk of working at Suncor for the Pickerings. The company doesn’t subsidize their daycare costs, but the fees are competitive.

“I went into having children knowing I wanted to go back to work,” she said.

“It’s still a hard choice, but I like having them close by and this is the best of both worlds.”

Trudeau says child care benefit should not go to rich families like his
July 22, 2015 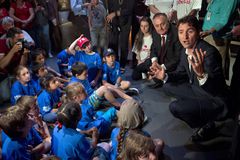