The Canadian military is reporting several victories in its four-year war on sexual misconduct in the ranks, but also some defeats along with signs of “fatigue” as some service members grow tired of the campaign.

The findings are contained in a new internal analysis released by the Forces on Tuesday, which sought to provide an update on the fight against inappropriate and criminal sexual behaviour in the military launched in 2015.

The analysis follows a report from the federal Auditor-General last fall that slammed senior commanders for not doing enough to support victims of such misconduct, which was undercutting efforts to eliminate it.

Despite the Auditor-General’s findings, the new report says the military has implemented several measures to help victims and prosecute perpetrators while raising awareness of sexually inappropriate behaviour across the Forces.

Yet, the military’s attempts to change its overall culture – and ensure what progress has been made isn’t reversed – have been hindered by a lack of information and “bureaucratic failure,” the report says.

That bureaucratic failure manifests itself in several ways, including the military’s attempt to concretely define what constitutes sexual harassment, sexual misconduct and other terms.

The Forces also waited too long to consult victims and advocates and have failed to learn the lessons of the past three years, the report added, while some in the ranks have started to tire of the constant focus on misconduct.

“The Operation Honour message has been circulating within the [Canadian Armed Forces] for more than three years, however in some quarters anecdotal evidence suggests that fatigue with the content is occurring,” the report says.

Operation Honour is the name given to the effort to eliminate sexual misconduct in the Forces, which Chief of Defence Staff General Jonathan Vance launched in July, 2015.

The commander of the military’s sexual-misconduct response team acknowledged the Forces’ failures in an interview on Tuesday, particularly when it came to genuine cultural change.

“If you think about the previous nearly four years now, we’ve been dealing with the immediate response to directly address behaviours that are causing harm to people within the Canadian Armed Forces,” Commodore Rebecca Patterson said.

“Cultural change is very challenging. I realize we keep saying that and we don’t have a road map.”

The Forces is now drawing up a “campaign plan” to translate the increased awareness of inappropriate sexual misconduct into a permanent change in attitudes and beliefs, Cmdre. Patterson said.

The effort includes having the military’s sexual-misconduct response centre, first established in September, 2015, as a call-centre for victims, become the Forces’ central authority for all inappropriate sexual behaviour.

That is what retired Supreme Court justice Marie Deschamps recommended following her explosive study in early 2015 that uncovered a highly “sexualized culture” in the Forces, prompting the military to take action.

“It just became increasingly clear that this particular model that we set up and the division of responsibilities was not serving members as best as it should,” said Denise Preston, executive director of the centre.

“So essentially, what’s happening now is there’s going to be a shift in coming months to establish the [centre] as envisioned by Madame Deschamps. … Our role will be more of a leadership role.”

In his report, former auditor-general Michael Ferguson found many victims were not properly supported when they do speak up because of gaps in the services available and a lack of training and policies on how to respond to and support them.

Marie-Claude Gagnon, a former naval reservist who founded a group for survivors of military sexual trauma called It’s Just 700, said Mr. Ferguson’s findings – and the fact some Forces members are growing tired of the campaign – underscore the need for change.

“I would like the training to focus a little bit less on the lower ranks [which] keeps telling them, ‘Don’t do this, don’t do that,’ because yes, it does create bitterness, anger and fatigue,” she said, adding more needs to be done at the leadership level.

“The people in the leadership roles who have the ability to make big changes, they need to be trained to open their eyes and make sure that when they write processes and procedures, they are inclusive and take into account victims’ needs.” 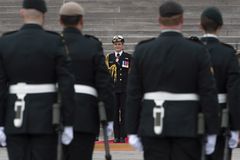