After joining friends for the Eid prayer on Sunday, Womic Baba returned home to monitor the news and social media for updates on Kashmir.

The civil engineer’s parents are from the region, and he hasn’t spoken to them for more than a week. He managed to reach someone there on Thursday, when a friend briefly gained internet access and sent some messages before losing the connection.

“It kind of feels like the apocalypse,” said Mr. Baba, 31, who lives in Toronto. “With the 21st century, you can’t call your parents back home.”

Since Aug. 4, the Indian-controlled part of Kashmir has been without regular internet access, mobile service or even landline connections. The communications blackout, combined with a heavy military presence in the region and a curfew, has left family members in Toronto increasingly concerned about their loved ones back home.

Kashmir has been an area of dispute since India’s partition, with portions of the region divided between Pakistan, India and China. Although communications blackouts have occurred in the past, this time, just a day in, the recently re-elected Indian government removed an article from India’s Constitution that gave Kashmir special status, including the ability to set its own laws.

A related article that prohibited outsiders from buying property in Kashmir and holding government jobs was also removed.

In the early hours of Sunday, Toronto businessman Farhat Buchh also heard briefly from his brother-in-law, who works for the government in Kashmir. His brother-in-law phoned to let Mr. Buchh and his wife know that his family is fine. But Mr. Buchh said he didn’t have any information about his extended family because of limited mobility in the streets.

On Saturday, members of the Kashmir community in Toronto had marched in the streets to raise awareness about the situation.

“It was really important for us to all be there together,” said Nanky Rai, who helped organize the demonstration, in an interview. Her parents were born in Kashmir, and Ms. Rai spent time there when she was a child and for part of her studies.

She added in an e-mail that among the goals of the demonstration were to demand an end to the communications blackout and the curfew and to support the right of Kashmir to determine its own future as a sovereign state.

Experts say the Indian government’s recent moves are designed to shut down political dissent in the region.

“These blackouts are not new, they’re not unique, but this is prolonged, it’s being done in a way that is meant to drive home the helplessness of a population that’s already under severe duress,” said Nitasha Kaul, a Kashmiri writer and an associate professor of politics and international relations at the Centre for the Study of Democracy at the University of Westminster in London.

She said removing the articles in the Indian Constitution without consulting the residents of Kashmir was “absolutely arbitrary."

“It’s about giving something to the followers which is packaged as development and nationalism but actually is heightened oppression,” she said.

"The events as they’ve unfolded since early August [are] indefensible by any standards.” 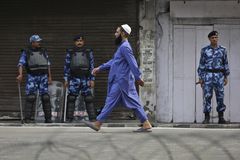 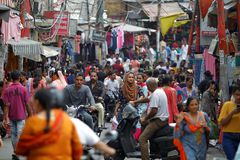 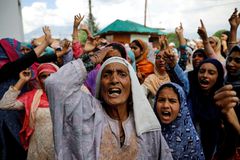