Because of physical distancing, Darryl Falzarano and his colleagues couldn’t celebrate with a group hug when they completed a successful test of their candidate vaccine for COVID-19.

Nor could they share their promising results with other colleagues at the University of Saskatchewan’s Vaccine and Infectious Disease Organizaton-International Vaccine Centre, since they are the only scientists allowed to come to work in the Saskatoon-based facility.

But it was exciting news nonetheless when their readouts showed that the ferrets in their study were able to fight off the disease after receiving two doses of the team’s in-house vaccine. The positive outcome sets the stage for tests with human subjects, which could begin as early as this fall.

“It’s what we were looking for, so that tells us to continue on the path that we’re on,” said Dr. Falzarano, who is the lead investigator on the project.

The Saskatoon team, which had previously been working toward a vaccine for MERS, a related disease caused by a different coronavirus, pivoted to working on COVID-19 as soon at the genetic sequence of the virus was published in February. Weeks later, their lab was the first in Canada to isolate the virus.

The team’s results, announced on Monday, are the latest hopeful sign that – so far – Canadian researchers and their global counterparts are making progress in their efforts to produce a vaccine that will be safe and effective against COVID-19.

Earlier this month, Quebec-based biotech company Medicago Inc. announced positive results of animal studies with its vaccine candidate. Last week, IMV Inc., another Quebec company, said it is in a similar position. Both companies have indicated that they hope to begin clinical trials this summer pending Health Canada approval.

Meanwhile, a clinical trial of the first and only COVID-19 vaccine that is already approved for human testing in Canada is set to begin next week and could grow to include as many as 600 participants by the end of August.

The vaccine was produced by CanSino Biologics, a Chinese company, using an approach that stems from an earlier collaboration with Canada’s National Research Council. It was first tested in a non-randomized clinical trial that involved 108 subjects in Wuhan. Last week, the effort yielded the first peer-reviewed study of any COVID-19 vaccine, published on Friday in the medical journal The Lancet. Researchers in China reported that their subjects experienced mostly mild to moderate reactions, and that the vaccine stimulated the production of antibodies that can neutralize the virus. More work will be needed to confirm the result. This will include the Canadian trial. But even larger trials will be needed to show if the vaccine is truly effective at preventing COVID-19. Even if all proceeds without a hitch, most experts do not expect a vaccine that is widely available for the public until next year.

Scientists caution that even at the breakneck speed with which the vaccine research is being conducted, it is still early days. Many candidate vaccines are likely to fail. Even those that succeed in animal studies and are shown to be safe for humans may produce lacklustre results once studies expand.

This why the global race to develop a vaccine is proceeding in multiple directions. As some candidates flame out, others will take over as front runners. And should more than one vaccine prove to be effective, it could turn out that different vaccines will work best for different subpopulations or age groups.

"There are a number of reasons to have multiple eggs in the basket,” said Scott Halperin, director of the Canadian Centre for Vaccinology in Halifax, which is organizing the trial of the CanSino vaccine. “The more candidates you have, the more likely you’re going to have a success.”

Several years ago, Dr. Halperin, who is also a professor at Dalhousie University, was involved in developing an adjuvant – a compound that primes the immune system and can improve a vaccine’s performance. The Saskatoon team is using the adjuvant in its vaccine.

After the candidate vaccine was developed in March, the team administered it to ferrets in two immunizations 28 days apart. After another 28 days, half the animals were exposed to the virus that causes COVID-19. The animals generated a strong immune response and produced antibodies that neutralized the virus.

“Based on our MERS data, we expected it to work in ferrets ... but you never know in science” Dr. Falzarano said. “We don’t have years of experience [with COVID-19], we have months.”

Medicago’s president and chief executive officer, Bruce Clark, said his company’s vaccine was tested in mice, which also generated antibodies. Further tests are needed to determine if those antibodies can neutralize the novel coronavirus. But Dr. Clark, who holds a PhD in biochemistry, said he was encouraged that the mice produced antibodies within 10 days after one shot of the vaccine. This suggests that if the vaccine is effective in humans, its immunizing effects will emerge quickly, he said.

“When you have as serious a disease as COVID, you don’t want something that’s going to take three months to generate the maximum response,” Dr. Clark added. 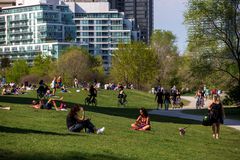 Alberta to screen international travellers arriving in Edmonton and Calgary for fever
May 21, 2020 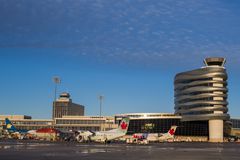 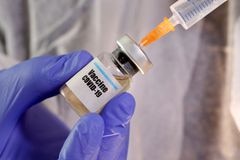