Large crowds filled the avenues in Toronto, Vancouver and Ottawa while smaller boisterous crowds gathered in at least 85 other communities from Victoria to St. John’s to Inuvik. The demonstrations capped off a week in which millions of children and young people took to the streets around the world and Ms. Thunberg drew the ire of Donald Trump with her angry speech to the United Nations, denouncing the inaction of world leaders such as the U.S. President.

In Montreal, Indigenous teenagers and Ms. Thunberg arrived about 20 minutes before the last stragglers left the starting point of the city’s walk. Marchers spilled into side streets along the planned route, taking over much of the downtown. The 4.4-kilometre continuous stream of humanity defied precise counting, but the city’s emergency services estimated 315,000 people were there.

“You should be proud of yourselves, we have done this together,” Ms. Thunberg told the massive crowd. “Millions of people are marching around the world. It’s incredible to be united in such a way.”

Ms. Thunberg took the stage to call on leaders to take action before global heating can no longer be restrained. “You are not in school today. You are not at work today because this is an emergency,” she told the crowd. “We will not be bystanders.”

Her message resonated among the climate strikers. “We need to find a more respectful way of living,” said Jessica Lacroix, a student who marched in Montreal but hails from the Cree community of Nemiscau near James Bay in Northern Quebec. “Up North we have some serious problems with the environment. With mining, the water is getting contaminated, the land is getting contaminated. We can’t go on this way.”

In Halifax, Julia Sampson was among 10,000 people who walked through the streets to protest the absence of strong climate change measures amid rising sea levels and grim flood forecasts for her city. “The climate crisis is threatening my future, and I want to live,” said the high-school student. In Vancouver, a preschooler carried a sign: “This cannot wait until I am bigger.”

The network of students and activists who organized the march issued demands: transition to renewable energy, legally enshrine the right to a healthy environment, adopt the UN declaration on Indigenous rights and protect the poor from climate change.

Montreal organizer Cedric Gray-Lehoux, an Indigenous youth representative, said politicians such as Justin Trudeau and Jagmeet Singh who showed up at climate marches will be expected to deliver plans to meet greenhouse gas emission targets. “We will be here waiting to see if you deliver, whether you like it or not,” he said.

Canadian kids should be able to sue over climate inaction

The Liberal Leader joined the Montreal march for a short time as he campaigned for re-election Oct. 21. The reception was hostile as protesters marched near him yelling “No pipeline” and heckled him for his history of wearing brownface and blackface before he entered politics. Mr. Trudeau’s security detail wrestled to the ground one man who approached the Prime Minister in one of the only incidents on a peaceful day. Mr. Trudeau put his arm around his son, Xavier, who was visibly upset by the encounter.

Earlier, Mr. Trudeau met Ms. Thunberg for 15 minutes before she convened with Montreal environmental movement leaders. Ms. Thunberg scolded Mr. Trudeau on social media in June for approving the Trans Mountain pipeline expansion, but she was more conciliatory in the meeting, saying climate change is the responsibility of more than one leader. But during her speech, she made it clear she views Canada as a laggard. She noted both Canada and her homeland of Sweden have an image as climate leaders. “In both cases, it means nothing,” she said. “In both cases, it’s just empty words.”

Mr. Singh, the NDP Leader, attended a climate protest in Victoria while Conservative Leader Andrew Scheer opted to stay away from the climate strike, making an infrastructure announcement in Coquitlam, B.C., instead.

While politicians faced some ire, the atmosphere in the marches from coast to coast was festive and orderly. Montreal has a litter problem at the cleanest of times, but the protesters made their route spotless, picking up trash.

Many parents brought very young children who wore face paint and carried signs. “I tell them the importance of getting involved, of taking care of our planet, our community,” said Stéphanie Hétu, who was flanked by her children, Alice, 5, and Loïc, 8. 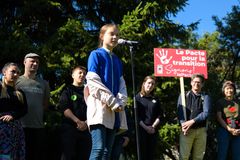 Too little coverage of climate change, too much coverage of blackface, or just the right amount?
September 27, 2019 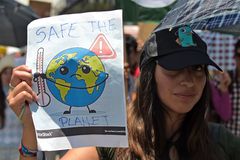 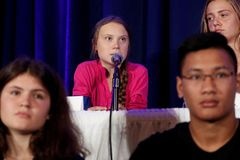 Facing the risk: Climate impacts that young Canadians will have to contend with
October 1, 2019 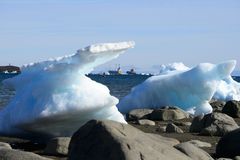