Tyler Toffoli got a brief taste of what it’s like to play in a Canadian NHL market.

After spending his entire career with the Los Angeles Kings, the winger was acquired by the Vancouver Canucks prior to February’s trade deadline. That increased attention up the West Coast was a welcome change after eight seasons of relative anonymity in Southern California.

Toffoli also knows the level of scrutiny waiting for him just over the horizon will be even greater.

The Montreal Canadiens signed the former 30-goal scorer to a four-year US$17-million contract in free agency on Monday, adding offensive punch to a lineup that ranked in the middle of the pack in 2019-20.

“It’s a different animal,” Toffoli said of suiting up for the Canadiens on a video conference call with reporters Tuesday. “You want to thrive in these moments, and I’m really excited for the opportunity.

“I want to be a guy that we can go to and score a big goal or make a big play at the right moment.”

Toffoli joins Montreal after a short stint in Vancouver that saw him leave Los Angeles as part of a deal for forward prospect Tyler Madden and a second-round pick in the 2020 NHL draft.

The 28-year-old had 10 points (six goals, four assists) in 10 regular-season games with the Canucks prior to the league shutting down because of the COVID-19 pandemic in March. Toffoli looked primed for similar production playing on a line with star centre Elias Pettersson once the NHL resumed the schedule this summer, but a high-ankle sprain suffered in the opener limited him to just seven outings through three postseason rounds before Vancouver was eliminated by the Vegas Golden Knights.

In the end, Toffoli’s time with the Canucks – a team spending a healthy chunk of its budget on an aging bottom-six forward group – lasted just 17 games.

The flat salary cap of US$81.5-million created by the pandemic’s economic fallout coupled with Vancouver needing to sign Pettersson and another franchise cornerstone in play-driving defenceman Quinn Hughes to new deals after the 2020-21 campaign meant Toffoli saw the writing on the wall as he headed toward unrestricted free agency.

“I talked to [the Canucks] a little bit, but I think everybody knows what their situation is and was,” said the Toronto native, whose contract carries an annual average value of US$4.25-million, which is US$350,000 less than his previous deal. “They didn’t really have a whole lot of conversations with us. At the time it was frustrating, but thinking about it now, everything happens for a reason.

“Coming to Montreal and being part of this team and this group, I’m really excited.”

Toffoli said he’s familiar with Montreal from his time playing junior with the Ottawa 67’s of the Ontario Hockey League and road trips with Kings and Canucks. His agent, Pat Brisson, also spoke with Toffoli and his wife, who’s from California, about how much they would enjoy life in Quebec.

“Every time I’ve been to Montreal and played, it’s been really exciting,” he said. “The rink … it’s different. There’s not many arenas that have the same electricity as the Bell Centre.”

Donning the iconic red, white and blue Montreal jersey won’t be anything new for Toffoli, who grew up playing for the Toronto Jr. Canadiens in the Greater Toronto Hockey League.

“A couple my old friends sent me a few old photos,” he said with a smile. “Maybe I’ll post some of them on my social media.”

The scrappy Canadiens – the 24th of 24 teams included in the NHL’s summer restart – upset the Pittsburgh Penguins in the qualifiers before falling to the Philadelphia Flyers in a hard-fought six-game series in the first round.

That performance turned Toffoli’s head as he watched from afar in the Edmonton bubble.

“The skill that they all showed, especially throughout the playoffs, was impressive,” he said. “That was definitely one of the deciding factors of why I wanted to be in Montreal.”

The Canadiens also made a couple of important moves before free agency, adding backup goalie Jake Allen from St. Louis and defenceman Joel Edmundson – a pending UFA who then signed a four-year US$14-million contract extension – from Carolina via trade.

But the biggest splash came when they dealt forward Max Domi to Columbus earlier this month for winger Josh Anderson, who promptly inked a seven-year US$38.5-million contract extension.

Put it all together, and Montreal was the place Toffoli wanted to be – even if he’ll be in the unfamiliar position of living under a hockey microscope.

“You look at the players on the team and what they’ve done this off-season,” he said. “It’s an exciting time to be Canadien.” 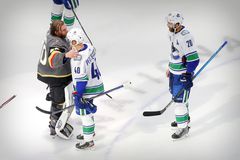 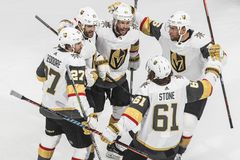