The party leading the race to form Quebec’s next government is doubling down on a controversial policy that would test immigrants for Quebec values before allowing them to stay in the province permanently.

The Coalition Avenir Québec also now says it would rely on Ottawa’s co-operation to expel or relocate undesirable immigrants to ensure compliance with the policy. However, the federal government seems unlikely to support the plan.

Quebec’s next provincial election is fixed for Oct. 1 and the CAQ under François Legault has led the Quebec Liberals under Philippe Couillard in numerous polls since last fall. With issues that usually dominate elections on the backburner – public finances are in order, the economy is growing robustly and the issue of Quebec independence is dormant – the main parties are staking out positions as protectors of “Quebec values” in advance of the vote.

The right-leaning CAQ, which is trying to position itself as the protector of the French language and secular values, is taking a harder line on immigration than other parties.

The immigration platform − first leaked this week to news magazine l’Actualité − confirms Mr. Legault’s promise to test Quebec values and French language comprehension and adds a requirement that immigrants find work or document their hunt for it. The values tested would include respect for diversity, democracy and secular government among other values the party considers core to Quebec identity.

Immigrants would have to pass the values, language and employment test within four years to receive a Quebec selection certificate – a document that is the first step to gaining permanent residence in the province under the immigration program it shares with Ottawa. Those who flunk would be handed off to Ottawa for relocation or expulsion under the CAQ proposal.

Under the agreement with Quebec, the province selects most non-refugee immigrants while Ottawa is in charge of establishing if they’re admissible to Canada. It’s not clear how the CAQ plan would work under that division of labour. Justin Trudeau’s government did not rush to embrace the CAQ plan, instead lauding the important role immigration plays in growing the economy amid labour shortages and an aging population.

Mathieu Genest, a spokesman for Immigration Minister Ahmed Hussen, said the minister is “aware of recent reports of the CAQ immigration proposals, and we continue to follow the file closely.‎”

The CAQ plan would also cut Quebec’s immigration quota by 20 per cent, to 40,000 new arrivals per year.

Quebec’s Liberal Premier Philippe Couillard called the CAQ plan a product of muddled thinking that barely merits being called a rough draft. The Liberals have taken a more inclusive stand, saying tests send the wrong message and that immigration is vital in a province with slow population growth.

“Their platform is not even applicable, it’s riddled with errors. But the biggest issue is the plan approaches immigration as a problem that needs to be solved when it’s an incredible opportunity,” Mr Couillard said. “Mr. Legault needs to stop hiding and start explaining how his plan would work.”

Mr. Legault wasn’t available for comment Tuesday but the CAQ critic on the immigration file, Nathalie Roy, confirmed the outlines of the plan to reporters in Quebec City and insisted it’s always been Ottawa’s job to deport unqualified immigrants.

In a statement issued later, she said the unemployment rate of immigrants is double that of citizens, many fail to learn French and one quarter of them leave the province. “Our goal is to ensure when they get settled here permanently is to make sure they speak French, adhere to our values and want to work,” she said.

She said Mr. Couillard is the one with muddled thinking, saying he “wants to sweep the problem under the rug.”

Paradoxically, Mr. Legault’s party has advocated dropping French-language requirements for new immigrants to favour technical and professional skills the province lacks with its low unemployment and growing economy. Under the party’s plan, a CAQ government would boost funding for training that would include paying people to take language courses.

The Parti Québécois – languishing in distant third place in recent polls – would beef up language requirements for immigrants while eschewing tests or deportations. “The CAQ is proposing things that will not happen, cannot happen and couldn’t ever be applied,” Leader Jean-François Lisée said. “They’re putting up a smokescreen for voters.

Globe editorial: The Quebec election is coming. So are the identity politics
April 16, 2018 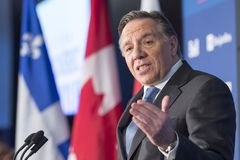 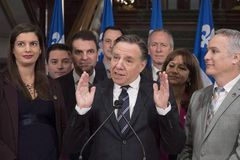 François Legault and CAQ trying to be 'more pragmatic than left or right' as Quebec election looms
December 15, 2017 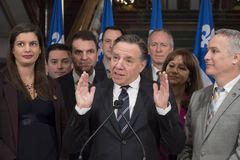