Lawyer Olga Redko argued Bill 21 violates the sexual equality guarantees in the Canadian Charter of Rights and Freedoms – which are not shielded by the notwithstanding clause that the province has invoked to avoid court challenges.

Virtually all the people affected by the law so far are women teachers who can’t find work because they wear the Islamic head scarf, Ms. Redko told the three-judge Quebec Court of Appeal panel. “This law was applied … and the impact is overwhelmingly – if not exclusively – on women.”

Quebec’s secularism law prohibits public sector workers deemed to be in positions of authority, including teachers and police officers, from wearing religious symbols at work.

A national Muslim organization, a civil liberties group and a university student who wears the hijab failed in Superior Court to have the central components of the law suspended while their full legal challenge is heard. Superior Court Justice Michel Yergeau ruled July 18 that the groups and the student did not demonstrate Bill 21, adopted last June, was creating enough damage to warrant a stay.

Yergeau noted in his July ruling that the plaintiffs were severely limited in their stay application because Bill 21 invokes the Canadian Constitution’s notwithstanding clause. That clause prevents citizens from challenging a law for violating parts of the charter that protect fundamental rights and freedoms.

On Tuesday, Ms. Redko cited Section 28 of the charter, which states the rights and freedoms in the document are guaranteed equally to men and women. That section is not covered by the notwithstanding clause.

Ms. Redko told the appellate court “the factual situation has changed” since the Superior Court hearing, when her legal team didn’t raise the Section 28 argument. Since the law went into effect, she said, it has become increasingly clear that the vast majority of people affected are women who wear the hijab and who want to be public school teachers.

“So far, the only people whose rights this law has infringed are women,” Ms. Redko said, adding that she submitted numerous affidavits written by women who said they are suffering irreparable harm due to Bill 21. They can’t find work or have had to leave the province, she said.

The nine new affidavits tell stories of Muslim women incapable of working as teachers because of their faith. One woman, whose name was not included in the document provided by lawyers to The Canadian Press, said she was hired by a school in Quebec only to be let go a few days later. “The head of school told me my candidacy wasn’t being refused, but simply the law was being applied,” she said.

Another affidavit was from a woman who applied and signed a contract in May 2019 to be a teacher at a Montreal school board. She worked as a substitute teacher until June but was then told she could no longer work because of her hijab. She said the law’s grandfather clause didn’t apply to her because she was hired after the legislation was tabled.

“I feel as though I am the victim of an injustice,” the unnamed woman said. “My state of mind worries me. I don’t normally have such negative thoughts. This mix of anger and sadness scares me.”

Arguing on behalf of the Quebec government, Justice Department lawyer Eric Cantin said the Canadian legal system assumes that laws passed by elected legislatures are in the public interest. He said it’s rare for a court to issue a stay on parts of a law while its wider merits are considered.

Mr. Cantin said even if people are suffering harm due to a law, that doesn’t give judges the right to suspend the legislation. For a court to issue a stay, he said, the irreparable harm caused to people has to be “clear, flagrant … it has to jump out in front of you.” This case doesn’t meet that standard, he said.

Chief Justice Nicole Duval Hesler said from the bench that she and her two colleagues need to weigh the harm done to Quebec society if the law is suspended against the harm caused to female teachers if the law is maintained.

“What is the balance of convenience?” she asked. “The visual allergies of certain people or the fact that teachers lose the right to enter into the profession of their choice?”

Chief Justice Hesler said the court would take the case under deliberation and rule in the coming weeks or months. 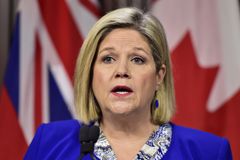 Quebec separatism is dormant, but the politics of division is more alive than ever 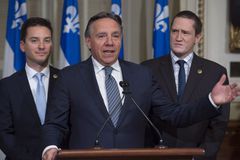