Eboney joined her boyfriend on his short trip across the B.C. border to a Washington mall, pulling into a free parking-lot space among the other non-descript vehicles. She didn’t notice that some cars had people waiting inside.

No sooner had Eboney stepped out than tens of officers – local police, state patrol, Drug Enforcement Administration and U.S. Immigration and Customs Enforcement – emerged from their unmarked cruisers with guns drawn, yelling orders to get on the ground.

“When that happened, I was put into the back of a police car – and I’ll never forget – the guy that was in charge came over and he knocked on my window and he said, ‘I hope you love this guy, because he just took away a big part of your life,’” said Eboney, now 36. (The Globe and Mail is identifying her by first name only to protect her safety.)

Her then-boyfriend’s 2006 trip turned out to be a drug deal. Eboney spent her 25th birthday in jail on charges for failing to report a crime, and served eight months of her sentence in a U.S. federal prison.

Today, Eboney tells her story to classrooms of young women, alongside Vancouver Police Department detectives Anisha Parhar and Sandy Avelar. In December, 2017, the veteran gang investigators co-founded an outreach and prevention program called Her Time after years of observing how young women affiliated with gangs fly under the radar.

From firearm couriers, drug mules, baits and decoys, to prostitution recruiters, women have long been employed by male-dominated street gangs to advance criminal operations. But while police are seeing more girls emerge from the sidelines, flaunting criminal allegiances and lifestyle spoils on social media, women have managed to stay mostly invisible to the benefit of gangs.

“Girls have taken on more of an active role within the gangs, whereas before they were just the girlfriends," said Acting Detective Sergeant Steven Kerr of the Toronto Police guns and gangs unit. “Before social media, Instagram and Twitter … you wouldn’t know any different, but now they’re actually displaying their affiliation.”

Det. Sgt. Kerr has seen a noticeable shift over his 17 years on the force and he said “now, these girls are holding [weapons], and they’re committing some of the assaults and the attacks that are happening throughout our city."

In 2016 and 2017 across the country, 13 women were accused of committing gang-related murders, according to Statistics Canada, and another 23 were killed in them. But gun and drug trafficking, where women are less likely than men to rouse suspicion, are more common.

In Toronto alone between 2012 and 2017, 388 women were arrested on various illegal firearm possession charges, with another 67 charged in the first half of 2018, according to Toronto Police data obtained by The Globe through a Freedom of Information request.

The data do not indicate whether these arrests were gang-related, but a recent Toronto Police project offers a glimpse into the roles of female players. Of 75 people arrested during June, 2018, raids on the Five Point Generalz street gang, at least 12 were women, charged with trafficking and possession of guns and drugs, including cocaine, heroin and oxycodone.

Two Toronto women formerly involved in the drug trade spoke to The Globe, which is not naming them to protect their safety.

One woman, 24, recounts entering “the Game” – street terminology for the gang lifestyle – at 13 to pay for a new pair of shoes, later earning as much as $400 a day from drug sales.

“We had more freedom [than men]. We weren’t worried about the police. I could walk with crack in my pocket and not have to worry about tucking it in because no one’s going to search me,” she said.

She credited community programs for connecting her with work opportunities, paving her way to a university education. “A place like this is probably the thing that helped me get out in one piece,” she said about the St. Stephen’s Community House, a social-services hub in downtown Toronto.

The second woman’s trajectory into the Game also began at 13, when a young man at a community centre needed to stow away his gun after spotting police outside. She complied, eventually being introduced to selling drugs by another man four years later.

We had more freedom [than men]. We weren’t worried about the police. I could walk with crack in my pocket and not have to worry about tucking it in because no one’s going to search me.

“They’d give me money for being with them in the car while they go dropping off the packages” of heroin or marijuana, said the woman, 21.

While these women managed to escape the Game without criminal convictions, male gang members often use women to insulate themselves from jail time. And some girls use jail as their way out, said Ashlin Kelly, a University of Ottawa criminology graduate, who interviewed gang-involved girls as part of her 2015 master’s thesis.

One woman she spoke to was in a gang that “was so dangerous and the repercussion for leaving the gang … was so strong that committing a crime and going to prison was the safest option she had," said Ms. Kelly, a writer with the federal government.

Female gang members are most useful when their services are kept out of the spotlight. “That’s why [women] make the perfect pawns," she said.

A lack of female-focused gang programs represents a missed opportunity to address gender-based violence such as sexual abuse and prostitution, said Bryonie Baxter, former executive director of Ottawa’s Elizabeth Fry Society, an organization that provides support to women in or at risk of going through the justice system.

“There are no exit programs for women precisely because they’re simply not on the radar. They’re not shooting people, so they’re not seen as an emergent, immediate need,” Ms. Baxter said. “If we’re not providing the right supports for them when they come out, they will inevitably end up back there, either voluntarily or involuntarily."

Back in Vancouver, Detectives Parhar and Avelar are already seeing the impact of their program. The duo was invited to present it to the National Gang Crime Research Center in Chicago last summer and hope to expand Her Time to other Canadian cities.

They regularly hear from young girls about how it changed their lives. And perhaps, even spared them.

“Here are some girls that have actually lived it and been lucky enough to survive,” Det. Parhar says of her guest speakers, “because these five other girls that we’re showing you on our screen right now, one’s a paraplegic and the other four are dead.” 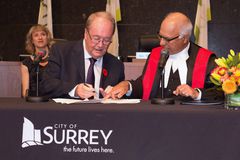 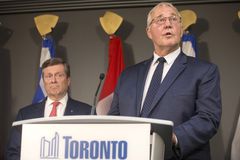 Ninety-four charges laid after police bust alleged drug ring in B.C.
August 14, 2018
Follow us on Twitter @globeandmail Opens in a new window
Report an error Editorial code of conduct
Due to technical reasons, we have temporarily removed commenting from our articles. We hope to have this fixed soon. Thank you for your patience. If you are looking to give feedback on our new site, please send it along to feedback@globeandmail.com. If you want to write a letter to the editor, please forward to letters@globeandmail.com.
Comments