Ordinary people have long been shut out by political and capitalist elites who have done them immense harm, the former strategist who helped Donald Trump win the White House told a protest-delayed debate in Toronto on Friday.

Denying Trump or his supporters are racist, Steve Bannon called populists the true anti-fascists because, he said, fascism looks to worship the state.

Bannon slammed what he called the “great elites of the permanent political class” for causing the devastating financial crisis in 2008 and waging endless wars like the one in Afghanistan. Those same elites consider the populist movement to be made up of racist, nativist xenophobes, he said.

“Well, it’s not. They’re the backbone of our country, the most decent people on Earth,” Bannon said during the 90-minute debate.

Bannon’s opponent, conservative commentator, David Frum, conceded that liberal democracy was in trouble for many of the reasons Bannon outlined. However, he said, Trump and populism should not be the answer.

“The failures of a good system are no reason to turn to an evil one,” Frum said. “We have to renew and repair.”

Frum accused Bannon and Trump of using code words to incite antipathy toward Jews, blacks and immigrants – something Bannon denied.

Police outside the downtown auditorium made several arrests as chanting protesters slowed attendees from getting inside. Video on social media showed officers using batons to hold back the crowd, and one photo showed an officer using pepper spray. Police reported no injuries.

“I think the people of Toronto have shown how they feel about the far right,” said David Langille, who was among those protesting outside. “We want to protect our democracy – it’s very important.”

Bannon, 64, the former executive chairman of right-wing Breitbart News, helped Trump win the 2016 presidential election and was White House chief strategist for eight months until August 2017. Critics have branded him a racist and anti-Semite, epithets he has rejected.

Frum, 58, a senior editor at The Atlantic magazine, was a speechwriter for ex-U.S. president George W. Bush. The Canadian-American is also the author of the recent book “Trumpocracy,” which sharply criticizes the current American president as a threat to democracy itself.

Trump has abused the political process and the media to usurp power and is “slowly corroding” institutions, Frum said.

The debate played out just ahead of the fiercely contested midterm congressional elections in the United States on Nov. 6. Organizers said about 2,700 people paid to attend, while perhaps as many as 10,000 more watched via livestream.

The proposition the two men debated, with Bannon in favour and Frum opposed, was: “The future of Western politics is populist, not liberal.”

In his opening statement – interrupted by a shouting protester – Bannon gave a nod to the demonstrators outside for exercising their free-speech rights, before warning that society was on the verge of a “revolution.”

What Bannon and Trump are promoting is a scam and lie, Frum shot back, adding that populist leaders – including Bannon’s former boss – are “crooks.”

“Does the kind of politics that Steve Bannon is speaking for and President Trump articulates … offer me anything?” Frum, who accused populists of cruelty, said to audience applause. “It offers you nothing. It does not care about you. It does not respect you.”

Despite Frum’s effort, Bannon appeared to be more persuasive. At the start of the debate, 28 per cent of those in the audience indicated they were in favour of the idea that populism was the way of the future, while 72 per cent were opposed.

Opinion in the audience did not change. After the debate, 28 per cent were in favour, with 72 per cent opposed.

Friday’s event – part of the decade-old Munk Debates – was announced just days after Bannon was dropped from the speakers list at this month’s New Yorker Festival after an intense backlash and threats of a boycott by other guests. Critics in Canada also opposed allowing him to air his views.

Despite the blow-back, the debate chairman and moderator, Rudyard Griffiths, stressed what he called the importance of allowing vigorous discussion of hot topics to allow the public to make up its own mind.

While the event was sold out, the theatre was barely half full at the scheduled start time. Organizers explained the half-hour delay by saying they wanted to ensure everyone was safe.

Audience members each paid up to $100 to attend the debate, although some resellers were asking several times the value on Friday. Aurea, the charitable foundation behind the event, says it supports public-policy organizations that, among other concepts, advance free markets and the protection of democratic values. 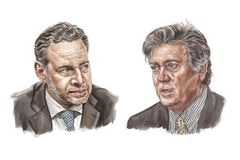 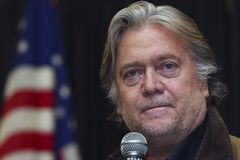