As Leah Austin puttered around her backyard in Tofino, B.C., in early December, she softly called out to her chickens as if they were her children.

“Here, chick-chick – I brought you a treat,” she said to one. “Good girl – laying an egg,” she praised another.

Lovingly referred to as the “crazy chicken lady” by locals in town, Ms. Austin has been keeping chickens on the west coast of Vancouver Island for the past 10 years.

While pregnant with her daughter, Gemma, Ms. Austin started dreaming up ways to teach her child about where her food came from. The chickens don’t just provide her family with food, but they also eat any kitchen scraps and their manure enhances the soil of her garden. “It feels like it’s a bit more of a closed-loop system in my little backyard hobby farm,” she said. “The biggest joy is experiencing this all with Gem and [seeing it] through her eyes.”

Starting out with only a few chickens, Ms. Austin’s flock has gradually evolved over time. She now shares 15 to 20 chickens with four neighbourhood families.

The growing interest in backyard chicken-keeping on the coast spurred Ms. Austin to start putting on “chicken socials” once a month at the Tofino Botanical Gardens, where people could talk chickens over cookies and tea. From how to build a coop to how to clip chickens’ wings, there was no shortage of conversation.

But as quickly as the socials began, COVID-19 shut them down.

Announcement of the pandemic induced panic buying, leaving grocery store shelves bare, quickly cleared of basics such as eggs. With many finding themselves with extra time and a growing interest in food security, Ms. Austin’s phone wouldn’t stop ringing with people asking her how to raise chickens of their own. “People were thinking in a more homesteading kind of way,” she said. “They were looking at how to bring a little more food to their table.”

In response, Ms. Austin moved the chicken socials to Zoom, which grew from around six people to often more than 10.

From as far away as Ontario, attendees would tune in while shooing raccoons out of their coops, or with their chickens right next to them on the kitchen counter.

More than a year ago, Lauren Howard-Tripp and her partner, Colin Robinson, bought their home in Ucluelet, B.C. It came outfitted with a dilapidated chicken coop in the back corner of their yard, triggering a desire to have chickens of their own. They incubated eggs in their home office and got to work building a new coop.

“We were literally counting them before they hatched,” Mr. Robinson said with a laugh, noting that only eight of the 12 eggs they incubated actually hatched.

Recently, one of their chickens got sick. To nurse it back to health, Mr. Robinson massaged its crop (a small pocket near its breastbone where chickens store their food after it’s swallowed) every day, three times a day for a week.

Leaning on the chicken socials for support, he said that six months ago he never could have imagined engaging in an hour-plus conversation about chickens over Zoom. Now, it’s something he looks forward to.

Although the couple did not hatch chickens with the intention of becoming more self-sufficient, Ms. Howard-Tripp said the ability to grow some of their own food, while giving the chickens a good life and being able to share home-raised eggs with their friends has become part of their ethos.

Chickens certainly take on personalities of their own, Ms. Austin said, adding she has become familiar with the different pitches of her chickens’ coos when a raccoon is near, or when they’re getting ready to go and settle on the roost.

She has grown attached to their backyard chatter – and their companionship.

“I just couldn’t imagine not having them now,” Ms. Austin said. “It would feel like my backyard was so boring – I wouldn’t even want to go back there.”

Thinking about raising your own backyard chickens in Toronto? Consider these tips
October 6, 2017 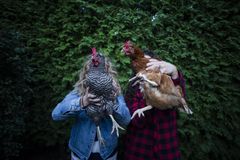 As backyard chickens grow in popularity, pests hitch ride to take a bite out of dogs and cats
July 30, 2014 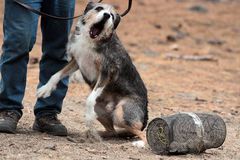 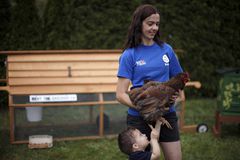