Interferon, a drug that has been examined in recent months as a potential therapy for COVID-19 with mixed results, is facing what may be the most definitive test yet of whether it can reduce the spread of the disease.

Researchers in Canada, Australia and Chile are collaborating on a clinical trial that will involve administering the drug as a prophylactic to households where one person has recently tested positive for the coronavirus. The design of the study, set to begin next month in the Chilean capital of Santiago, means that scientists could have results in hand in as little as four weeks after its launch.

“This is the best trial I’ve ever been involved in,” said Eleanor Fish, a researcher with Toronto’s University Health Network and a co-investigator on the study. “Once and for all, we will have an answer whether interferon treatment for COVID-19 is effective early on.”

Interferon refers to a class of molecules that are produced naturally as part of the body’s innate immune response. Among other roles, they are released by host cells to target viruses and activate immune cells when a viral infection is under way. Some viruses, including coronaviruses, have evolved the capacity to disable interferon production. The strategy behind administering the drug is to resupply what a virus has prevented cells from generating on their own.

The Chilean trial will track the progress of COVID-19 in 310 households. In half of those households, eligible participants between the ages of 18 and 80 will be given interferon within 72 hours of someone in the house testing positive for coronavirus. They will also receive two more doses at six and 11 days after the first, covering the interval when an infection would be expected to take hold. The other households in the study will serve as the control group for the experiment and receive standard care.

The aim of the study is to see whether those who receive the drug before symptoms manifest are able to clear the virus more quickly and reduce their potential to spread it to others.

“The primary objective is to contain the virus [by] decreasing viral shedding and decreasing the proportion of household contacts,” said Arturo Borzutzky, a co-investigator and immunologist at the Pontifical Catholic University of Chile.

If it proves effective, the advantages of interferon as an option for preventive treatment of COVID-19 are considerable. For example, the trial in Chile will use a version of the drug known as interferon beta, which is already available to patients and approved by regulatory agencies for use in the treatment of multiple sclerosis.

Dr. Fish has studied the potential for interferon to inhibit coronaviruses since the 2003 SARS outbreak in Toronto. Early in the COVID-19 pandemic, she was involved in a small clinical trial in Wuhan, China, which showed that interferon reduced the time that the disease was infectious in patients by about one week. With case counts relatively low in Canada, she began working with counterparts in Australia on an interferon trial that was to take place there, but changing case numbers again thwarted the plan.

Chile, which was been hit relatively hard by COVID-19 during the summer and is currently reporting about 1,700 new cases a day, is now the focus of the study, which is supported through a fund established by the Melbourne-based mining company BHP.

A less promising development came last week with the release of interim results from the large-scale global SOLIDARITY trial organized by the World Health Organization. Interferon was among the repurposed drugs tested in the trial for effectiveness against COVID-19. The results showed no reduction in mortality or duration of illness among more than 2,000 patients who were in hospital with COVID-19 and who received interferon beta, alone or in combination with another drug, at various stages of infection.

“We’ve conclusively ruled out the possibility of benefit from that regimen,” said Srinivas Murthy, an investigator with the BC Children’s Hospital in Vancouver who led Canada’s participation in the trial.

No Canadians were given interferon during the trial and at this stage there are no plans to do so, Dr. Murthy said.

Dr. Fish said the use of interferon in patients who are sick enough to be in hospital does not show whether the drug is effective in reducing the amount of virus during early stages of infection, as the Chilean trial is meant to do. In particular, she said, once patients are on oxygen or mechanically ventilated, “the disease has progressed beyond the viral phase, where different medications will have therapeutic benefit.”

A smaller clinical trial in Britain using an inhaled form of interferon in the early stages of infection showed that the drug was able to prevent infections from worsening. Researchers behind that study, based at the University of Southampton, are now expanding to a larger trial involving other European centres.

Dr. Murthy said that while the SOLIDARITY trial did not rule out the possibility that interferon can have a positive effect as an early treatment for COVID-19, researchers also need to prioritize therapies that appear to have a higher chance of working. This includes monoclonal antibodies, which gained attention when they were used to treat U.S. President Donald Trump. They are now being considered for inclusion in the SOLIDARITY trial and may be offered to Canadian participants. 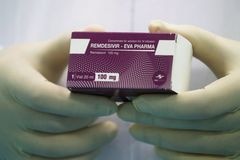 WHO study says remdesivir did not cut hospital stay or mortality in COVID-19 patients
October 16, 2020 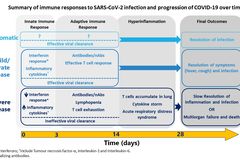