The City of Ottawa is planning to spend millions more to address public anger over problems with its new $2.1-billion LRT system.

The city’s draft 2020 budget, released Wednesday, includes a $7.5-million increase to the transit budget, primarily for an additional 40 buses to alleviate overcrowding and reduce route cancellations that have coincided with light rail’s launch.

Ottawa Mayor Jim Watson acknowledged that many riders are unhappy with the first few weeks of the new LRT system.

“We’re going through some pretty significant and frustrating growing pains and that’s why we’ve put additional dollars in to help get some of the pressure off the customers that have had a bad experience,” Mr. Watson told reporters after releasing the draft budget.

The city’s celebrations after the Sept. 14 launch of the long-delayed light rail line didn’t last long.

Within weeks, a series of delays took some of the shine off the new train. One particular low point was back-to-back shutdowns in early October in which some riders hopped fences to escape the dense crowds that swell at transfer stations each time there is a significant delay.

The mayor told reporters that rider complaints should be put into perspective.

“There are a lot of people who are upset and obviously angry because of bus issues, bus-train connections, train breakdown issues, but the vast majority of people have actually had a good experience,” he said.

“When it works, the LRT is absolutely lovely,” said Kari Glynes Elliott, a co-founder of the recently formed Ottawa Transit Riders advocacy group. “I mean, it is really nice. It’s fast. It’s quiet. It’s efficient. It’s really great. My concern is there’s been a huge amount of secrecy about the train. … I’m concerned at what corners they have cut. I’m concerned that they have rushed this for political reasons and there may be underlying issues that are bad about the train.”

Mr. Watson said last week that he was “furious with the poor performance of our LRT system,” but those comments quickly prompted questions of whether the mayor and city staff should have been more demanding in August when the system went through a final trial period.

The 12.5-kilometre electrified line includes a 2.5-kilometre tunnel running under the city’s downtown core. City officials promised transit riders that bus schedules would be far more reliable once the train tunnel replaced the rush-hour logjam of buses through the downtown core.

Yet weeks after the train’s launch, riders are still fuming over buses arriving late or sometimes not at all.

The city’s transit system relies on the existing network of buses to bring riders to transfer points in the east at Blair Station and west at Tunney’s Pasture, where they complete their journey into the city by train. Eventually, a second and possibly third phase would push the train network into the city’s suburbs.

Ms. Glynes Elliott said the more pressing concern is the buses, not the trains.

“The number one complaint of our members has been that buses that used to run every 15 minutes are now running every half an hour, and with buses that are frequently cancelled, that means some people can be waiting an hour for buses,” she said.

As well, three weeks after the system launched the city removed the parallel bus routes into the downtown, forcing almost all riders onto trains.

The two main transfer points are a major focal point of rider frustration. During the afternoon commutes, the stations can be overwhelmed by crowds of people leaving the trains in search for their bus ride home.

City officials provided a blunt assessment to councillors on Wednesday, warning that problems will continue and laying most of the blame on Rideau Transit Group, the private consortium the city hired to run the train system for the next 30 years at a cost of about $4-million a month. The city is withholding some payments to the consortium in protest.

They also insisted that in terms of on-time performance percentage, Ottawa’s record is currently better than transit systems in Toronto, Vancouver, Calgary and Seattle.

Other data suggest a less favourable comparison. A recent calculation by the CBC found Ottawa’s LRT has faced at least 15 delays of more than 30 minutes since launch.

That information can be compared with public data from the City of Calgary, which is similar in size to Ottawa and has had an LRT system since 1981. Over the 12-month period ending in June, Calgary’s CTrain system averaged 2.7 delays a month that were greater than 30 minutes. 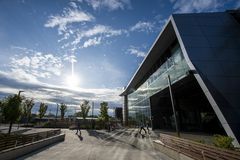