In a major new effort to tackle what it’s calling a climate-change emergency, Vancouver is looking at blocking gas-powered cars from certain parts of the city, discouraging builders from dedicating so much space to concrete-intensive basements, and adding 500 electric bikes to the city’s bike-share program.

City planners and engineers have recommended those measures and dozens of others as possible ways of meeting an aggressive effort to drastically cut Vancouver’s greenhouse-gas emissions by 2030.

“We know there’s a lot of concern about climate change. We’re trying to signal that we can move on those challenges,” said Matt Horne, the city’s climate policy manager.

Vancouver is one of several cities in North America and Europe, including London, England, Los Angeles, Berkeley, Victoria, Richmond, B.C., Hamilton and Montreal, to have declared a climate-change emergency. The vote in January on that declaration was the trigger for this week’s report on how to accelerate changes.

It also follows the October, 2018, report from the International Panel on Climate Change, saying the world’s citizens only have 12 years to keep global warming to a maximum of 1.5 C higher than pre-industrial levels.

City staff acknowledge measures recommended in the report are ambitious and may generate some negative consequences. City councillors vote Wednesday on whether to ask staff to draft a detailed plan by fall 2020 on how to proceed on the recommendations.

“This will push the limits of what staff think can be accomplished in the next decade and staff realize that there will likely be political, financial and ‘pace-of-change’ challenges to their implementation,” the report said.

But, according to councillors and staff, it’s worth trying to push the boundaries to show other cities and countries what can be done about climate change.

Vancouver’s plan for greenhouse gas emissions would affect every resident

Affordable housing in Vancouver can only happen under new rental program, Stewart says

“We need to report back on the level of difficulty and whether the pace of change is feasible,” city manager Sadhu Johnston said. “We’re not going to single-handedly save the world but we can be a global leader.”

Councillors from the Green and OneCity parties are willing to go hard.

“I do think the public is ready. They see the reports on the urgency and then the lack of action,” OneCity’s Christine Boyle said.

The Greens’ Pete Fry said the plan is very aspirational and “some of the targets are pretty aggressive. I’m not sure we’re going to meet the targets.”

But he, too, thinks many in the public are ready for more dramatic action.

And Non-Partisan Association Councillor Melissa De Genova said that, while all councillors need to be prepared to make tough decisions on climate-change issues, she does wonder if some of the initiatives might not have unintended outcomes, particularly for housing.

She worried that adding more requirements for energy-efficient construction, especially for developers trying to build the low-cost apartments that are in short supply, will drive up their already high cost.

The recommendations are a significant push beyond the Greenest City Action Plan that the former Vision Vancouver government initiated in 2011. That plan, then seen as aggressive, aimed to reduce by 2020 GHG emissions in the city to 5 per cent below 1990 levels. But it has moved only slowly toward its goals, with the most recent report showing only a 7-per-cent reduction in emissions since 2007.

Mr. Horne’s team is recommending that Vancouver endorse aggressive action through “six big moves” that would eliminate 1.2 million tonnes of greenhouse-gas emissions from the city every year.

That would be done largely by making buildings more energy-efficient and discouraging gas-powered vehicles through many different strategies.

Mr. Horne said the city would use incentives first to try to encourage changes, such as giving a 5-per-cent bonus in building floor space for those who are constructing zero-emission projects. 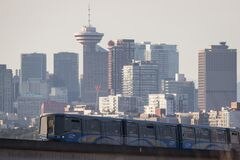