Most Torontonians know Eireann Quay as the road to the airport. This downtown street does lead to Billy Bishop Airport – but it also contains a school, community centre, park and memorial to the Irish presence in Canada.

The balance between taxis and public space began to shift on Friday. At a media conference, Mayor John Tory and local councillor Joe Cressy announced the construction of six separate projects in this area, centred on Ireland Park.

“This time next year, it will be safer, and more beautiful, and better connected to Toronto’s history,” Mr. Cressy said in an interview.

Those six projects, with a total budget of $15-million, include a new waterfront promenade and dock wall; a new public plaza and a new playground for the adjacent Waterfront School; a redesign of the airport’s taxi corral; changes to the streetscape; repairs to the 1929 Canada Malting Co. grain silos next door; and renovations to a 1938 office building on the site.

That building will become a cultural and interpretive centre run by the Ireland Park Foundation, a not-for profit that has been active in the area for more than a decade. The space will be “a front door to the city” for passengers arriving at the airport and “will celebrate and tell the story of the Irish in Toronto,” said the foundation’s chair, Robert Kearns. “People will be able to experience the best of Irish culture in all its manifestations.”

The architects for the project are Kearns Mancini, where Robert Kearns’s brother Jonathan is a partner; the firm also designed the adjacent Ireland Park. Opened in 2007, that space features sculptures by Irish artist Rowan Gillespie that memorialize the Irish migrants who arrived in Toronto during the famine of 1847.

Mr. Cressy emphasized bigger changes planned for the silos alongside the park and for the wider area. The city refers to the area as Bathurst Quay, and a masterplan has been under way for four years. “Until now, the area has languished, both through a lack of vision and a lack of short-term improvements,” Mr. Cressy said. The city “wanted to do something right away, so the area doesn’t wait while we’re waiting for governments to gather the funding.”

The larger vision for Bathurst Quay includes a new tenant for the Canada Malting silos, a landmark on the waterfront that has been empty for decades. The city will issue a request for proposals for the site next year, Mr. Cressy said, and the site will involve cultural uses; think of the Evergreen Brick Works or Wychwood Barns as a points of comparison.

There are other big moves in the offing as well if the plan is implemented. The airport’s pick-up and drop-off lanes would move underground, a new park would replace a parking lot and the area could get a new aquatic centre. Mr. Cressy suggested that aquatic centre should be linked to the existing Waterfront Neighbourhood Centre, which shares a building with Waterfront School. (That building, completed by Patkau Architects in 1997, is wonderful.)

The result of this larger vision should be excellent. Even if the airport remains in place for the long term, a redesigned public realm will lessen its considerable impact on students and neighbours. This would be a welcome and rare example of public agencies working together to create good public places. And it would deepen the city’s connection to one of its first waves of migration, the first of many – even as new visitors arrive every day, by air, into a city that keeps evolving. 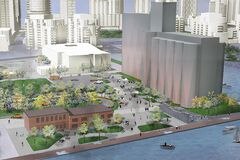