On the evening of Friday, Feb. 15, 1974, after the next day’s paper had been put to bed, The Globe and Mail’s managing editor, Clark Davey, marshalled his editorial troops and led them out the door of the old newsroom on Toronto’s King Street W. one last time. The following week, they would relocate to new offices on Front Street, and the gruff Mr. Davey, who had a gift for inspiring his staff, recognized the occasion called for a rousing demonstration of camaraderie. “The lights were going out, and he was singing Lloyd George Knows My Father at the top of his lungs,” the former Globe editor and reporter Michael Valpy recalled recently, referring to an English folk song often performed en masse while on the path to inebriation.

“He gave me a sense of joy of being a journalist that I hadn’t had before I arrived at the Globe and came under his suzerainty,” Mr. Valpy explained. Working with Mr. Davey, “I understood the mission of journalism. That was certainly how Clark approached it.”

For more than 50 years, tracing a steady arc from industrious cub reporter through to bulldog newshound, canny managing editor, protective publisher and then to éminence grise, Clark Davey embodied the mission of journalism as a fierce, vital and rollicking public service. As The Globe’s managing editor from 1963 to 1978, he reshaped the newsroom during a pivotal time, as journalism in North America discovered its ability to challenge governments and set the agenda. Under his leadership, the paper built an investigative operation that uncovered corruption, incompetence and scandals, winning two Michener Awards for public-service journalism.

He died in Ottawa on Feb. 25 surrounded by his family, less than one week shy of his 91st birthday.

Clark William Davey was born in the small southwestern Ontario city of Chatham on March 3, 1928. Growing up, he hoped to attend Royal Roads Military College in British Columbia, but after poor eyesight blocked that path, an astute English teacher opened another by suggesting he pursue writing instead. Admitted to the first class of the new journalism school at the University of Western Ontario, Mr. Davey graduated in 1948. By that point, he was already working for his old friend, Richard (Dic) Doyle, as a reporter at the Chatham Daily News.

He left his hometown and its paper in 1951 for a brief sojourn as the managing editor of the Kirkland Lake Daily News, but after his girlfriend, Joyce Gordon, told him to choose between Northern Ontario and a future with her, he returned south and landed at The Globe and Mail, where Mr. Doyle was working. The two men roomed together, returning to Chatham on weekends to spend time with their respective girlfriends. After one such interregnum in September, 1951, the men were headed back to Toronto on a train when it hit a truck, derailing the locomotive and four cars, including theirs. Stumbling out of the wreckage, Mr. Davey collected himself quickly and began to cover the disaster while Mr. Doyle ran off to telephone for a photographer.

Mr. Davey had a gift for being in the right place at the right time. In November, 1956, while covering the Suez Crisis out of the United Nations, he finagled a ride with Lester B. Pearson as the external affairs minister was taking a limousine from the airport into Manhattan. In the car, Mr. Pearson told him he believed Egypt was wary of accepting Canadian peacekeeping troops in the country because their uniforms looked like those of British soldiers. Mr. Davey asked if he could publish that intelligence; according to Mr. Davey’s son, Richard, Mr. Pearson told him it would be okay "as long as you don’t say where you got it.” (The following year, Mr. Pearson won the Nobel Prize for those peacekeepers.)

Mr. Davey distinguished himself covering the planning and construction of the St. Lawrence Seaway through most of the 1950s, as well as John Diefenbaker’s successful 1957 federal election campaign. He became close with Mr. Diefenbaker, going on a post-election fishing trip to Lac La Ronge, Sask. with the prime minister-to-be and two other reporters, as well as another such trip to Yukon after the snap election the following April.

After serving as editor of Ontario, national and foreign coverage, Mr. Davey was named managing editor of The Globe in 1963, where he commanded the operations of the newsroom – which included the ability to stop the presses.

Shortly after 3 a.m. on June 5, 1968, a night editor with The Canadian Press telephoned Mr. Davey awake with the news that U.S. politician Robert F. Kennedy had just been shot. Mr. Davey called the press foreman and told him to shut down the production line, which was just roaring to life for the final edition, then wrangled a news editor who lived near his house in Mississauga and told everyone who was still at the offices to stay put. “A call to the Press Club just across King Street from the Globe building produced an engraver and stereotyper having a late drink,” Mr. Davey wrote, in personal memoirs produced for his family. “I conscripted them.”

Within two hours, the paper had a new Page 1 and 2 laid out with breaking news of the shooting, and a photograph of the wounded Mr. Kennedy splayed across the front, the edition labelled EXTRA. Ever the gleeful competitor, Mr. Davey ensured a copy landed on the doorstep of J. Douglas MacFarlane, the editor of the afternoon newspaper, The Telegram. Mr. Davey recalled: “His call to me later that morning was filled with both expletives and congratulations.”

The hard-driving lifestyle took a toll. In the fall of 1969, Mr. Davey’s doctor diagnosed myocardial ischemia, a partial blockage of arteries, and gave him two options: change his ways or die. Mr. Davey chose the former, adopting a physical fitness regimen – including 200 step-ups a day – and cutting back on food and drink. It did the trick.

While Mr. Davey revelled in the daily rush, he built a lasting legacy by pivoting his newsroom away from merely reacting to events and covering the pronouncements of officials, toward the enterprising, investigative work – sometimes derided as “muckraking” – that nowadays drives so much of the news agenda.

He hired a string of brash reporters with a buccaneer spirit, including Victor Malarek and John Zaritsky, two crusaders who, according to author David Hayes’s 1992 book about The Globe, Power and Influence, became part of the crew known variously as Davey’s Hit Squad or Davey’s Raiders. On the night Bill Davis’s Progressive Conservatives swept into power in Ontario in 1971, taking 78 out of 117 seats, Mr. Davey and a handful of other reporters were drinking in his office, reflecting on the unchecked power the new government would command. Though Mr. Davey described himself, according to Mr. Doyle’s memoirs, Hurly-Burly, as being “somewhat to the right of Attila the Hun,” he was concerned about the erosion of democracy. According to Mr. Hayes, Mr. Davey told his reporters the election “means we’re going to have to be the official opposition in this province.”

That fall, and through 1972, The Globe ran a series of stories about conflicts of interest involving both municipal politicians and Mr. Davis’s cabinet, including one about a development company donating $50,000 to the Tories after receiving a government contract, and others about two provincial ministers benefiting from an increase in the value of land they owned because of government decisions they helped oversee. The series won the paper its first Michener Award.

In 1974, he hired Rosemarie Boyle, then only 21-years-old, as the paper’s first female police reporter. “I was not just to cover murders and crime,” Ms. Boyle recalled. “They were very keen on the [Toronto Police] force as an institution.” She was one of three women on a team of five reporters (the others were Barbara Yaffe, Peggy McCallum, James Jefferson and Oakland Ross) that produced a series of 70 news stories or features dealing with the state’s failure to protect children. With editorials by Mr. Ross and Jean Howarth, the series won the 1977 Michener Award.

Still, by 1978 Mr. Davey was feeling it was time for a change. He mused about going back to school for law, but felt it impractical; instead, he accepted a position as publisher of the Vancouver Sun. Later, he served as publisher of the Montreal Gazette and the Ottawa Citizen before retiring in 1991. When his successor at the Citizen, Russell Mills, was fired by then-owner CanWest for running an editorial critical of Prime Minister Jean Chrétien, Mr. Davey led a protest on the paper’s steps. “It meant a lot, because everybody in the industry knew who Clark Davey was, and his views and his opinions carried great weight around that time," Mr. Mills said.

After his retirement, Mr. Davey served as president and secretary of the Michener Foundation, which oversees the awards.

In 2009, Mr. Davey received a Michener Special Award of his own, presented by then-governor-general Michaëlle Jean, in recognition of “his talents and dedication in abundance through a lifetime that has exemplified the best in public-service journalism.” In his personal chronicles, he wrote that the award was “his most cherished professional recognition.”

Mr. Davey leaves his wife of 66 years, Joyce; three sons, Clark Jr., Kevin and Richard, a former newspaperman named after Richard Doyle; and their wives; six grandchildren; and his younger brother, Kenneth. He also leaves, in the basement of the Ottawa home he shared with Joyce, a “monster desk” that had belonged to Bob Farquharson, the editor who hired him for The Globe in 1951. After the paper moved its operations to Front Street, Mr. Davey scavenged the desk; it accompanied him for the rest of his career, from Vancouver to Montreal and finally Ottawa. Richard Davey said his father remarked that the desk was “the last link to another time, to a different kind of journalism.” 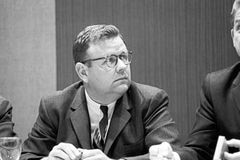