Residents stood in their yards, helping police officers and maintenance workers pick up items from their houses and pieces of debris off their lawns, still in shock from the evening’s devastating storm.

Along Prince William Way and Mapleview Drive in Barrie, Ont., dozens of houses were damaged and evacuated, trampolines were warped into an 8-shape, and a black Hyundai was flipped on its hood.

Thursday’s twister was the most devastating tornado the southern Ontario city of 200,000 had seen in 35 years, hospitalizing 11 people with non-life-threatening injuries, and forcing the inspection of about 140 homes.

Yet, amid the caution tape, insulation and small shards of glass, community members gathered on Friday with Tim Hortons coffee boxes, fruit baskets and toiletries in the parking lot of St. Gabriel the Archangel Catholic Elementary School to wait for their neighbours, displaced in hotels, to come back to the scene of the storm.

“Supplies are coming in droves,” said volunteer Chantal Huard, who relayed goods to the outside tent from a school gym overflowing with donations.

”These surroundings look bad, but everyone is coming together… we’re going to rally.”

Environment Canada confirmed on Friday that the tornado reached winds of 210 km/h, and had a damage path five kilometres long and 100 metres wide. In the otherwise quiet suburban neighbourhood, some houses were stripped of their roofs and siding, while others were unscathed as the tornado lost steam and moved east.

On Thursday afternoon, Natalie Harris tucked herself against the corner of a basement, tightly holding her 15-year-old son Adam for what she remembers as six long seconds. The wind above her was so loud she could not hear herself scream.

”It went through my mind that this might be the end,” said Ms. Harris, who ran down the stairs of her friend’s south Barrie home as soon as she spotted one of the most powerful tornadoes ever to hit Ontario creeping towards the front windows.

When the noise subsided, Ms. Harris, Adam and their dogs Walter and Millie went upstairs to see the house gutted and the roof gone, as pieces of dust fell from the sky. She texted her friend, who was out on an errand, that they were okay. An Environment Canada tornado warning lit up her phone a few minutes later.

”I can’t believe there were no deaths,” she said. “It looked like the apocalypse outside.”

A tornado warning was broadcast to local television, radio and cellphones at 2:38 p.m., just as the tornado was touching down, Environment Canada’s Ken Macdonald said.

Ideally, forecasters can get their warnings out 15 minutes before an event, Mr. Macdonald said. But the Barrie tornado evolved more quickly. “The predictability of the actual tornado event is still very limited. We acted to the first signs.”

As they surveyed the wreckage outside, neighbours and community members expressed relief and amazement that no lives were lost.

The mayor said residents started gathering food and water barely an hour after the tornado. On Friday, with the help of the Red Cross, the number of donations had grown so large that Barrie police asked people to hold onto their supplies to reduce waste.

”You see the character of a community on its toughest days,” said Mr. Lehman, who also expressed gratitude for the support of neighbouring communities and local and provincial politicians offering immediate assistance. Ontario Premier Doug Ford said on Friday that the province plans to help people whose homes are not covered by insurance.

Canada gets more tornadoes than every country except the United States, according to Environment Canada. In 2018, six tornadoes destroyed 50 homes and injured 25 people in Ottawa and Quebec. In Barrie, a tornado killed eight people in 1985, wrecking about 1,000 buildings.

Lots of work remains to repair Thursday’s damage. On Friday, Barrie building inspectors and engineers started going door to door to assess the structural integrity of homes that were in the tornado’s path. Police spokesman Peter Leon said 140 houses are damaged, many badly enough that residents have to leave.

”Our focus is securing the scene for now,” Mr. Leon said. “It might not take a day or a week or a month to rebuild the community, but we will get there, and these people will get back into their homes eventually.”

Many have checked into nearby hotels for now.

Denise Watson, who lives on Prince William Way, stayed the night at the Quality Inn after firefighters rushed her and her daughter out of their home minutes after the storm because of a suspected gas leak. She returned to her front yard on Friday morning to see the damage, which included scattered dust, debris and glass from the broken windows on her home and SUV.

”We’re just waiting to see when we can go in and salvage whatever we can,” she said. “I’m still in shock. It’s a nightmare, for everybody right now.”

Across the street from Ms. Watson, a plaza of small businesses is also battered. All that remained of the patio in front of Cicco’s Ristorante was shattered plant vases and two benches flipped on their sides. Co-owner Lindsay Weiss said the Italian restaurant’s indoor space was booked at capacity for the entire weekend for the first time in months, as Ontario moved to Step 3 of its reopening plan. Now, with most of the windows broken, she is not sure how long they will have to wait to reopen.

”This is our business, our livelihood,” she said. “For now, we have to help each other, until we know what the next move is.”

Death toll exceeds 125 while rescue workers race against time amid flooding in Germany and Belgium
July 16, 2021 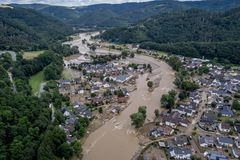