Quebeckers have elected a right-leaning government for the first time since 1966, choosing the upstart Coalition Avenir Québec while soundly rejecting the two parties that governed the province and drove Canadian national unity debates for five decades.

The CAQ, a collection of federalists and former separatists, including leader and long-time politician François Legault, swept vast regions of the province right up to the doorstep of Montreal to win a strong majority.

“Today we made history. Today many Quebeckers set aside a debate that divided us for 50 years. Today Many Quebeckers have demonstrated that it’s possible to make adversaries from yesterday work together for tomorrow,” Mr. Legault said in his acceptance speech.

The results were a historic reversal for a province where the Parti Québécois and Liberals dominated 13 straight elections and fought two referendums on independence that threatened to tear Canada apart. Both suffered record defeats in popular vote. This was only the third election for the CAQ and the first win by a right-leaning party since the Union Nationale 52 years ago.

Results map: A detailed view of the vote

Related: What the CAQ victory means for the Quebec economy

Opinion: CAQ win is an indictment of the province’s political establishment

Mr. Legault considers the CAQ a conservative party, but in many ways it defies labels and has moved steadily toward the centre. It includes former federal Conservatives, provincial Liberals and ex-péquistes, including Mr. Legault himself. The party campaigned on cutting taxes and immigration levels, but also promised to boost subsidies to the public daycare program to bring it back to an $8 universal fee. It favours maintaining Quebec’s carbon-pricing regime. It is pro-choice on abortion, but promised to raise the legal age for using marijuana to 21.

The CAQ’s candidates took suburbs near Montreal long held by Liberals and areas of sovereigntist rural heartland that had belonged to the PQ. Only in the big city did they fail to dominate: Montreal was mostly split between the Liberals and the left-wing Québec solidaire, although the CAQ was confirmed in one seat late Monday.

Liberal Leader Philippe Couillard wished Mr. Legault well as he conceded defeat in front of a somber, sparse crowd in Saint-Félicien, where he resides and won his seat. “We must remain united,” he said. "I’m leaving him a Quebec in financial health, ready for all challenges. I will pitch in for a harmonious transition. It was a great honour to serve Quebeckers.” Mr. Couillard said he will take some time to consider his future. "I am not bitter and I ask you not to be. I am proud and you should be also,” he said.

The result was particularly devastating for the PQ. The party of René Lévesque brought Quebec to the cusp of declaring independence with Jacques Parizeau in the 1995 referendum. The PQ, led by Jean-François Lisée, who apprenticed under Mr. Parizeau, was set to lose official party status with fewer than 12 seats. Mr. Lisée lost his own riding.

Prime Minister Justin Trudeau issued a statement congratulating Mr. Legault and saying he looks forward to working with him.

Mr. Legault, 61, renounced sovereignty about six years ago and says Quebec’s place is within Canada. But whereas Mr. Couillard was never shy to express his love of Canada, Mr. Legault is a nationalist, and says he will demand power from Ottawa.

Election day events pointed to the challenges for the CAQ government: The new trade agreement with the United States and Mexico would open the Quebec dairy and poultry industries to greater U.S. competition without eliminating the aluminum tariffs harming the province’s mills.

Mr. Legault said he would “explore all options” to defend Quebec’s interests.

In a second election-day development, Robert Lafrenière, the head of the province’s anti-corruption police unit, UPAC, resigned. UPAC is in turmoil over low morale, constant leaks and few arrests in recent months. Mr. Legault, a stringent critic of the Liberal corruption scandals under Jean Charest, was likely to replace him anyway, but the resignation will add urgency to get the unit back on track.

Mr. Legault promised quickest action on two top items. He said he will cut school property taxes by $700-million, which would decrease the average bill by $500, and introduce a per-child family allowance of $2,400 at a cost of $763-million. He also promised to hire thousands of teachers, speech therapists, counsellors and other specialized education professionals to help children with learning disorders and bring stability to classrooms.

“My first priorities will be around putting more money in Quebeckers' pockets, and second is education. I want to help each and every child with learning difficulties,” Mr. Legault said in his final campaign appearance.

Mr. Couillard’s Liberals made no new tax-cut promises, pledging instead to make sure public services were running smoothly. They also made a plea for re-election to carry on managing the province’s hot economy, robust real estate market, record-low unemployment and, according to the Parliamentary Budget Officer, the healthiest long-term outlook for public finances of any province. Voters were not listening.

The campaign launched on Aug. 23, and in the beginning was a match for the lazy summer days. The sovereigntist PQ pledged it would not hold a referendum on independence for at least four years, and the absence of the divisive issue, which had dominated elections since the 1970s, left a void.

The three leading parties tried to fill the space, making small, conventional promises. They pledged to increase spending on improvements to health and elder care and education while balancing budgets. There was little to help the casual follower discern the differences among the plans.

Quebeckers expressed a deep desire for change and the CAQ’s six-point lead did not budge until Sept. 6, when a Quebec identity issue popped up. Mr. Legault struggled for days to explain his plan to cut the province’s quota of immigrants by 20 per cent to 40,000, and to expel new arrivals who fail language and values tests. He cited the threat to the French language from newcomers speaking English as the rationale.

Mr. Legault finally admitted he did not know all the intricacies of his own policy but promised to learn. The unusual admission, combined with a solid debate performance, stabilized his support and allowed a major rebound.

What the CAQ win means for the Quebec economy
Subscriber content
October 1, 2018 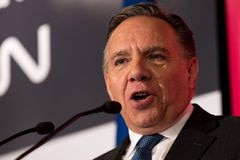 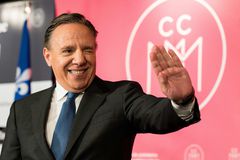 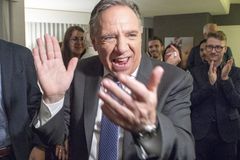