The break-up of a large portion of Canada’s Milne Ice Shelf in recent days marks a turning point for the Arctic and a likely indicator of what lies in store for similar formations around the globe including Antarctica as a result of climate change, experts said on Friday.

“The ice regime on Canada’s most northern coastline has changed,” said Adrienne White, an analyst with the Canadian Ice Service. “Large floating ice features are no longer viable.”

An ice shelf consists of a vast expanse of ice that is many tens of metres thick. While it is buoyed by ocean waters, it is fixed to the shore, creating landscapes and marine ecosystems that are unique to the world’s polar regions.

The north coast of Ellesmere Island in Nunavut once featured several such ice shelves that have endured for thousands of years. Since 2005, most have fractured and all but vanished due to rising Arctic temperatures. Their rapid demise has sent enormous city-sized blocks of ice drifting out to sea.

Prior to this week, the Milne Ice Shelf was the exception. It extends from a narrow fjord that bends away from the coastline, providing extra stability. But an unusually warm summer combined with a lack of sea ice that would otherwise push back and protect the edge of the ice shelf appears to have sent the entire formation past a crucial tipping point.

“I didn’t expect this one to go,” said Dr. White, who was the first to spot the collapse of the shelf using satellite imagery and who has worked on the Milne Ice Shelf as part of her PhD research. 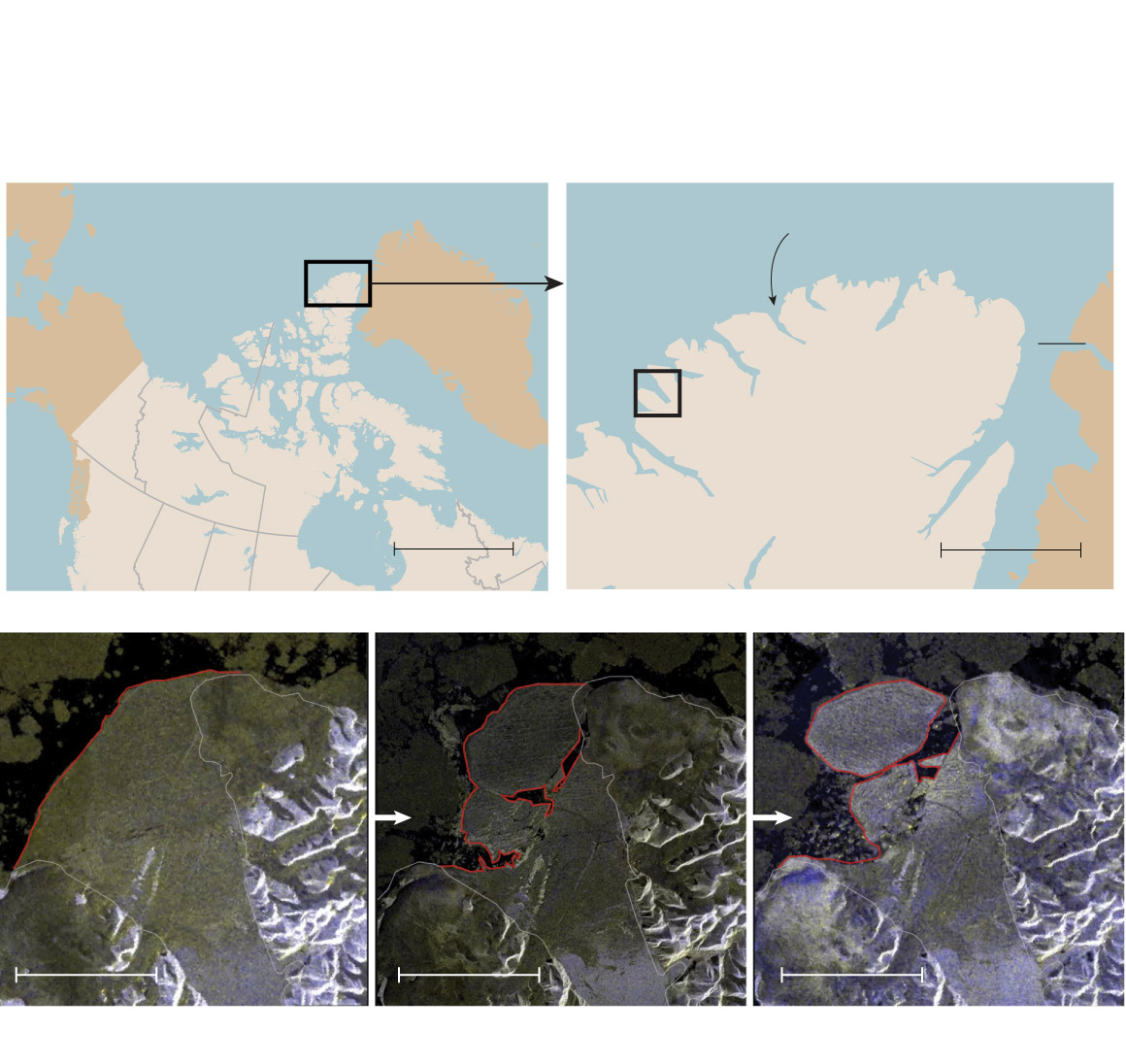 She said she first noticed something had changed on July 31, but clouds partly obscured what was happening to the ice shelf in the image that was available. The next day, the extent of the collapse became obvious. Details of the break-up have since been augmented by data from Canada’s Radarsat Constellation mission, a trio of satellites launched last year that can peer through clouds to obtain razor-sharp views of Arctic ice both night and day.

Over all, the ice shelf appears to have lost about 43 per cent of its total surface area. The largest piece to have broken away measures 55 square kilometres – nearly equal in area to the island of Manhattan. Dr. White said that where the pieces ultimately end up and whether they become hazards to shipping if they move further south will depend largely on Arctic winds.

Derek Mueller, a glaciologist and a professor at Carleton University in Ottawa, has been studying the Milne Ice shelf since 2008, including the unique environment produced when water flowing down from the land accumulates behind the ice shelf and forms a freshwater lake atop of the more dense saltwater below. The Milne Ice Shelf has the largest remaining body of this type – called an “epishelf lake” – in the Canadian Arctic. It is not clear if the lake has survived the break-up of the outer portion of the ice shelf, Dr. Mueller said.

A research site located further out along the shelf, where Dr. Mueller and his collaborators have more recently come to study a freshwater channel that is flowing along the bottom surface of the ice like an upside-down river, is now drifting out to sea.

Sensors and other equipment used to gather data at the site, including instruments that belong to collaborators at the University of California Davis, are likely now lost, Dr. Mueller said. He estimated the total cost of the equipment to be about $90,000.

“We took on a risk in putting it there but we also have two years of really amazing data that I don’t think anyone else has,” he said.

During those previous trips, Dr. Mueller and his team discovered underwater cavities in the ice where sea creatures that would normally be found living on the ocean floor, including anemones and sea stars, have carved out an unexpected niche. The marine life was to have been the subject of more detailed study this summer by Philippe Archambault, an Arctic ecologist at Laval University, but the COVID-19 pandemic forced the cancellation of most research expeditions to the Arctic this year, including to the ice shelf.

Dr. Mueller said he was especially sorry that the pandemic had caused his team to miss gathering measurements that may have immediately preceded the break-up of the ice shelf, though he added that he was just happy not to have anyone on the ice when the shelf gave way last week.

While the ice shelf is small compared to large chunks that have broken away from the Antarctic in recent years, its loss is a point of no return for a geographic feature that was once a hallmark of Canada’s High Arctic.

“These are rare environments that we’ll never get back,” Dr. Mueller said. “We can’t change the climate fast enough to save them ... but, if we can mitigate climate change, we could save other environments or slow down the speed of change.”

Jérémie Bonneau, a PhD student in coastal oceanography at the University of British Columbia, is among those studying the Milne Ice Shelf. He said his research program would now likely shift to encompass the effects of the break-up.

“It’s probably the most beautiful place on Earth,” he said of the remote Arctic location. “When you have a minute to just sit and look it’s pretty amazing.”