Some residents of the east end of Collingwood, the Ontario town famous for its cottages and ski hills, are carrying baseball bats, ski poles or sticks when they take their dogs for a walk. Others rely on whistles, air horns or flashlights when they go outdoors.

The reason? Concerns about coyotes attacking their pets.

And now, a resident is suing the municipality, alleging that officials have repeatedly ignored his complaints about the coyote population, which he says has locals living in fear.

The statement of claim by Jeff Brown, which was made public this week and seeks $680,000 in damages, is the latest twist in the challenging co-habitation between humans and urban coyotes.

From Edmonton to Montreal, reports of coyote sightings have increased. Four months ago, Montreal unveiled a coyote management plan. On Monday in Mississauga, Peel Regional Police said they are investigating the discovery of 11 traps that injured two coyotes. On Wednesday, Burlington, Ont., reminded residents that spring is denning season, increasing the potential for conflicts with coyotes.

Mr. Brown’s lawsuit details the frictions in Collingwood between authorities who say that culling coyotes would not make any difference, and residents who feel their bucolic lifestyle has been irremediably affected.

His court claim says he and others tried for months to get the town, the Ontario Ministry of Natural Resources and the local detachment of the Ontario Provincial Police to act. Mr. Brown says he can no longer enjoy the local trails or barbecue in his yard.

“I have nowhere else to turn ... I’ve exhausted all other options,” he said in an interview.

Mr. Brown, 60, has lived in Collingwood for four decades. He said the coyote issue began a year ago, with attacks on domestic animals in his neighbourhood.

He said town councillors heard from aggrieved residents at a public meeting last spring. A video of the meeting is posted online.

Brenda Stone told the meeting her dog needed 50 stitches after a coyote attack on her property.

Wayne Burley showed a photo of the family dog, Wally. His voice cracked as he described letting the pug out on the deck, hearing a bark, then not seeing him come back. Wally’s mangled remains were found in a swamp nearby.

Corrie Graham recalled seeing three coyotes outside her bedroom window devouring prey, leaving entrails and bones on her lawn. “It’s a very palpable fear that we’re living under ... it’s no longer my safe and happy place," she said.

Other residents mentioned concerns that young children would be harmed.

The town would not comment on the lawsuit. Its bylaw enforcement officer has said reports of coyote incidents increased to 198 between February, 2017, and March, 2018, but didn’t provide past numbers.

Assessing the coyote population can be tricky. Collingwood residents have been told that multiple reports can be a single animal sighted several times. On the other hand, Mr. Brown said, people will be less likely to report incidents if there is a perception the municipality would not act on them.

The City of Montreal pledged to take action after three young children were reported bitten by coyotes last summer. Proposals being considered include installing cameras and traps, and euthanizing aggressive coyotes. To get a better sense of the coyote population, the city plans to mark some with tags or GPS-equipped collars.

Collingwood’s coyote management plan presented last year states that “lethal removal” of coyotes is a last-resort that would offer only short-term relief.

That is similar to standard practices in other cities. Toronto’s policy, for example, is that a coyote biting a pet is not grounds for its removal – because it is considered normal coyote behaviour.

Mr. Brown said he could not accept his town’s refusal to cull coyotes within its limits when hunters legally shoot them just outside Collingwood.

“I don’t understand what the big fuss is.” 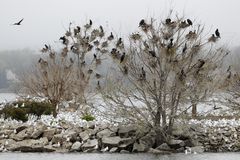