The long-running saga over the fate of the only nursing home in Canada exclusively dedicated to serving the Korean community is poised for a happy ending.

A Korean community group has agreed to purchase the Rose of Sharon Korean Long Term Care home in Toronto from a for-profit, chain operator. The agreement, unveiled this week, overrides a decision by the home’s court-appointed receiver to award it to Rykka Care Centres LP, a company with no ties to the Korean community.

Amid a growing chorus of community members and advocates for not-for-profit care who raised concerns that Rose of Sharon’s focus on Korean food, language and culture would be lost under new owners, Rykka abandoned its plans to take over the home.

“We’re absolutely thrilled that we’re going to get control of this asset back into our community,” said Tong Hahn, a board member of the Arirang Age-Friendly Community Centre who was involved in the talks with Rykka.

Arirang, a not-for-profit organization that develops health programs and services for Korean seniors, initially offered to purchase the nursing home for $6.5-million in 2019, but was outbid by Rykka, which offered $7.1-million.

Deloitte Restructuring Inc., Rose of Sharon’s receiver, says in court documents that Rykka won the competitive bidding process because its partner, Responsive Management Inc., has “significant” experience in the long-term care sector. The purchase was subject to the Ontario Ministry of Long-Term Care transferring the home’s operating licence to Rykka.

A spokeswoman for Responsive said in an e-mail to The Globe and Mail that the company was committed to expanding the 60-bed home to better serve the Korean community. “It became clear, however, that without the support of the community, we would not be able to facilitate a meaningful expansion,” Nicola Major said. “Therefore, we made the decision to work with Arirang to assign our purchase to them.”

It was the coronavirus pandemic that galvanized the Korean community to mobilize opposition to the transfer. Rose of Sharon has kept the virus at bay, with not a single case of COVID-19 among anyone who lives or works in the home.

Three of the 11 homes Rykka owns, by contrast, were hit hard by the virus in the spring. The federal government deployed the Canadian Armed Forces to two of its Toronto homes – Hawthorne Place Care Centre and Eatonville Care Centre – where 93 residents died of COVID-19.

At Anson Place Care Centre in Hagersville, Ont., 23 of the 61 long-term care residents succumbed to the virus.

Sandra Kang, whose 104-year-old grandfather lives at Rose of Sharon, started an online petition last November, calling on the Long-Term Care Ministry to block the transfer of the home’s licence to Rykka. More than 28,000 people have signed it.

Her grandfather, Jong Kil Kim, moved to the home two years ago, when his Alzheimer’s disease and dementia made it difficult to look after himself and speak in English. The home’s cultural traditions, including Korean corn tea served at every meal, music from his East Asian country, and personal support workers who speak his mother tongue, are essential to his well-being, Ms. Kang said.

“I feel like a weight has been lifted,” she said in an interview.

Ross Ha’s 88-year old mother moved to Rose of Sharon two years ago after she fractured her hip and sustained head injuries in a fall. Yon Ha is no longer able to dress or bathe herself and needs help getting in and out of bed, but is comfortable at the home and has regained some of the weight she lost after her fall, Mr. Ha said.

His mother rarely asks for help because she does not want to burden others, he added. But staff in the home are sensitive to this reluctance to speak out and are able to anticipate her needs. In a non-Korean environment, he said, his mother might just suffer in silence if she was thirsty. “So in that sense, I’m very grateful.”

The agreement between Arirang and Rykka is subject to approval by Deloitte and transfer of the operating licence. Mr. Hahn said Deloitte is receptive to the deal. The firm declined to comment.

Samir Sinha, the director of geriatrics at the University Health Network and Sinai Health System who advised Arirang on its initial bid, said the latest deal is a “sweet victory” for the community. “It’s one of the very few silver linings in the pandemic.” 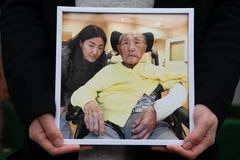