A conservative political advocacy group that was instrumental in taking down the Liberals in Ontario is going national, aiming to do to Justin Trudeau what it did to Kathleen Wynne.

But the arrival of Ontario Proud on the federal scene renews questions about when political advocacy crosses the line into collusion with a political party, enabling the party to raise and spend more money than legally allowed and, in the process, undoing decades of effort to neutralize the influence of big money on Canadian elections.

In a “victory update” to supporters in June, Ballingall boasted that Ontario Proud’s Facebook content was viewed almost 67 million times — more interactions than the Facebook pages of the three main parties, their leaders, the unions and all other political advocacy groups “combined!”

The group ran “an aggressive voter contact campaign” to identify Progressive Conservative supporters and mobilize them to vote, by way of one million-plus text messages and 2.5 million phone calls. It hired “street teams” to hand out 15,000 brochures and mailed out 600 “unplug Wynne” lawn signs.

Ontario Proud “drove the narrative” of the campaign, Ballingall boasted in the update.

“We delivered on our goals: a defeat of the Kathleen Wynne-led Liberals and a ‘sunlight’ campaign that exposed the NDP’s extreme candidates and agenda, ultimately helping to deliver a majority government for the Progressive Conservatives.”

All as a registered third party — legal parlance for a political advocacy group — that bills itself as a non-partisan, not-for-profit, grassroots organization.

And it’s now gearing up to the do the same for Andrew Scheer’s Conservatives in next fall’s federal election.

“Just like we did with Kathleen Wynne, Ontario Proud is building a war chest to take down Justin Trudeau,” the group announced in a recent fundraising email.

The Liberal party is bracing for the onslaught, warning in its own fundraising plea last week that Ontario Proud, “founded and directed by alumni of Stephen Harper’s government,” will use tactics known for “lowering the bar for political discourse.”

Ballingall says Ontario Proud’s precise plans for the Trudeau takedown will depend on the rules for third parties, which are in flux at the moment.

Currently under the Canada Elections Act, third parties that spend more than $500 during a federal election must register with Elections Canada. They can spend just over $200,000 on advertising during a campaign but as much as they want before its official start. Whereas political parties are banned from accepting donations from corporations or unions and face a strict $1,575-cap on individual donations, third parties face no restrictions on donors or the size of their contributions.

The act expressly forbids colluding with political parties to circumvent the spending limits imposed on parties in a bid to level the monetary playing field.

Despite that, in the run-up to the 2015 election, concern mounted that third parties in Canada were morphing into the kind of big-money political action committees that front for political parties in the U.S., rendering spending limits there virtually meaningless.

The fear was stoked by the emergence of Engage Canada, a group founded by one-time Liberal and NDP strategists who aimed to make Harper’s Conservatives “unelectable.” In turn, former Conservative advisers created HarperPAC to support the Tories, a short-lived group that shut down after the Conservative campaign team objected.

Concerns were also raised about Canadian environmental advocacy groups using foreign money — primarily from the U.S. — to influence the outcome of the election.

In response, the Trudeau government has taken steps to rein in third parties in Bill C-76, omnibus legislation that the government intends to have in place in time for next fall’s election.

It would increase the spending limits for third parties but broaden the scope of expenses to cover all their political activities, not just advertising, and apply the limits to the months immediately prior to the election call.

It would also spell out that collusion includes sharing of any information between a third party and a political party.

But there have been few instances in which third parties have been caught colluding in the past and C-76 is unlikely to change that in future.

“Mere circumstances or coincidences are not sufficient. You have to establish there was at least a tacit agreement between the two parties to achieve a common goal.”

In one of the rare instances where proof was established, Fair Vote Canada, a group that promotes proportional representation, and an NDP campaign manager were found to have colluded in a 2017 byelection in Ottawa-Vanier.

According to compliance agreements struck with the commissioner of elections last May, the two admitted to working together to produce a brochure that denounced Trudeau for reneging on his promise of electoral reform and urged electors to vote for either the NDP or Green candidates. The campaign manager also advised Fair Vote Canada on where to distribute the pamphlet for maximum impact.

For their part, both Ontario Proud and the Conservative party deny they are working in concert.

“We don’t take orders from anyone,” Ballingall said in an interview.

He insisted Ontario Proud, which has sister organizations in British Columbia and Alberta, is pro-Conservative only to the extent that it is “the lesser of evils.”

“Obviously, we have our own proclivity for smaller government, more responsible government, for stronger national defence,” he said.

“So obviously that aligns more with the Conservatives but it’s not like we’re rah-rah pro-Conservative; we’re just mostly (saying), ’We need to stop Justin Trudeau because he’s bad for Canada.“’

Although former Conservative MP Maxime Bernier’s upstart People’s Party of Canada might also be viewed as a natural ally, Ballingall ruled out supporting that option, calling Bernier “more or less a joke.”

Mayrand believes the elections commissioner might be “much better equipped to detect incidents of collusion” in future thanks to new powers conferred in C-76 to compel testimony and demand the production of documents.

Still, given the way third parties have been evolving, he thinks limits may eventually have to be imposed on who can donate and how much they can give to third parties — as is done for political parties.

“Otherwise,” Mayrand said, “it’s a run around the Elections Act.” 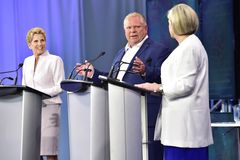