Linda O’Leary, wife of celebrity businessman Kevin O’Leary, would not face jail time, but only a fine if she is convicted in connection with a fatal boat crash last summer in Ontario cottage country, federal prosecutors say, confirming that their original assessment of the maximum penalty was not accurate.

Ms. O’Leary was charged last month with careless operation of a vessel under the Canada Shipping Act after an Aug. 24 collision on Lake Joseph in Muskoka left two people dead.

At the time, a spokeswoman for the Ontario Provincial Police, which conducted the investigation, said Ms. O’Leary could be liable for a fine of $1-million and up to 18 months in prison if she was convicted.

However, Ms. O’Leary’s defence lawyer, Brian Greenspan, pointed out that the penalty was only a fine of up to $10,000. His office said federal regulations on small vessels outlined in the official Canada Gazette issue of April, 2009, put the maximum penalty at $10,000 in cases dealing with pleasure craft.

When asked about the discrepancy at the time, the Public Prosecution Service of Canada declined to comment and referred The Globe and Mail to a section of the Canada Shipping Act that indicated a maximum 18-month jail term.

On Thursday, the prosecution service confirmed that it was wrong and Mr. Greenspan was right.

“The PPSC has reconsidered the position on maximum penalty in light of the Canada Shipping Act and its regulations and are of the opinion that the maximum applicable penalty for a pleasure craft’s contravention of [Section] 1007 of the Small Vessel Regulations is $10,000,” Nathalie Houle, a spokeswoman for the prosecution service, said in a statement.

“After careful review of the act, the Crown determined that the PPSC’s initial position on maximum allowable penalties was not accurate.”

Mr. Greenspan said on Friday that he has always maintained that the public prosecution service misread the statute and “they just have acknowledged that they were wrong.”

“It’s unfortunate that it took them a month to reverse the decision,” he said.

Mr. Greenspan said he doesn’t think the change will impact the trial, but it has affected his client.

“What it has had is an unnecessary period of public scrutiny on her that was unfair to her,” he said. “It’s caused unnecessary stress and hardship in that sense.”

Ms. O’Leary’s spouse is an entrepreneur, media personality and former candidate for the leadership of the federal Conservatives. The couple owns a cottage in Muskoka.

The O’Learys and another person were on their boat when it collided with another vessel. The crash killed Gary Poltash, 64, of Florida, and Suzana Brito, a 48-year-old mother of three from Uxbridge, Ont.

The driver of the other vessel, Richard Ruh, 57, of Orchard Park, N.Y., was charged under the shipping act with failing to exhibit navigation lights. 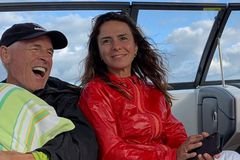 Follow Tu Thanh Ha and Laura Stone on Twitter @TuThanhHa @l_stone
Report an error Editorial code of conduct
Due to technical reasons, we have temporarily removed commenting from our articles. We hope to have this fixed soon. Thank you for your patience. If you are looking to give feedback on our new site, please send it along to feedback@globeandmail.com. If you want to write a letter to the editor, please forward to letters@globeandmail.com.
Comments are closed