A young hockey player thought to be dead is in fact alive, and his teammate, initially thought to have survived the Humboldt Broncos’ bus crash, has instead been declared dead – a mix-up the Saskatchewan coroners office is attributing to the extraordinary circumstances of the collision that killed 15 and injured 14 others.

The coroners office said on Monday that it will review its identification process after the mistake, but noted that the initial determinations were made with the participation of the families.

The province’s coroner had identified Xavier Labelle, 18, as one of the deceased in a news release issued on Sunday afternoon. On Monday morning, it issued a correction stating Mr. Labelle was alive, but that 18-year-old Parker Tobin – previously believed to be alive – was, in fact, dead.

The Tobin and Labelle families issued a joint statement on Monday saying they hope focus will remain on those grieving and recovering, and not the mix-up.

Each of their families had been reacting over the weekend to the incorrect information. Mr. Tobin’s mother had tweeted on Friday night that her son was in stable condition and being airlifted to a Saskatoon hospital, while Mr. Labelle’s brother, Isaac, eulogized him on Instagram on Saturday, posting several photos of the two together and writing that he will miss his brother.

Isaac Labelle said on Monday it was “a miracle” that his brother is alive, but declined to comment further out of respect for Mr. Tobin’s family.

Kayden Benson, who had been best friends with Mr. Tobin since they met at seven or eight years old when they rode the bus together and played street hockey after school, said he’s trying to focus on the good memories he has of his friend.

“He was a great kid all around, really smart, really good in school,” Mr. Benson said. “He had aspirations of going to college and getting a higher education there. He was a really great person, always wanted the best for everybody.”

“I can’t even articulate the words,” Ms. Kuhn said. “First, how could that have happened? Secondly, who found out the difference of this?”

Drew Wilby, a spokesman for the Ministry of Justice, apologized to the families for the mistake, which came to light late on Sunday.

Mr. Wilby said the process to identify the victims began with a list of names of people believed to be the survivors and the deceased, followed by verification from the coroner, families and community resources. Trauma may have factored into the mix-up, he said, adding that the boys were the same age, with similar builds and similar hair, recently dyed blond for the playoffs.

Both Mr. Tobin and Mr. Labelle’s families were on-site in Saskatoon and “involved” in the identification process, Mr. Wilby said. He could not provide further details, citing privacy laws.

“Looking back on it, obviously dental records are that 100-per-cent assurance, so we’ll look at that as we go foward,” Mr. Wilby said. “We are confident in the process that we have, [but] the coroners office will look at that and make those determinations, if they feel that they need to, and change that process. This is unprecedented in Saskatchewan’s history.”

Fifteen people, including 10 players between the ages of 16 and 21, died when a semi-trailer crashed into the Broncos’ bus late on Friday afternoon. Another 14 were injured. As of noon on Monday, 12 people remained in hospital: four in critical condition, four serious and four stable, according to Saskatchewan’s health authority.

Police had previously stated the driver of the semi was not injured.

There were no updates on Monday on the cause of the crash.

“The scope and complexity of this investigation means it will take some time to determine the cause of the collision and circumstances surrounding it,” Saskatchewan RCMP said in a statement.

On Sunday, thousands of people attended a vigil to remember the victims at Elgar Petersen Arena in Humboldt. Others filled overflow viewing spaces such as a nearby schools and a local curling rink. 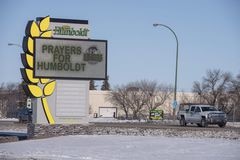 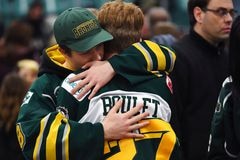 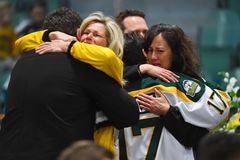