The Ontario coroner’s office says it will likely be several days before the victims of this week’s plane crash are publicly identified, but a friend of the pilot says the man and his entire family were among those killed.

A spokeswoman for the coroner’s office says in a statement that four adults and three children were killed when a small plane crashed into a wooded area in Kingston on Wednesday.

“The identities of the deceased persons will not be released to authorities until they have all been positively identified by scientific methods and next of kin have been notified,” issues manager Cheryl Mahyr said in a statement. “We anticipate this will take several days to complete.”

However, Austin, Tex., resident Ali Kodirov said the pilot was his friend Otabek Oblokulov, and the man’s wife and three children also died in the crash.

“I’m shocked and I still can’t believe this happened, it’s a big loss for us,” said Mr. Kodirov, who said he’s known Mr. Oblokulov since 2003, when he helped Mr. Kodirov settle in the United States after immigrating from Uzbekistan.

Mr. Kodirov said Mr. Oblokulov was a Houston resident and part of the Uzbek community in the Texan city.

“He was a really nice family guy and very helpful to the community in Houston.”

Dana Atkinson, president of Anson Aviation in Sugar Land, Tex., said Mr. Oblokulov trained at his aviation school and was known to many people in the local aviation community.

“He was very friendly, very outgoing and well-liked,” Mr. Atkinson said, adding that his company helped Mr. Oblokulov buy his plane, identified by investigators as a Piper PA-32, so he could travel with his family.

“We’re all sad any time something like this happens.”

Mr. Atkinson said his company helped connect Mr. Oblokulov with a third-party seller to purchase the plane and performed routine oil changes on it.

A GoFundMe page raising money for the Oblokulov family had raised more than $16,000 dollars by Friday afternoon.

The cause of Wednesday’s crash is still under investigation, but the Transportation Safety Board has said weather conditions were deteriorating at the time of the incident.

A spokesperson from nearby Canadian Forces Base said their search helicopter dealt with high winds while looking for the wreckage, while local residents said there was also heavy rain in the area at the time of the crash.

The TSB said the plane took off from the Toronto area and was headed for Quebec City, but early indications show the pilot had made plans to land in Kingston.

A statement on the board’s website said that prior to the crash, “There were communications between the pilot and Kingston Flight Service Station.”

Ken Webster, a TSB investigator heading up the probe, said the number of passengers will be another area of investigation. He said some models of the Piper PA-32 aircraft have only six seats, while others have seven.

“However, we found six seats at the accident site.... We do look closely at this kind of information,” Mr. Webster said.

A team of four TSB investigators have been assigned to the case. 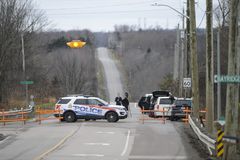