The Federal Court of Appeal has found that a pact between Ottawa and Washington to turn back asylum-seekers entering Canada from the United States does not violate the Charter of Rights and Freedoms.

A three-judge panel ruled unanimously Thursday to allow the Canadian government’s appeal that argued the Federal Court misinterpreted the law when it declared in July that the safe third country agreement breaches constitutional guarantees of life, liberty and security.

The Federal Court’s declaration of invalidity was suspended for six months and later extended, leaving the law in place for now.

Under the bilateral agreement, which took effect in 2004, Canada and the United States recognize each other as safe places to seek protection.

It means Canada can turn back people seeking asylum who arrive at land ports of entry along the Canada-U.S. border on the basis they must pursue their claims in the United States, the country where they first arrived.

Janet Dench, executive director of the Canadian Council for Refugees, said the court decision is disappointing.

“It really avoids wrestling with the experiences of people who have been sent back to the U.S.” she said.

“We submitted substantial evidence including affidavits from people who are in detention, from experts, from practitioners. So we know that there are widespread abuses, shocking conditions in detention in the U.S.”

She said the organizations and the individual claimants who argued against the agreement in court had framed their arguments as a challenge to the designation of the United States as a safe third country for refugees.

The court said the arguments should have focused on the review process Canada uses to determine whether the United States continues to be a safe country for refugees or not.

“We didn’t do (that) in part because the evidence of the review process is confidential,” Dench said.

The government claims privilege for that review process because its recommendations and decisions involve cabinet deliberations, she said, adding it would be hard to bring evidence when Ottawa refuses to share it with the public or release it to the court.

“It’s a little bit ironic that the court is saying that we should have taken this route, which would be very difficult to succeed with.”

Dench said the current government has described itself as a feminist government, and yet it has sent women back to the United States, even when they’re making a refugee claim based on gender-based persecution.

The federal government responded to the ruling Thursday night with a statement saying the agreement has served Canada well for 16 years and remains in effect.

“For the last three years, Canada has welcomed more refugees than any other country in the world and continues to provide protection to those fleeing conflict and persecution,” Immigration Minister Marco Mendicino and Public Safety Minister Bill Blair said in a joint release.

“Canada remains firmly committed to upholding a fair and compassionate refugee protection system and the STCA remains a comprehensive means for the compassionate, fair, and orderly handling of asylum claims at the Canada-U.S. land border.”

The Trudeau government has defended the safe third country agreement, saying there will be upheaval at the border without it.

In a submission to the court, federal lawyers said the absence of the agreement would serve as “a pull factor” attracting people to make a claim for protection in Canada.

“This will impact all types of port of entry operations and result in significant delays for persons making refugee claims at the land port of entry,” the government submission states.

Justin Mohammed, the human rights law and policy campaigner at Amnesty International Canada, said there was an extensive factual record before the court that showed people who were returned to the United States were subjected to human rights violations.

“One of the claimants who was involved in this case was returned to the United States where she was detained. She was held in solitary confinement in a freezing cold cell, and she was given food that was inconsistent with her religious beliefs,” Mohammed said.

He said there’s also an increased risk that a person who is returned to the United States might be sent back to their country of origin where they would possibly face persecution.

The court’s technical approach to the arguments is “unfortunate and regrettable,” he said.

Mohammed said Canada becomes complicit in the violations when it has the opportunity hear people’s claims for protection, but rather sends them back to the United States.

Both the Canadian Council for Refugees and Amnesty International say they will be considering the option to seek leave to appeal to the Supreme Court.

But he called on Parliament to make a decision to end this agreement.

“Regardless of this decision, it still remains within the hands of the Parliament of Canada to change this very shameful practice,” he said. 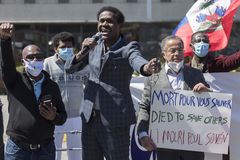