Suddenly, Canada has a foothold in one of the world’s fastest-growing and most pivotal clean-technology sectors.

Only days ago, being a player any time soon in making electric vehicles seemed preposterous. Ontario’s manufacturing heartland, despite its proud automaking history, had been passed over for new investments in the cars expected to take over global fleets. There wasn’t much confidence among industry-watchers that the junior partner in a continental market, next to an increasingly protectionist United States, could easily change that.

Then came this week’s announcement that Ford Motor Co. will make a roughly $2-billion investment in converting its Ontario facilities to make EVs, mostly by retooling its Oakville, Ont., plant for five new lines of them.

Now, recent claims by Justin Trudeau’s government that Canada could build competitive advantage in making the vehicles of the future sounds a bit more plausible. Maybe this country really could pair its automaking expertise with its reserves of minerals needed for EVs, as Wednesday’s Speech from the Throne suggested, for a uniquely attractive supply chain.

But if it is to make that a reality, Ottawa still needs to work alongside provincial governments, industry and organized labour to come up with a strategy. And while this week’s good news pointed toward some of that strategy’s components, it shouldn’t obscure the need to further step up their game, and the contentious decisions ahead.

In an interview after he triumphantly announced the fruits of labour negotiations with Ford that he led, Unifor president Jerry Dias suggested this was “the first time” that the federal and Ontario governments had really worked together to try to entice EV investment. And he said that the rapid returns were as much a product of circumstance as policy design.

Because the talks were about what Ford will make after 2024, when its commitment to assembling vehicles with internal combustion engines (ICE) in Oakville ends, there will be five years for Canada to adapt its infrastructure accordingly. Mr. Dias said that was different from the 2018 situation in which General Motors gave up on its Oshawa plant, rather than committing to building EVs, when ICE lines there were imminently ending. It also helped, he said, that the main competition for building these new Ford EV lines was from Mexico rather than the U.S., and that as the top seller of vehicles in Canada, Ford was reluctant to abandon production here.

Mr. Dias and others do point to ways that governments helped make this happen, and that could lead to future wins as well.

One of them, highlighted by Automotive Parts Manufacturers Association president Flavio Volpe, is the renegotiated version of the North American free-trade agreement. The United States-Mexico-Canada Agreement includes domestic parts requirements and labour provisions that, per Mr. Volpe, “have biased the U.S. Midwest and Great Lakes over everywhere else,” including Mexico and the U.S. South.

More obvious and likely more controversial is that Ottawa and Queen’s Park combined to offer Ford around $500-million in subsidization. (Neither the automaker nor governments are commenting on the agreement’s specifics until it is ratified by Unifor’s membership.) That’s a greater share of costs than governments here usually provide automakers. But it’s more in line with, and possibly still below, what the U.S. and other countries tend to offer.

That points to one of the many strategic considerations that Canadian governments need to reckon with, going forward.

It’s not only a question of how much they’re willing to pony up to automakers in the crunch time of negotiations. Around the world, countries racing to put down roots for EV sectors are pro-actively wooing manufacturers with funds for both vehicle assembly and battery-making specifically. Canada still needs to figure out how deep it wants to get into that game, and where the best bang for buck would be.

Meanwhile, there is much debate around the importance of increasing domestic demand for EVs. Although the bulk of vehicles made in Canada are exported, environmental groups argue that aggressive measures, such as mandates requiring a certain share of vehicles sold here have zero emissions, are a necessary signal to attract investment. But to date the federal government has been sympathetic to the domestic auto sector’s counterargument that such policies would do more industrial harm than good, since none of its products yet fit the bill.

Then there’s the other side of the aspirational supply chain, involving natural resources needed for EV batteries such as cobalt, lithium and nickel – another crowded field into which Canada is a little late.

Sarah Petrevan, policy director for the think tank Clean Energy Canada, suggests that Canada could sell itself on ethical and sustainable mining practices, which is a concern for some makers of vehicles supposed to represent social responsibility. To get to that point would likely require an expansive public-policy tool kit – R&D, de-risking of capital, infrastructure in remote areas – that governments have yet to formulate.

The Ford announcement could one day stand as the moment that kicked all these discussions into high gear.

One of the Detroit Three making EVs in Canada will be impetus to develop other parts of the supply chain, which could lure other EV-making giants, and so on.

But that will depend on governments recognizing what happened this week as a starting point for the work they need to do, not interpreting it as evidence that they’ve already done what is needed. 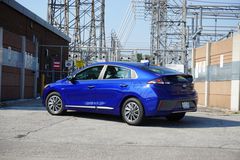