Quebec announced Tuesday it would offer people in long-term care homes and seniors residences a third dose of COVID-19 vaccine in a move to prevent outbreaks in the facilities that bore the brunt of the pandemic’s first wave.

The extra dose, which will also be offered to residents of other congregate care settings, is intended to protect people with waning immunity amid a rise in the number of COVID-19 outbreaks in those facilities, Health Minister Christian Dubé said in Quebec City. He said about 220,000 people live in centres where the booster shots will be available.

“We have about 150 active cases among these people, so it’s very few,” Dubé said. “The measure is much more preventive than corrective.” At the beginning of the month, there were around 10 cases of COVID-19 in those facilities, he added.

Dube said public health officials are recommending that third doses be administered around six months after the second, adding that the province plans to give the booster shots along with seasonal flu vaccinations, which begin in late October.

Quebec, which already offers a third dose of COVID-19 vaccine to people who are severely immunocompromised, is not yet planning to make a third dose of vaccine available to older age groups living at home, he said.

Public health director Dr. Horacio Arruda said that older people who live at home tend to be in better health and have fewer contacts than those who live in long-term care.

Quebec’s initial decision to wait 16 weeks between first and second doses of COVID-19 vaccine has also given people a higher level of protection than those in Israel and the United States, where the interval was much shorter, Arruda said.

Dr. Sophie Zhang, who oversees 15 long-term care centres in Montreal, said that a rise in the number of COVID-19 cases in congregate care facilities is to be expected given the increased circulation of the disease in Quebec.

“We know that community transmission is the number one predictor of when we are going to start getting cases in facilities,” she said in an interview. The fact that the number of cases remains relatively small is a sign that vaccination, as well testing and isolation protocols, is working, she added.

Zhang said that while she’s not opposed to giving long-term care residents a third dose, other factors need to be considered, including the shortage of vaccines in other parts of the world.

“We can’t just protect our own and not look at the situation elsewhere,” she said.

Arruda said global vaccine supplies are one of the factors Quebec is considering. He said the province is offering third doses to the most vulnerable because it will save lives, adding that there would have to be a “damn good reason” to offer third doses to all Quebeckers at a time when there’s a global shortage.

Ontario, Saskatchewan and Alberta have made third doses available to people in congregate care settings, while Manitoba is offering third doses to residents of long-term care facilities in First Nations communities.

Dr. Donald Vinh, an infectious disease specialist at the McGill University Health Centre, said he thinks giving people in long-term care a third does makes sense given the data from other countries that has shown waning immunity after six months.

Vinh said that while it makes sense to prioritize people in long-term care because they are more vulnerable, other seniors may also need boosters in the future. He said he’s also worried about the eight per cent of Quebec residents over sixty who haven’t received their first shot.

“A third-dose booster for those who are fully vaccinated is one measure that we need to do to protect our elderly, but we really need to make sure we get the first two doses to the remaining eight per cent ASAP, because those are the ones who are getting sick now, getting hospitalized,” he said.

Earlier in the day, Quebec reported 469 new cases of COVID-19, the lowest number of new daily cases since August, and six deaths linked to the novel coronavirus.

The Health Department said the number of hospitalizations rose by 22, to 321, and 94 people were in intensive care, down one from the day before.

The province’s public health institute said 89.3 per cent of Quebec residents 12 and over have received at least one dose of a COVID-19 vaccine and 85.2 per cent are considered adequately vaccinated. 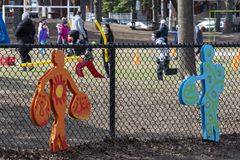 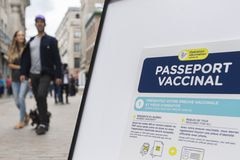 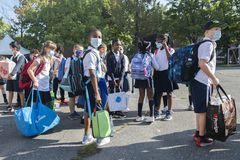