TORONTO
The Canadian Press
Published May 16, 2021 Updated May 16, 2021
Comments
Text Size
Please log in to listen to this story. Also available in French and Mandarin. Log In Create Free Account

Canadian provinces continued to take steps toward hitting their COVID-19 vaccination targets on Sunday even as questions linger after the departure of the senior military officer in charge of the national immunization drive.

Ontario administered its seven millionth vaccine dose over the weekend, which saw several hot spots trying to scale up their efforts to reach more residents.

One vaccine clinic in Peel region west of Toronto operated for at least 32 hours straight in a bid to reach essential workers logging non-traditional hours as well as younger people.

Ontario officials are set to expand vaccine eligibility to all residents 30 and older this week, though many younger adults have been able to secure shots in virus hot spots.

Quebec began opening walk-in clinics for those 18 and up a few days ago, and announced Sunday that it had surpassed the four million vaccine mark.

The provinces are expected to be able to further expand their vaccine rollouts this week thanks to large scheduled deliveries from key suppliers.

Pfizer and BioNTech had been scheduled to deliver around two million doses this week, but the federal government has said the two companies will ship an additional 1.4 million shots to Canada ahead of the upcoming holiday weekend.

Federal figures show Canada is expected to receive about 4.5 million total doses this week, including 1.1 million jabs from Moderna.

The provinces are pushing ahead amid questions about who will lead Canada’s vaccine rollout following the abrupt departure of Maj.-Gen. Dany Fortin, who left the post late last week pending the results of a military investigation.

The federal government has not said why Fortin was reassigned nor who will replace him, insisting his departure will not hamper the vaccination campaign.

Canada’s chief public health officer has suggested the country could begin easing health restrictions to allow small outdoor gatherings once 75 per cent of adults receive at least one shot and 20 per cent are fully vaccinated.

On Sunday, Dr. Theresa Tam once again urged patience to get vaccinated, saying disease levels in Canada were still too high to allow a return to normal.

“Until vaccine coverage is sufficiently high to impact disease transmission more broadly in the community, we must maintain a high degree of caution with public health and individual measures and not ease restrictions too soon or too quickly where infection rates are high,” she wrote in a statement.

While some provinces have seen a slow decline in cases, others are still in the midst of a punishing third wave.

Ontario is reporting 2,199 new COVID-19 cases today. The province also says 30 more people have died from the virus. The data is based on 33,142 tests administered over the past 24 hours.

There were 1,292 COVID-19 patients in Ontario hospitals as of this morning, a decline of 254 from the day before. The province says 714 of those patients were in intensive care and 509 were on ventilators.

The province’s vaccination drive also appeared to be shifting into a higher gear, with Health Minister Christine Elliott saying more than 139,000 shots were administered on Saturday alone for a total of more than seven million since the immunization effort got under way.

Meanwhile, Premier Doug Ford says summer camps will be allowed to reopen in the province this year.

The premier’s remarks came during a stop at a mass vaccination clinic west of Toronto. Ford offered no details on reopening plans, including whether they pertained to overnight or day camps and any public health measures that may be in place.

A spokesperson from the Premier’s office says more details will be announced before the province’s stay-at-home order lifts on June 2.

Hospitalizations and intensive care numbers each declined by one to 508 and 119, respectively.

The stable case numbers come as the province added 90,196 vaccine doses in the previous 24 hours and 2,234 from earlier to its grand total of 4,323,040 vaccines administered.

Health Minister Christian Dube highlighted the fact that the province has now administered more than 4 million shots, and thanked health workers and Quebecers in a Twitter message.

Currently, the government says 48.2 per cent of the province’s population has received at least one dose.

A police spokeswoman says it was firefighters who called the authorities at about midnight Friday night to report people gathering at a house in Sainte-Beatrix, about 100 kilometres north of Montreal.

Local and provincial police arrived to find people fleeing on foot or barricading themselves in the house, according to spokeswoman Audrey-Ann Bilodeau

A Calgary mayoral candidate who is under a restraining order and a pastor both face charges for allegedly violating COVID-19 laws over the weekend.

The Calgary Police Service alleges Kevin J. Johnston was in violation of a court order when he attended an illegal gathering Saturday morning.

The injunction, obtained by the province’s health delivery agency on May 6, mandates that event organizers comply with public health restrictions, including masking, physical distancing and attendance limits.

Police also say Pastor Tim Stephens was arrested Sunday afternoon for organizing a church service that was held earlier in the day at Fairview Baptist Church, which police allege did not comply with public health orders.

Police say they received repeated calls from concerned citizens about services at Fairview Baptist Church in recent weeks, and that Stephens was pro-actively served a copy of the May 6 order last weekend.

On Friday, Alberta Health Services said the Court of Queen’s Bench imposed a restraining order on Johnston, requiring that he stay at least 100 metres away from health officers and must not publish any threats or hate speech directed at them.

Johnston is running in this fall’s municipal election and has been a vocal supporter of anti-lockdown protests.

“We are at a critical point in our province’s response to the pandemic and citizens must comply with public health orders in order to ensure everyone’s safety and well-being,” police said in a news release announcing Johnston’s arrest.

They didn’t say what event he allegedly attended.

Alberta Health Services has said Johnston has been aggressive and threatening towards two particular health workers as well as to the general AHS work force.

Premier Jason Kenney tweeted Saturday that he was glad the restraining order was issued, calling Johnston a “nutbar.”

Police, meanwhile, said they did not enter Fairview Baptist Church during Sunday morning’s service, and that Stephens was arrested in the afternoon.

“The Pastor acknowledged the injunction, but chose to move forward with today’s service, ignoring requirements for social distancing, mask wearing and reduced capacity limits for attendees,” police stated in a news release.

Saskatchewan is reporting 167 new cases of COVID-19 and one additional virus-related death. The person who died was in the 80-plus age category, according to the province’s daily pandemic update, and was from the Saskatoon zone.

People are unwittingly finding themselves the target of COVID-19 misinformation
May 16, 2021
Health officials lay out road map for what life could look like after most Canadians receive COVID-19 vaccines
May 14, 2021 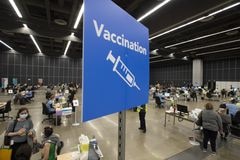