Canada’s third wave of COVID-19 is escalating at an alarming rate, driven by variants that are sending more middle-aged people to hospital, just as the country’s immunization experts recommend against giving the AstraZeneca vaccine to anyone under the age of 55.

Cases are increasing at such a fast clip in British Columbia that the government has imposed the strictest restrictions since the beginning of the pandemic. In Ontario, a new report shows variant infections are sending more people in their 40s and 50s to intensive-care units than earlier incarnations of the coronavirus.

“The third wave is really different, especially from the first wave,” said Katharina Plenk, chief and medical director of the department of medicine at Cortellucci Vaughan Hospital, a facility north of Toronto designated for COVID-19 patients. “Definitely there is a signal there that this is affecting a younger population. This is obviously something that hits close to home, and it’s been very scary to see.” 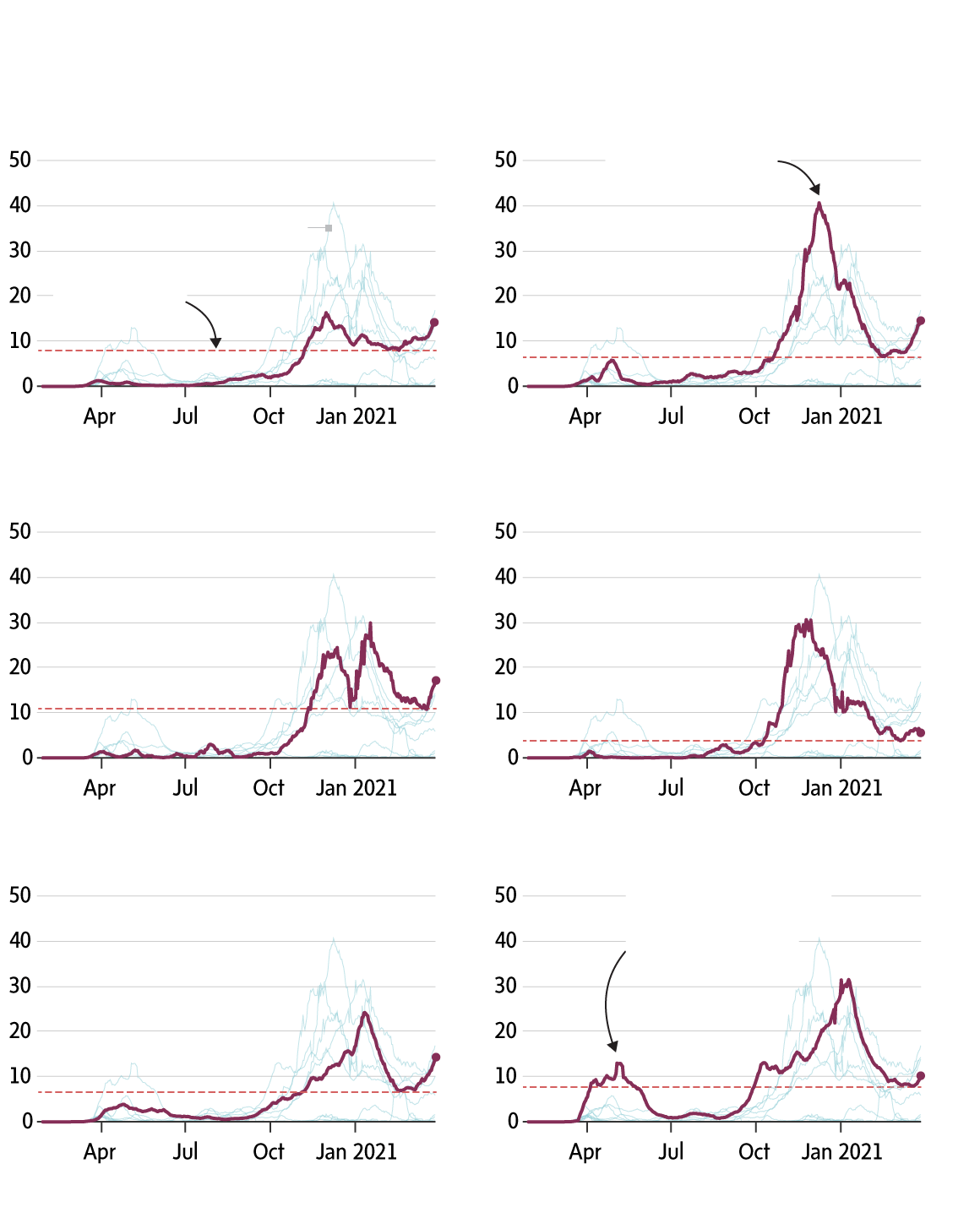 The age profile of people with severe COVID-19 is also shifting because of vaccines, which have contributed to a steep drop in infections and deaths among residents of nursing and retirement homes, the chief victims of previous waves.

But Canada’s vaccination efforts were dealt a fresh blow on Monday. The expert group that advises the country on immunization policy called for a pause in injections of the AstraZeneca shot to anyone under 55 – one day before Canada was scheduled to receive 1.5 million doses of the vaccine from the United States.

The National Advisory Committee on Immunization issued the new recommendation after rare cases of serious and unusual blood clots in European recipients, particularly women, under 55.

Although no such cases have been reported in Canada, Shelley Deeks, the vice-chair of NACI, said it made sense to stop giving the shot to younger people as a “precautionary measure,” while Health Canada investigates.

Health Canada itself has approved AstraZeneca for all adults, but officials said Monday they would now require manufacturers to conduct a “detailed assessment” of the benefits and risks by age and sex.

Provincial leaders said they would follow NACI’s guidance and direct their AstraZeneca doses to people 55 and older, but experts predicted the fog of uncertainty that has engulfed the AstraZeneca vaccine for weeks was bound to hurt uptake.

Lisa Richardson, a physician with Toronto’s University Health Network who works on vaccine hesitancy, said she agreed with the advisory committee’s recommendation. But, Dr. Richardson said, the real challenge will now be figuring out how to communicate why the decision makes scientific sense and why the vaccine still remains a good choice for those who are 55 and over.

“To have to backtrack and explain this … it is going to be a setback for this vaccine, which we know is an effective one,” she added.

Most European countries that suspended using the AstraZeneca vaccine resumed administering the shot after the European Medicines Agency concluded on March 18 that the vaccine was safe. However, agency officials said they could not rule out a connection between the vaccine and a rare clotting disorder.

In recent days, a German-led research team found the disorder is comparable to one that is known to sometimes occur in reaction to the blood thinner heparin. In that case, heparin occasionally binds with a protein that is normally associated with blood platelets, the body’s natural clotting agents. The unusual combination alerts the immune system to produce antibodies that eventually end up triggering the platelets to form clots.

The vaccine-associated cases seen in Europe exhibit a similar syndrome, which the team in a study has dubbed vaccine-induced prothrombotic immune thrombocytopenia, or VIPIT. Similar antibodies were found in four out of four cases for which the team had blood samples.

The team’s results are documented in a study that has been posted online but is still undergoing peer review.

“I’m confident that this is the explanation for these unusual cases,” said Ted Warkentin, a professor of pathology and molecular medicine at McMaster University who was a co-author on the study.

The disorder is extremely rare and can be tested for and treated if patients report problems after vaccination. Dr. Warkentin said a lab at McMaster is now prepared to do the necessary testing should any cases arise in Canada.

Some countries said the vaccine would be used only for older citizens since the risk of not being vaccinated grows steeply with age. But countries have varied on their cutoff age. France settled on 55, while Sweden and Finland are only giving the vaccine to people older than 65 and Iceland to those 70 and up. 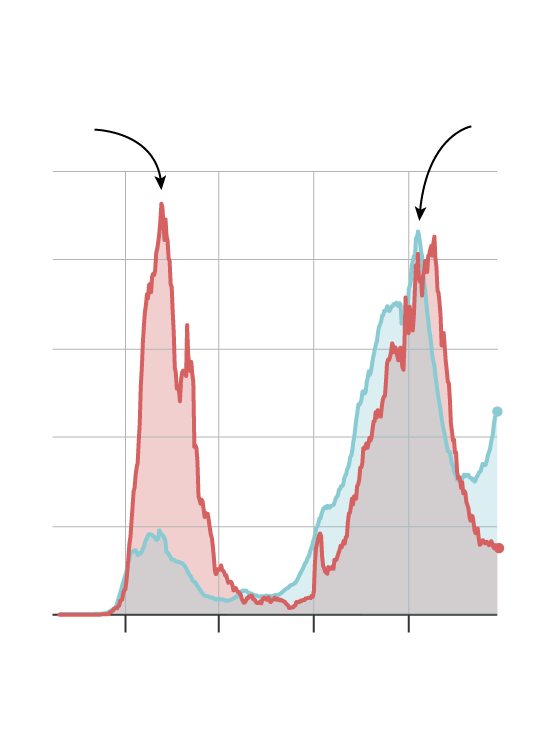 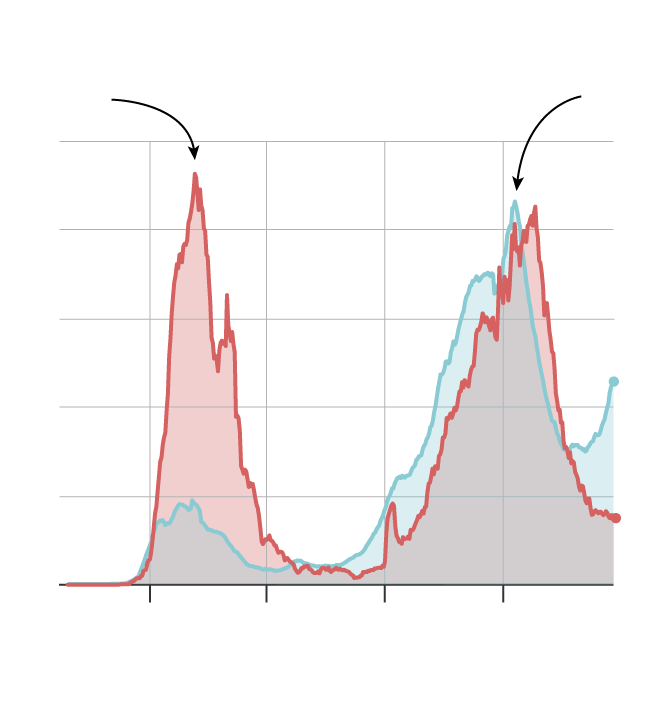 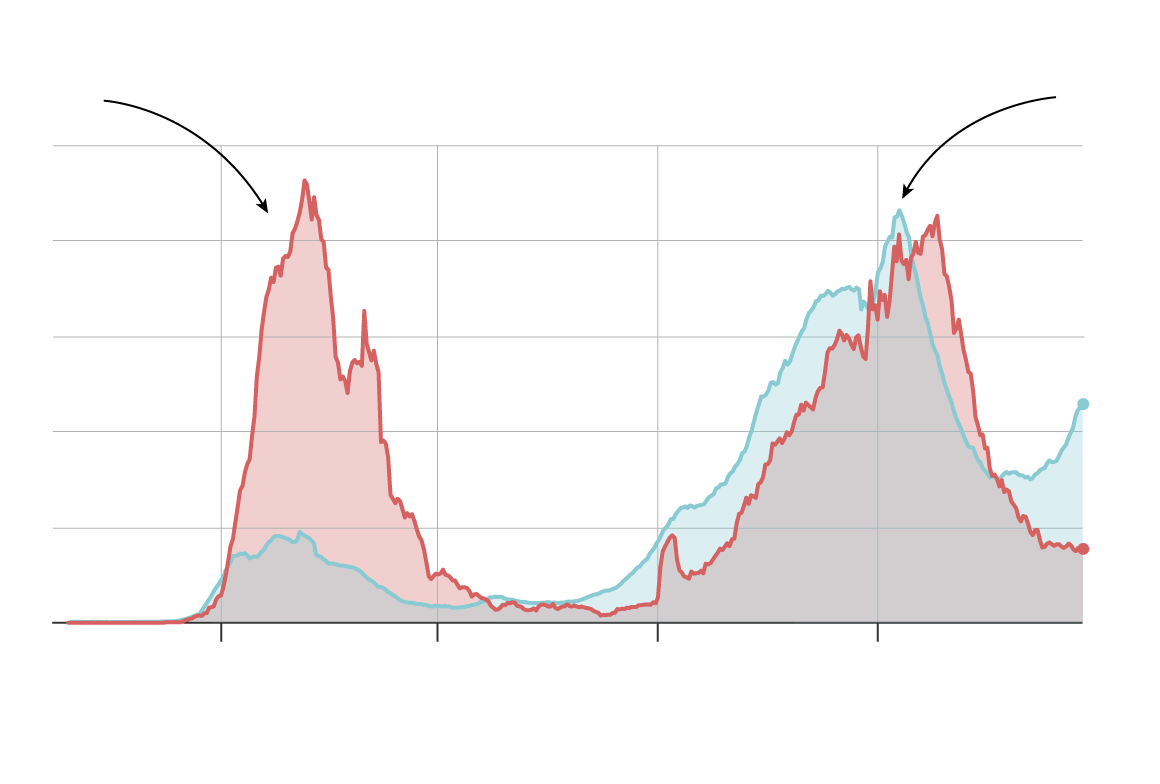 Meanwhile, Canada is now reporting more than 4,000 new cases of COVID-19 a day, on average, up from about 2,500 in early March, according to the Public Health Agency of Canada. Deaths have dropped to an average of 29 a day, down significantly from a second-wave high that topped an average of 160 a day in late January.

When it comes to infections, the Canada’s reversal of fortunes is being driven by faster-spreading variants of the coronavirus, particularly the B.1.1.7 variant first identified in Britain.

B.C. recorded 2,518 new COVID-19 cases from Friday to Sunday – about the same as in the first two months of the pandemic.

The surge prompted the government to impose a provincewide “circuit-breaker.” For three weeks beginning Tuesday, dine-in service at bars and restaurants, all indoor adult group fitness activities, and worship services – which were just permitted to reopen on a limited basis – are all prohibited.

The Whistler Blackcomb ski resort is also required to close over the same period to address transmission within the community.

“That is also a concern because we know this variant is not only more transmissible but has been shown in some parts of the world to be less amenable to the vaccine,” Dr. Henry said.

In Ontario, cases that have screened positive for a variant of concern now make up an estimated 67 per cent of all cases, according to the province’s COVID-19 Science Advisory Table.

Science table members have also found B.1.1.7 to be more dangerous, reinforcing research from Britain and Denmark on the lethality of the new variants.

In a new brief published Monday, the group concluded that, compared with early versions of the coronavirus, the variants of concern increase the risk of hospital admission, ICU admission and death by 63 per cent, 103 per cent and 56 per cent, respectively.

Ontario’s daily case counts are as high now as they were when Premier Doug Ford’s government ordered a provincewide lockdown on Boxing Day. More COVID-19 patients are in hospitals and ICUs now than they were then. But the percentage of coronavirus patients in ICUs who are younger than 60 is about 50 per cent higher than it was around Christmas.

Dr. Plenk of Cortellucci Vaughan sees evidence of that in her hospital. On Monday afternoon, one-third of the 30 coronavirus patients in its ICU were younger than 60. Two were in their 40s, and one in his or her 30s, Dr. Plenk said.

“We have a lot of patients who are factory workers or essential workers and their whole family is sick,” she added. “Before, the household infectivity rate was 30 per cent. Now, if one person has it, the whole family has it.”

Peter Juni, scientific director of Ontario’s COVID-19 Science Advisory Table, said the longer the Ontario government waits to renew and strengthen its public-health measures, the more “painful” an eventual lockdown will be.

“Every day we delay we just increase the burden for the health care system and we ensure, with everyday that we wait, that the restrictions will need to be longer,” he said. “That’s the challenge here.”

The large number of COVID-19 infections in some places makes it more likely for new variants of the virus to emerge. Science Reporter Ivan Semeniuk explains how vaccines may not be as effective against these new strains, making it a race to control and track the spread of variants before they become a dangerous new outbreak.

New study casts doubt on time between COVID-19 vaccine doses
March 26, 2021
U.S. prepares to lend Canada 1.5 million doses of AstraZeneca COVID-19 vaccine
March 18, 2021
COVID-19’s collateral damage: What happens when Canadians with other illnesses miss out on medical care?
March 27, 2021
How we are racing COVID-19 variants in the battle to control the pandemic
Video
January 29, 2021