Canadian soldiers armed with chainsaws fanned out across the Halifax area on Monday to help clean up the tangled mess of fallen trees and power lines left behind by post-tropical storm Dorian.

Their high-profile deployment – carried out under bright sunshine – was part of a wider effort to deal with power outages that have left much of the Maritimes in the dark for two days.

Utility companies in Nova Scotia, New Brunswick and PEI are facing a massive task in restoring electricity to hundreds of thousands of customers.

In Nova Scotia, the province that sustained the most damage from Dorian’s hurricane-force winds, 147,000 homes and businesses were still without electricity late Monday afternoon – down from 400,000 on Sunday morning.

On Monday morning, three of the Canadian Army’s light-armoured vehicles were dispatched to a neighbourhood on the east side of Halifax harbour, where Lieutenant Gabriel Picard was tasked with removing a large maple tree blocking a residential street.

“We are here to support the local authorities and to help things return to normal after the passage of hurricane Dorian,” said Lt. Picard, troop commander with 4 Engineer Support Regiment, based at Canadian Forces Base Gagetown in New Brunswick.

“Our main priority is to clear the roads and to make sure that people without power are safe.”

However, Lt. Picard and his squad couldn’t start cutting up the uprooted tree because its top branches were still tangled in utility wires on the far side of the street. Without an electrician to ensure the site was safe, the soldiers put away their chainsaws and left to take a break.

As their green armoured vehicles rumbled through Dartmouth, the soldiers were greeted with waves and shouts of encouragement from children on the sidewalk, enjoying a day off from school.

Dartmouth resident Sherri MacDonald said she and her neighbours were grateful for the army’s assistance.

“When I drove up here a few minutes ago, it was a little shocking,” she said. “But I’m also really thankful that we have all of these folks out cleaning up our city and helping us get things back to normal.”

Ms. MacDonald said the storm temporarily cut power to her home on Richards Drive, but her property was not damaged.

“I do know that it wreaked havoc all over the city,” she said. “People can’t get to work. The power is out. Lines are down. Trees are blocking the way. I know that lots of folks had damage to their cars and their houses.”

About 300 soldiers from CFB Gagetown in central New Brunswick were brought in to help with the cleanup and another 400 “immediate reaction forces” were on standby.

On Sunday, Nova Scotia Power chief executive officer Karen Hutt said the privately owned utility was facing a “worst-case scenario” after Dorian roared over the middle of the province. The utility was receiving help from crews from Quebec, Ontario, New Brunswick, Florida and Maine.

Ms. Hutt said in an update that many larger outages affecting Cape Breton and the northeastern mainland would be fixed by Tuesday, but that many smaller ones would take longer.

Many schools across Nova Scotia and Prince Edward Island were closed Monday, and emergency officials have been urging people to stay home – both for their own safety and to give cleanup crews the room they need to work. Public schools in Nova Scotia were to remain closed on Tuesday.

In New Brunswick, more than 80,000 homes and businesses were without electricity at the peak of the storm on Saturday. NB Power spokesman Marc Belliveau said that number had been reduced to about 7,000 by Monday afternoon, and he expected most of those would be reconnected by Monday night.

“Due to the nature of the work, some customers may be without power until the end of the week,” the utility wrote on its Twitter feed.

In Quebec’s Îles-de-la-Madeleine, the destruction went far beyond property damage. Entire sections of coastal roads and cliffs were swept away by the wind and waves, accelerating a process of erosion that has threatened homes, tourist attractions and infrastructure in recent years.

Public Security Minister Geneviève Guilbault acknowledged that erosion has become a concern for the archipelago in the Gulf of St. Lawrence and said work was beginning immediately to protect the most vulnerable areas.

Meanwhile, many marinas around the Maritimes were left battered by Dorian’s storm surges.

Boat owners at the Shediac Bay Yacht Club in New Brunswick were assessing damage on Monday after strong winds and waves tossed boats around like toys.

“This is the worst we have ever seen,” said Gilles Brine, a member of the club’s executive. “There are three boats that are on the rocks from the marina side, and on the slip side, there are about 20 boats that are on top of each other.”

In Nova Scotia, one of the most dramatic scenes during Saturday’s storm was the collapse of a crane in downtown Halifax, which raised questions about the level of preparedness at the construction site.

Video shared on social media shows the crane collapsing into the side of an empty apartment building under construction by WM Fares Group. No one was injured, but the Nova Scotia Labour Department is conducting an investigation, and a stop work order has been issued.

“It was supposed to withstand the expected wind speed, and that didn’t happen,” Mr. Fares said in an interview, adding that engineers are trying to determine how to remove the twisted wreckage. He said that “taking the crane down and putting it back up is not a procedure you can do every time there is a wind storm.”

A news release from the fire department said it would be meeting with various agencies to figure out how to remove the crane.

One of Halifax’s largest employers, the Irving-owned Halifax Shipyard, cancelled its day shift because of unresolved power outages downtown. The municipality was asking residents to use public transit in the coming days to make room for cleanup crews on the streets.

“Residents can expect to see members of the military in numerous locations across the region as they assist municipal works staff,” the regional government said in a statement.

The province’s Emergency Management Office was asking people to stay off the roads, saying there have been instances of drive-thru lines impeding emergency vehicles.

Nova Scotia residents were also being warned to stay out of provincial and national parks, and to be careful when using generators.

The Canadian Red Cross says a fire sparked by a generator damaged a historic general store in Petite Riviére, which is along Nova Scotia’s southwestern shore. 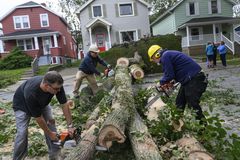 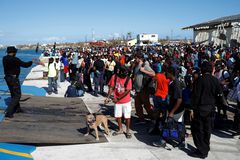