A man opened fire at Toronto’s Eaton Centre six years ago as a form of “street justice” in retaliation for being stabbed months before, a murder trial heard Monday.

Christopher Husbands, 29, is accused shooting at a group of young men at the mall’s food court on June 2, 2012 killing two of them and injuring six others caught in the crossfire and subsequent pandemonium.

Husbands has pleaded not guilty to the charges, which include two counts of second-degree murder, five counts of aggravated assault, one count each of criminal negligence causing bodily harm and reckless discharge of a firearm.

His lawyer, Stephanie DiGiuseppe, said Husbands will testify in his own defence where he’ll admit he was the shooter. But the defence will argue he is not criminally responsible for the crimes due to a mental disorder.

“This is about what happened inside Mr. Husband’s mind during that short period of time when shots were fired in the food court,” DiGiuseppe said in her opening remarks to the jury.

Crown lawyer Mary Humphrey told the jury that Husbands wanted retribution for being attacked in February.

Humphrey said Ahmed Hassan, 24, died on the floor of the food court while Nixon Nirmalendran, 22, died in hospital nine days later due to complications from a bullet wound.

Innocent bystanders hurt in the shooting included a 13-year-old boy who was shot in the head and survived, and a pregnant woman who was trampled in the ensuing stampede as shoppers ran for their lives, she said.

Humphrey said the Crown will show that Husbands and Nirmalendran used to be friends. Husbands, she said, confided in a girlfriend that Nirmalendran was among his attackers on Feb. 28, 2012.

DiGiuseppe said Husbands will testify that Nirmalendran and his younger brother were among the group of men who attacked him that night.

The judge told the jury that Husbands faced a previous trial, but did not say what the outcome was or why he was being retried.

Humphrey said the jury would see extensive video evidence of the shooting and hear how police tracked down Husbands.

She said video shows Husbands standing near a sushi restaurant while his girlfriend bought food. Then a group of five men walked by Husbands, who yelled out at them.

Husbands ran toward the group and pulled a gun from his satchel and fired 14 bullets into the crowd, she said. He was at the Eaton Centre with his girlfriend and bought a pair of Rollerblades and a jacket from Sport Chek.

Shortly after, they went to the recently renovated food court to eat, Humphrey said.

Around that time, Nirmalendran, Hassan and three other friends – all in their early 20s – had gone to the mall to get some food and to “talk to girls,” Humphrey said.

After the shooting, Humphrey said, video shows Husbands race up the escalators and leave the mall.

The gun has never been found.

“This was an intentional and voluntary act,” Humphrey said of the shooting.

DiGiuseppe said this is a complex case that will feature a variety of mental health experts who will discuss Husbands’ state of mind at the time.

She said he grew up with a mother who was addicted to crack and eventually moved from the United States to Toronto to be with his father.

Husbands grew up in Regent Park and watched a man be executed at the age of 13, DiGiuseppe said.

She said the stabbing in February had a profound effect on Husbands’ mental health, saying experts will testify that he suffered from post-traumatic stress disorder, paranoia and depression, and had nightmares and flashbacks.

Husbands will testify that while at the Eaton Centre, he saw the men who attacked him and believed he heard one of them say to another to shoot him.

“Following this Christopher Husbands will describe feeling disconnected from his own body he felt his arm move up, but did not feel as if he was in control of his arm,” DiGiuseppe said.

“He experienced auditory and visual hallucinations. He has no memory of the events that followed inside the food court.” 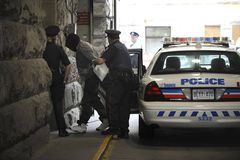 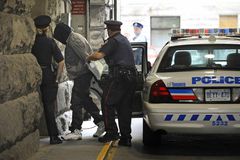 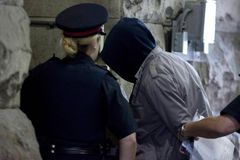