Heck, no, Donna Hunt-McDougall isn’t going to tell you her age.

“How old do you think I am?” she says, twirling in her sneakers before a group of well-spaced onlookers on her Toronto street.

“I’m a senior citizen, that’s all I’ll say,” she announces before toggling her phone to Wynonna Judd’s rendition of Burning Love and cranking the portable Bose speaker she bought some weeks ago so that the entire street could participate in her daily line-dancing classes.

The COVID-19 restrictions have turned many of us into sedentary slugs. In some parts of the country, trips to parks, sports fields and other recreation sites can yield hefty fines and social ignominy. Seniors have it particularly tough, with those older than 70 being advised to stay indoors, cutting them off from the psychosocial incentives that come with group exercise.

But Ms. Hunt-McDougall and other Canadians are getting creative.

Ms. Hunt-McDougall launched her class a few days after recreation centres closed down last month, barring her from teaching her once-a-week line-dancing class at the local YMCA. She figured it would be a good way for her and a couple of neighbours to burn off some energy and stave off boredom a few times a week.

Her one-hour session of heel digs, vine steps and weaves proved so popular that she now does it every day, becoming something of a sensation in her Roncesvalles neighbourhood, just west of downtown.

“People came out, and then more people came out and then cars started honking,” she says. “I hate my picture being taken. By now I must’ve had a thousand pictures taken.”

On a recent weekend, about a dozen locals take spots two metres apart from one another on the opposite sidewalk and mimic Ms. Hunt-McDougall’s movement. Participants range in age from 10 to 76. Their joyful movements, along with Ms. Hunt-McDougall’s enthusiasm, feel like a form of rebellion against the relentless daily gloom of life during a pandemic.

“My heart swelled watching them,” commented one woman pushing a stroller.

Many fitness classes have gone online, with participants logging in with Zoom or some other video-chat service. While it’s better than nothing, these virtual classes lack several key elements that come with sweating in groups.

Research has found that perceptions of group cohesion during exercise are linked to enjoyment and exertion. To put it crudely, the closer the group, the fitter and happier the participants.

Long before the COVID-19 epidemic, Canada was facing an epidemic of sloth. Obesity rates have doubled since the 1970s. Statistics Canada researchers have found that just 16 per cent of adults meet recommended physical activity targets. Those figures are likely to worsen under isolation orders.

“From a population perspective, we really weren’t doing a great job of being active pre-COVID-19,” said Mark Eys, Laurier Research Chair in Group Dynamics and Physical Activity at Wilfrid Laurier University. “However, the importance of engaging in physical activity in our current situation may be even more pronounced as it is beneficial for physical health, mental health, sleep patterns and managing emotions.”

Regular exercise can help protect against viruses as well. A study of the 1998 Hong Kong flu epidemic found that people who exercised three times a week were less likely to die. Research at the University of Illinois at Urbana-Champaign showed that rats were more likely to survive rat influenza if they spent half an hour a day on a treadmill.

Guadalupe Bertoli doesn’t need rats to tell her about the downsides of self-isolation. The 75-year-old resident at the Caboto Terrace seniors’ residence in Toronto says she’s been nervous, depressed and sluggish since public health officials recommended seniors remain at home.

“I’ve been chewing my nails. I never did that before," she says.

There have been at least two COVID-19 cases recorded at the complex. But on a recent day, there was a samba beat floating up to Ms. Bertoli’s balcony from the parking lot and her mood was taking a turn for the better.

Down below, standing between a Toyota Corolla and a Chevy Impala, four Zumba instructors wearing protective masks were shouting out motivation as they danced their way through Mambo Italiano.

The complex usually holds daily indoor exercise classes for residents. Management held the balcony class to inject some fun and health into their solitary lives.

“We have a huge concern from them right now,” said one of the instructors, Gabriella Lalli. “For many of them, this could be the first 20 minutes of exercise they’ve had in weeks.”

Around 45 elderly residents had emerged on balconies of the 14-storey building to mirror the movements of the instructors. “This is beautiful,” said Ms. Bertoli, breathing heavily. “So much life.” 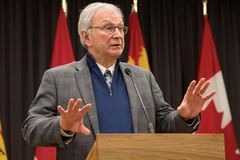 Toronto launches ‘rebuild strategy’ to determine how the city might function coming out of the pandemic
April 24, 2020 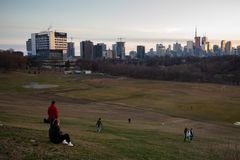 Coronavirus information
The Zero Canada Project provides resources to help you manage your health, your finances and your family life as Canada reopens.
Visit the hub
Follow Patrick White on Twitter @Nut_Graf
Report an error Editorial code of conduct
Due to technical reasons, we have temporarily removed commenting from our articles. We hope to have this fixed soon. Thank you for your patience. If you are looking to give feedback on our new site, please send it along to feedback@globeandmail.com. If you want to write a letter to the editor, please forward to letters@globeandmail.com.
Comments