Dennis Oland’s acquittal in the 2011 murder of his father has left many questions about what comes next for the member of one of Atlantic Canada’s most prominent families following a very public eight-year legal ordeal.

The 51-year-old former financial adviser hugged his defence team following Friday’s decision by Justice Terrence Morrison, but accompanied by members of his family, he quickly departed the courthouse without talking to reporters.

It was left to his Toronto-based defence lawyer, Alan Gold, to speak to Oland’s state of mind after what he called “a very punishing eight years” for his client and his family.

“Right now he is entitled to as much private time with his family, where he can just lie there and convince himself that it’s finally over. That is going to be his big psychic task – he’s going to wake up and not believe it’s finally over, because it’s gone on for so long.”

Oland was washing his car when he was arrested and charged with second-degree murder in 2013, two years after his father, prominent businessman Richard Oland was bludgeoned to death in his uptown Saint John office.

Gold recounted the roller-coaster legal journey that ensued, including Oland’s conviction by a jury at the end of his first trial in 2015, his incarceration and release following several appeals, and then ultimately a second trial that resulted in his acquittal by judge alone.

Members of Oland’s family have been unwavering in their support since his arrest, including his mother Connie, his wife Lisa, his four children, and his uncle Derrick Oland, the executive chairman of Moosehead Breweries Ltd. – Canada’s oldest independent brewery and the long-time family business.

“We wish to restate our steadfast support for Dennis and our faith that the judicial process will prove his innocence,” the family said in a statement issued last November.

Richard Oland was a former vice-president with Moosehead Breweries until he lost out in a succession dispute and left to run his own enterprises.

The court heard he had amassed a fortune worth an estimated $36-million, and despite a relationship that was strained at times, he extended generous loans to his son, who was deeply in debt by the time of the murder.

The retrial was told Dennis Oland, who worked at CIBC Wood Gundy, had reached the limit on most of his personal accounts despite having his credit limits raised by thousands of dollars. He was struggling to meet commitments that included $4,300 per month for child and spousal support and more than $1,650 owed to his father each month for a $500,000 loan made two years earlier.

The indebtedness was a big part of the prosecution’s theory in the case and was fodder for much speculation in Saint John, a port city of about 70,000.

Now Oland is left to pick up the pieces after one of the most sensational criminal cases to grip the Maritimes in decades.

Gold said Oland will find it hard to believe his ordeal is truly over. “Just leave him in peace and let him come to the wonderful realization it is finally over,” he told reporters.

“I only do criminal defence work. I have no idea about civil suits,” he said. 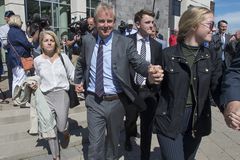 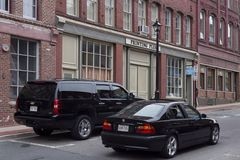 ROB Magazine
Beer, money, sex and murder: How the Oland business dynasty was shaken to its core Subscriber content
November 12, 2017 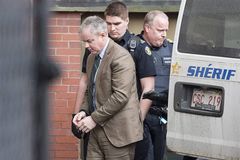