On the Muskoka lakes that form the heart of Ontario’s cottage country, most everyone travels by boat between multimillion-dollar vacation homes, grocery stores, golf resorts and waterfront bars. Most trips are a summer dream, a chance to skim across the water past granite cliffs and pine forests.

As cottagers arrive in Muskoka for the final long weekend of the summer, the talk on the dock is of a late-night outing on Lake Joseph last Saturday that ended in disaster. According to police, two boats collided near Emerald Island around 11:30 p.m. The boats involved were a Cobalt speedboat owned by reality-TV star Kevin O’Leary and his wife, Linda, and a water-ski boat, according to a local marine owner who services the two craft. Two of the passengers in the low-slung ski boat died in the accident. Amid conflicting versions of the events leading up to the collision, the Ontario Provincial Police are deep into an investigation. No charges have been laid.

According to the couple’s friends in cottage country, Mr. O’Leary, star of Shark Tank and a former leadership candidate for the federal Conservatives, and his wife were heading back to their cottage after an evening at a friend’s place. At the same time, Suzana Brito, a 48-year-old married mother of three from Uxbridge, and retired accountant Gary Poltash, aged 64, were among a group seated in a 12-passenger boat that was on its way back to a mutual friend’s cottage. They had been watching fireworks from a nearby resort and taking in the night sky.

The moon was below the skyline, so the lake was dark. According to a statement released by Mr. O’Leary, he was a passenger in the speedboat and both he and the police have not said who was at the wheel. Mr. O’Leary did say the water-ski boat had its navigation lights turned off. Relatives of Mr. Poltash, who were not on the boat, have disputed this assertion, telling U.S. media outlets the boat was running with lights.

The two boats collided about 150 metres from shore, not far from Rocky Crest golf club. Mr Poltash died at the scene. Ms. Brito died two days later in hospital from massive head injuries. Three other passengers from the water-ski boat were taken to hospital, treated and released.

After the accident, both boat drivers headed for shore to get help. The O’Learys pulled their boat into the nearby golf club, which was holding a wedding reception at the time. The OPP say they received 911 calls from both parties, requesting ambulances.

To date, the OPP have said little about what happened off Emerald Island, which is home to one large cottage. The day after the accident, the police hauled Mr. O’Leary’s boat away from Hamer Bay Marine Ltd., which has docks next to Rocky Crest, the marine owner said. A police boat spent Thursday night touring the area with the driver of the boat that carried Mr. Poltash and Ms. Brito, according to staff at a local marina. The work is being done by the OPP’s criminal investigation branch, which deals with complex cases. OPP West Parry Sound Constable Joe Scali said Friday that police are currently examining all statements.

“We’re just going through everything. And we are receiving leads from the public as well,” Constable Scali said. He wouldn’t disclose whether there is any video evidence, or how many people have been interviewed. He said: “Because the event did happen at night, no, there were not a lot of people out travelling around there. And that’s why we’re canvassing [the] area as well for any kind of information. That’s what the investigation is ongoing with.”

As part of the OPP investigation, police are checking to see if alcohol or excessive boat speed were factors, and have yet to announce their findings.

To date this year, 15 boaters have died in Ontario in 12 accidents, including last Saturday’s crash in Muskoka, according to the OPP. Last year, 14 people died on the water in 13 incidents.

U.S. celebrity website TMZ was the first outlet to report on the Muskoka accident, a reflection of Mr. O’Leary’s star turn on U.S. reality TV. The former star of CBC’s Dragon’s Den also ran for leadership of the federal Conservative Party in 2017. He was considered a front-runner in the race before abruptly dropping out to support Maxime Bernier, who lost by a slim margin to current leader Andrew Scheer. Mr. O’Leary then launched a federal court challenge to Canada’s election laws that prevent him from personally paying off his campaign debt.

“I’m representing him as his lawyer on a number of matters, and he has consulted me, and I have been dealing with him in connection with that, but again, my experience is that most witnesses do not go out and hire lawyers,” Mr. Groia said. “I’ve never heard of the OPP ever investigating or charging somebody who’s a passenger in a car, or a boat, or a bus, or a train, or an airplane.”

On Friday night, Ms. Brito’s family gathered for a memorial service in Uxbridge, just north of Toronto. She leaves children aged nine, 11 and 12, her family said in a statement released by the Uxbridge mayor’s office. They asked for privacy “as our family copes with her loss” and helps her children “navigate the coming days.”​

Kevin O’Leary says he was involved in a fatal boat collision in Muskoka
August 29, 2019 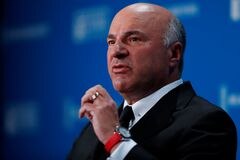