The start date for the construction of Canada’s only commercial spaceport has been pushed back indefinitely, a developer said after meetings at the proposed rocket launch site near a small fishing community on Nova Scotia’s eastern shore.

Stephen Matier, president and chief executive of Maritime Launch Services Ltd., said his firm had hoped to break ground this month on the $200-million project that could eventually see as many as 12 satellites blast into orbit each year.

But Mr. Matier now says the launch site in Canso, N.S., likely won’t start being developed until later this year, although he was hesitant to impose any new timeline.

“As part of the process, I try to move things along. But the process is the process. There’s 12 months of data collection. There’s a report that has to be written. There’s a review process that has to happen,” Mr. Matier said in a recent phone interview, as he waited to fly back home to New Mexico from Halifax Stanfield International Airport.

“I can hope for things, but the real take away is that we are absolutely following all of the processes as they’re laid out.”

The project doesn’t plan to put humans into space, but is rather aimed at attracting consortiums of firms that want to put satellites into orbit for commercial purposes, such as near-Earth imaging.

The project is a private-sector venture, but requires the province’s environmental approvals and other regulatory approvals.

There are still a number of hurdles to overcome before construction can begin, but Mr. Matier said good progress has been made.

He also visited the site in Canso and met with a community group that included officials with Guysborough County, the fisheries industry and residents.

“I’ve been delighted by the level of support from the community,” Mr. Matier said, adding that AJ’s Pub Dining Room and Lounge in Canso has created a four-meat pizza dubbed Cyclone-4M – a launch vehicle that would be used at the proposed site.

Mr. Matier said he expects to be back in the province within the next two or three weeks to submit an environmental assessment to the province.

He said the engineering firm hired to carry out the assessment has completed their report, but another technical edit is required before it’s submitted to Nova Scotia’s Environment Department for review.

The assessment will also go the Natural Resources Department as part of the company’s Crown land lease application.

“[The environmental assessment] is the real big key piece for us,” he said, adding that the review process takes around 50 days.

“If all the regulatory approvals go well, then we’ll be able to get the land lease application finalized and everything ready to go so we actually have control of the property so that we can actually do the groundbreaking we want to do to get things started a little later this summer or early this fall.”

He said his company is still aiming for the first round of satellite launches to begin in 2021 and 2022.

Matier said he’s also been meeting with satellite manufacturers and investors in Toronto and Ottawa. He said the financing pieces of the project are “comfortably starting to fall into place.”

“It’s hard to get a company to put in the significant dollars we’ll probably need to finish this all off if we don’t have control of the land that we’re planning to do it on,” he said.

Discussions with Transport Canada are continuing, and Mr. Matier said Maritime Launch Services has already provided the department with documents related to ground safety and flight safety, and is working on obtaining an aeronautical study related to restricted airspace.

Mr. Matier has said the rocket will move over 20,000 metres through the sky within 105 seconds, with the public able to view the spectacle from vantage points at Little Dover, N.S., about eight kilometres south of Canso.

He said the rocket complex will feature three sites: the launch pad area which is closest to the water, the facility where the different rocket stages and payloads would be integrated, and the launch control centre.

In December, a meeting of project proponents was attended by executives from the Ukrainian-based Yuzhnoye Design Office – the makers of the Cyclone-4M medium lift rockets. 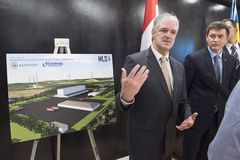