A dispute between a recognized First Nation and Indigenous occupiers of a former army camp along Lake Huron where protester Dudley George was killed by police nearly 25 years ago has stopped work to remove explosives at the 1,000-hectare site. The land is slated to return to the Chippewas of Kettle & Stony Point after expropriation in the Second World War led to the forced relocation of the occupiers’ ancestors and amalgamation of two bands.

The protest by the occupiers and allies, who call the land Aazhoodena, or Stoney Point (adding the “e”), began in March, at the gatehouse controlling access to the dilapidated buildings of the former Camp Ipperwash. The protest group is frustrated by the state of the old army barracks some have lived in for years, and feel ignored in a quest for jobs in the land cleanup. The Stoney Pointers moved a trailer to block an access lane and took up positions alongside the gatehouse attendants, employed by the nearby First Nation on contract from the Department of National Defence (DND), which still controls the land.

The roots of the current dispute lie in how to spend $95-million from a 2016 agreement between Ottawa and Kettle Point. The band plans to use much of the money to redevelop the area when clearance of unexploded munitions (UXOs), left over from the postwar years when the land was used as an army training ground, is completed. The protesters want some of the funds spent immediately to improve the existing barracks buildings and provide them with jobs.

National Defence says clearance work “has been put on hold while we work with the Chief and Council to come up with a resolution,” according to an e-mail response. DND states no safety or security incidents have been reported since the protest began.

One of the occupiers, Martin Kewageshig, who says he arrived with the first occupiers in 1993, refuses to call the group’s recent actions a protest, calling them an “assertion of rights” by the Stoney Pointers, who he says are treated as inferiors by the established band chief and council up the road a few kilometres. He estimates around 60 to 80 people live at the site, more during the summer.

Kettle Point Chief Jason Henry says he has met with the protesting group about resolving the conflict, but discussions “never resulted in anything.”

“This is a very delicate situation," Mr. Henry says. “In 1995 something very tragic happened in this community and that’s always in the forefront of my mind. Whatever steps we take, whatever steps we consent to, we never want anything like that to ever happen again in our community.”

Mr. George was shot by OPP acting sergeant Kenneth Deane two days after protesters occupied a provincial park next to the army base. Mr. Deane was later charged and convicted of criminal negligence causing death and resigned from the force.

The situation dividing the community today could provoke “another Ipperwash incident,” says Kettle Point resident Gina Johnson, who staged a protest in early June demanding action to remove the protesters at the Stoney Point gatehouse. She fears without a resolution soon there is potential for violence.

The blockade is hurting local workers, including her three nephews, Ms. Johnson says. “They were down there, gainfully employed, now they’re laid off, and they have families to feed.”

Ms. Johnson says she was also part of the group that occupied the camp with Mr. George in the nineties. “I was there getting shot at. I picked him [Dudley George] up off the ground [when he was shot]. I am deeply vested in this.” She said she wants to leave her grandchildren a better legacy than the run-down buildings that are in the camp.

She intends to keep up pressure on chief and council.

Mr. Henry says DND has made “great strides” in improving the housing situation in the old barracks, a claim disputed by Mr. Kewageshig and band member Jennifer George, who also guards the gate for the Stoney Pointers’ side.

“The funding is not being funnelled through to even take care of basic human necessities. Every time somebody asks for something from the [Kettle Point] community … it’s denied,” Mr. Kewageshig says.

Information provided by DND shows the military has spent between $1.2-million and $1.3-million annually on the buildings and services since 2012. That includes around $750,000 annually to Kettle Point for work conducted at the site and to employ gatehouse attendants, as well as payments for electricity, natural gas heating and sewage treatment for the occupied buildings.

Even so, there are “well-documented health concerns” for people living in the buildings, including “the presence of asbestos, mould, and lead-based paint and piping,” according to a consultant’s report prepared about three years ago for the Kettle Point council.

Mr. Henry has been taking steps to try to get some of the local workers back on the job, announcing recently a plan to open a new gate for contractors, bypassing the gatehouse. But Anishinabek Police Service Inspector Barry Petahtegoose said that even if the gatehouse is reopened, only maintenance workers will be entering, not the UXO cleanup specialists.

Hubert George, who helped stage the protest, would not say whether his group would blockade the new entrance. DND refused comment about a resumption of work.

DND estimated in 2016 clearing the land of hazards would take around 20 years. In March, the department said around 11 per cent of land possibly holding UXOs has been cleared, and 74 items have been found and destroyed, including rocket and grenade components. Remediation costs are being paid by DND.

With close to 30 band members out of work, the UXO cleanup at a standstill, and community members wanting him to take a firmer hand with the blockaders, Mr. Henry says he hopes to find a solution soon. “We have a shortage of land, we have a shortage of housing, and our people have been displaced from that land for 70 plus years. Yes, I’m frustrated.” 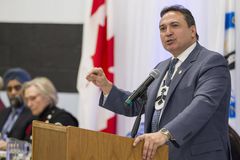