Playing a round of golf. Doing a crossword puzzle. Designing a virtual world in Animal Crossing.

Activities such as these may seem frivolous, but they could be exactly what you need to weather the COVID-19 pandemic. Researchers suggest the benefits of play are not limited to children. Play and playfulness can help adults feel more satisfied with their lives, boost their mood and be more innovative.

Contrary to what many believe, playfulness “is not only about silliness and fun,” said René Proyer, a professor of psychology at Martin Luther University Halle-Wittenberg in Germany. “It can also have a serious side.”

In a recent study, published in the journal Applied Psychology: Health and Wellbeing, Proyer and his team found that after practising simple exercises, such as writing down the playful things that happened each day, participants reported an increase in playfulness, their sense of well-being improved and their depressive symptoms were reduced.

While research has long established that play is critical for the cognitive, emotional and physical development of children, the role of play and playfulness in adults has received considerably less attention.

Part of the reason is that once you’re no longer a child, playfulness is generally frowned upon, said Garry Chick, professor emeritus of recreation, park and tourism management at the Pennsylvania State University, who studies play and playfulness in adults. As the saying goes, he said, “idle hands are the devil’s playground,” which implies when people aren’t working, they’re up to no good.

The concept of play in adults is also very difficult to define. An activity that feels like play to one person, whether it’s gardening, cooking or even analyzing data, can be another person’s idea of drudgery.

“We know it when we see it,” said Chick, a co-author of the Applied Psychology study, but scientists have yet to fully agree upon its defining qualities.

But many agree that playfulness is a personality trait, like aggressiveness or extroversion, he explained. And play is the behaviour that arises from playfulness.

Proyer sees playfulness as a way of thinking about the world, a disposition that allows people to frame or reframe everyday situations to experience them as entertaining, intellectually stimulating or personally interesting.

There are several reasons why playfulness can be beneficial, he says.

“The shortest possible answer is that playing and being playful is fun and it’s entertaining, and ideally it’s not only for you, but also for others,” Proyer said.

More specifically, he said, some research suggests playfulness is tied to experiencing more positive emotions, such as joy and amusement, which boost one’s mood and foster creative thinking. While negative emotions, such as fear and stress, help you shut off other thoughts to allow you to respond to an immediate threat, positive emotions are more conducive to thinking about an array of possibilities and different perspectives, Proyer said.

Paulette Guitard, a professor of occupational therapy at the University of Ottawa’s School of Rehabilitation Sciences, believes playfulness could help mitigate some of the stress and anxiety prompted by the pandemic.

Her research has found adults who are more playful are able to make the best out of a bad situation. They tend to see adversity as a challenge and look for ways to adapt and carry out activities that give them meaning, purpose and joy, Guitard said.

In the context of her field, Guitard tries to cultivate playfulness in occupational therapy clients, encouraging them to play with ideas or try different ways of doing things, regardless of whatever disability they may have. The goal, she said, is not necessarily to engage them in games, but to help them recognize the value of seeking enjoyment and pleasure.

“The activity is not as important, but it’s more the attitude,” she said.

Its impact on personal well-being aside, Chick says he believes playfulness also plays a role in our evolution as a species. He proposes playfulness is important for sexual selection: males, he suggests, may prefer females who are playful because it’s a sign of youthfulness and, thus, fecundity, while females may prefer playful males because it’s a sign they’re not dangerous, particularly to offspring. His research has found playfulness is indeed a trait people tend to look for in a partner.

In their recent study, Proyer and Chick and their colleagues tested three training exercises and found they worked equally for boosting playfulness in adults. These involved writing down three playful things that happened during the day before bedtime, challenging oneself to use playfulness in a new way (such as doing something playful in the workplace) and counting the number of playful experiences one encountered throughout the day.

Whether the effects of training can last beyond the 12 weeks of the study remain to be seen, and Proyer emphasizes it would be wrong to conclude that everyone needs or even wants to be playful. But for many, playfulness may provide some much-needed levity, especially during these uncertain times, he said.

“In general, I think most people can deserve a little dose of playfulness in their everyday life."

Alone during the pandemic, I swing from misery to contentment
September 27, 2020 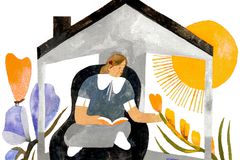