The growing threat of measles is prompting health centres across Canada to introduce new measures to stop the spread of the highly contagious virus, including banning unvaccinated individuals from their facilities.

An obstetrics and gynecology clinic in Calgary decided to ban unvaccinated children from its practice last week after a case of measles was confirmed in the city. Fiona Mattatall, an obstetrician-gynecologist who runs the clinic with four other doctors, said they placed a sign in the waiting room instructing parents not to enter with unvaccinated children.

Kids who come to appointments with their mothers are not patients of the clinic, and the doctors felt they had to block them from coming if they are unvaccinated to protect others, such as newborns, who can’t be vaccinated, and women with health conditions that prevent them from getting vaccines, Dr. Mattatall said. Some women may have to miss their appointments as a result of not being able to find care for their unvaccinated children, but Dr. Mattatall said the potential risks are too great to allow them to enter.

“We do have that ethical dilemma,” Dr. Mattatall said. “But on the other hand, we really don’t want our office to be a place of exposure and we don’t want to put our patients at risk.”

In recent weeks, Dr. Mattatall said a growing number of new mothers have been coming to their postnatal appointments without their newborns, choosing to leave them at home over fears of measles exposure.

Signs also went up at BC Children’s Hospital, during the province’s recent outbreak of measles, warning unvaccinated individuals, such as siblings of patients, to stay away. The signs were placed in areas where exposure to measles would be “devastating," such as the oncology unit, said Jocelyn Srigley, medical microbiologist and corporate director of infection prevention and control at B.C.'s Provincial Health Services Authority. The neonatal intensive-care unit at BC Women’s Hospital and Health Centre has had a long-standing policy in place to verbally screen all visitors to ensure they are vaccinated before entering, she said.

BC Children’s also stationed a triage nurse in the hospital’s vestibule to screen for potential measles cases so those patients could be isolated immediately and not enter a crowded waiting room.

Measles is so contagious that 90 per cent of unvaccinated people will become infected if they are in the same room as someone with the virus. The risk of infection remains for up to two hours after an infected person leaves a room.

At the IWK Health Centre in Halifax, there’s a new push to ensure that health workers know how to recognize measles, said Jeannette Comeau, medical director for infection prevention and control and a pediatric infectious disease physician at the centre. The province has not yet had any cases, but with measles on the rise worldwide, it’s important to be vigilant, she said.

“We know that it’s just a plane ride away and a child could walk through the doors at any moment [with measles]," Dr. Comeau said.

She has been working with triage nurses to help them identify the signs of measles and is also teaching medical residents and trainees who have never seen a case of measles about the symptoms and what a measles rash looks like. Dr. Comeau said several memos have gone out to hospital staff to warn them about the virus and to ensure everyone is aware of what to do if an individual who may be infected comes in.

Dr. Comeau said there’s been a significant jump in the number of parents asking about getting their babies vaccinated early. According to Canadian vaccine schedules, infants should get the measles, mumps and rubella vaccine between 12 and 15 months, but it is possible to have them vaccinated as early as six months, Dr. Comeau said. However, they will still need to receive two supplemental doses after their first birthday, she added.

Althea Hayden, medical officer of health with Vancouver Coastal Health, said she’s sent a number of alerts to physicians in the community about how to manage the potential risks of measles, including having patients wear masks and seeing those patients at the end of the day, when the risk of transmission to someone else is low.

The total number of measles cases so far this year among B.C. residents or people who travelled through the province is 18. While that isn’t a huge number, Dr. Hayden said what’s different this year is that there are more travel-related cases than in the past. And that as long as measles cases continue to rise worldwide, that is going to pose a problem here in Canada.

“It wasn’t a super notable outbreak in and of itself. What was really notable is we are getting so many importations, so we’re probably going to keep getting those until the worldwide burden of measles goes down,” she said.

From the comments: Should vaccines be mandatory? Readers debate as anti-vaccine billboards appearing in Toronto
February 27, 2019 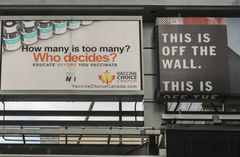 Globe editorial: To protect the vulnerable, vaccines should be mandatory
February 26, 2019 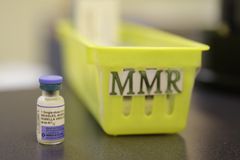 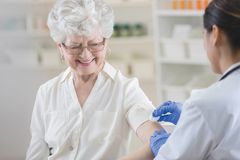