Ontario Premier Doug Ford apologized over recent unpopular measures to battle COVID-19, and pledged to bring in a paid sick-day program after months of resisting such a move. But he ignored calls from science advisers to impose further restrictions on businesses.

Speaking at a news conference on Thursday from the backyard of his late mother’s home – where he is in isolation after coming into contact with a staff member who has COVID-19 – Mr. Ford said he knows people are angry about his government’s recent measures.

The government backtracked on closing playgrounds over the weekend, as well as on issuing sweeping new powers that would have allowed police to stop anyone on the street or in cars under the provincial stay-at-home order. But some medical experts have called for other changes – such as further restricting workplaces where COVID-19 is spreading and reversing the closing of outdoor recreational facilities.

“I know we got it wrong, I know we made a mistake. And for that, I’m sorry, and I sincerely apologize,” said Mr. Ford, who grew emotional as he spoke of the public’s frustration and sadness after seeing loved ones die.

The province’s COVID-19 Science Advisory Table, an independent body advising the government, has been calling for paid sick days and recently recommended narrowing the list of those businesses that stay open to “only truly essential indoor workplaces.” This would help to bring cases down, it said, and reopen safely as soon as possible.

For now, some local public-health units are stepping in. Toronto and Peel Region issued new orders this week to shut down workplaces with outbreaks – after a similar move in British Columbia.

Asked about whether he is going to make further changes to essential businesses, Mr. Ford said only that his government acted to limit mobility after seeing modelling last week that predicted Ontario could see up to 15,000 cases a day.

“This is all about mobility. … I’m sorry we acted too quick on the measures,” he said.

Mr. Ford, who had not made any public comments since Friday, also said his government will be bringing in measures to close the “gaps” in the federal sick-pay program. He did not offer specific details or a timeline.

The Premier, who has called a provincial sick-pay program “double-dipping,” acknowledged that it takes too long for essential workers to get payments from the federal government. But he said he doesn’t want to put the burden on the backs of businesses who have suffered throughout the pandemic, meaning any changes will be funded by the provincial government.

Quebec and Prince Edward Island are the only provinces to mandate paid sick days.

Nathan Stall, a geriatrician and assistant scientific director of the science table’s secretariat, said Mr. Ford’s apology appeared sincere but it was “bizarre” that it seemed to focus on acting too quickly on policing measures.

“It seemed to be more an apology again for the poor communication and decision-making that happened last Friday, as opposed to real accountability for the situation that still is out of hand and will only get worse during the third wave,” Dr. Stall said. “We’re almost a week later, and nothing more has been implemented.”

He said any provincial paid sick-leave program has to address some of the problem’s in Ottawa’s plan – including a delay in people receiving payment and access for those who need to self-isolate immediately before they have lost salary. “Is this going to be, as has been hinted, just topping up the federal program? That would be a policy failure in my opinion.”

Last week’s missteps on playgrounds and increased police powers took place as the government has struggled repeatedly to get its footing to curb the spread of more deadly variants as the third wave intensified this month.

The recent confusion is partly owing to the Premier’s emphasis on achieving consensus, according to two sources familiar with the government’s deliberations.

Cabinet ministers argued back and forth on some measures for eight or nine hours in meetings that stretched on for two days, the sources said. The Globe and Mail is not identifying the sources because they were not authorized to publicly discuss the issues.

The Premier has come under intense public criticism in recent days, including calls from the opposition for his resignation. NDP Leader Andrea Horwath called on the government to do more immediately – including giving workers sick pay, closing non-essential businesses and sending more vaccines to hot spots.

One order allows workers to provide patient care outside their regular scope of practice. The other allows out-of-province health care workers to practise in an Ontario hospital without registering with regulatory colleges in the province.

Health Minister Christine Elliott said the government is trying to “maximize capacity” as 800 patients with COVID-19-related illnesses were reported in the province’s intensive-care units on Thursday. “At the same time as we’re creating more beds … we also need the staff to be able to do the work there,” she said.

Meanwhile, Ontario Chief Medical Officer of Health David Williams said with the province’s number of new daily cases – which hit 3,682, the second day this week below 4,000 – could be plateauing but that it was too early to say. Hospital admissions and intensive-care occupancy hit records, and there were 40 deaths, the most in a single day in the third wave.

However, more people were dying of the virus at home. Dirk Huyer, co-ordinator for the province’s outbreak response, said he was concerned that more COVID-19 cases than in previous waves were dying after a rapid deterioration in the community, without ever making it to hospital. He said the ages have ranged from people in their 30s to their 70s.

With reports from Jeff Gray and Jill Mahoney in Toronto 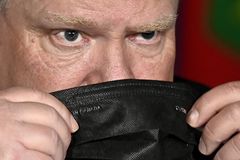 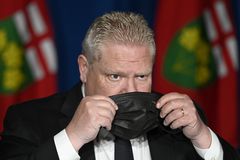