Ontario Premier Doug Ford insists that “no one can influence” him improperly following reports that his party has enlisted registered lobbyists to help sell tickets to a coming fundraising dinner.

Several lobbyists, companies and industry groups say they feel pressure to attend the $1,250-a-person Progressive Conservative Party event in order to maintain high-level access to the government, The Globe and Mail reported this week.

In a letter to Elections Ontario on Friday, Green Party Leader Mike Schreiner asked chief electoral officer Greg Essensa to determine whether the PC Party’s alleged pressure on companies to sell tickets to clients is an attempt to bypass the province’s ban on corporate donations.

“These allegations are serious and a matter of public importance,” Mr. Schreiner wrote. “Ontario’s election financing laws are critical to protecting our democracy.”

Lagging ticket sales for the Feb. 27 Leader’s dinner have prompted intense efforts to convince people to attend and also help fill seats, The Globe reported. Lobbyists said they felt pressure to assist in order to keep getting meetings with senior officials on behalf of their clients. In addition, a source with business before the government said he was told by a party fundraiser that a failure to buy tickets would be reflected in a lack of future high-level access. The sources were granted anonymity because of fears of negative professional consequences.

Marcus Mattinson, a PC Party spokesman, said earlier this week that it is “categorically false” that party fundraisers are communicating that government access could suffer if people don’t buy tickets for the dinner.

Mr. Ford on Friday was blunt about the need to hold paid events to finance his party, telling reporters, “We have to run campaigns.” And he touted the fact the party is holding a range of fundraisers and events at different ticket prices, including “$25 spaghetti dinners” and “freebies.”

“This scheme is laced with threats about who will be allowed into Doug Ford’s back rooms, and who will be locked out,” MPP Taras Natyshak said in a statement.

It is not unusual or against the rules for political parties to team up with lobbyists to help with fundraising. Some sources, however, say the Tories are exerting unprecedented levels of pressure, coupled with the message that not selling tickets could lead to reduced access.

Mr. Ford’s defence echoed that of former premier Kathleen Wynne, who became embroiled in a cash-for-access scandal when The Globe revealed in 2016 that business leaders and lobbyists were paying the Ontario Liberal Party as much as $10,000 for a chance to meet privately with Ms. Wynne and members of her cabinet over dinners and drinks. Ms. Wynne insisted that she was not influenced by campaign donations, argued the fundraisers were necessary because the Liberals needed the money and pointed to the range of events she attended.

Under pressure from the mounting scandal and the opposition parties, Ms. Wynne ultimately passed new campaign-finance laws that included a ban on politicians from attending fundraisers. Mr. Ford’s government rolled back that rule in amendments that took effect on Jan. 1.

The PC Party is hoping to raise at least $2-million from the dinner, according to sources, which PC Ontario Fund chairman Tony Miele is billing as the largest fundraiser in party history. 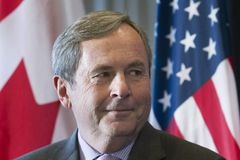 Follow Jill Mahoney and Adrian Morrow on Twitter @jillsmahoney @adrianmorrow
Report an error Editorial code of conduct
Due to technical reasons, we have temporarily removed commenting from our articles. We hope to have this fixed soon. Thank you for your patience. If you are looking to give feedback on our new site, please send it along to feedback@globeandmail.com. If you want to write a letter to the editor, please forward to letters@globeandmail.com.
Comments