The federal government says it will provide $14-billion to help provinces as their economies begin to emerge from COVID-19 lockdowns, but Ontario and Quebec immediately raised concerns about the adequacy of the money.

Prime Minister Justin Trudeau said on Friday that Ottawa has made a “substantial offer" to the provinces and territories to ensure a standard of safety across the country.

“We know that the provinces and territories are under a lot of pressure right now and are facing real financial challenges because of this pandemic,” Mr. Trudeau said.

“We want to help as much as possible. And we must move quickly and carefully to get this done.”

The Prime Minister said the federal money would be to cover provincial health care costs, personal protective equipment (PPE) for health workers and businesses, child care, “immediate assistance” for vulnerable seniors, and a plan to guarantee 10 days of sick leave for workers over the next several months. Also on the list is cash for cities and for public-transit systems left in financial ruin after ridership evaporated.

The leaders in the hardest-hit provinces, Ontario and Quebec, expressed concerns about the funding and how it would be doled out.

Ontario Premier Doug Ford, who has praised Ottawa throughout the pandemic, said Ontario estimates it will need up to $23-billion to deal with the impact of COVID-19, including more funding for health care, PPE, municipalities and long-term care.

“Fourteen billion for all of Canada just won’t cut it," Mr. Ford said at Queen’s Park.

“You spread that across Canada, it doesn’t even cover Ontario, not to mention Quebec. We have large populations with a lot of needs. And as much as we are grateful, I just hope it’s the start of a conversation, not the end of a conversation.”

Quebec Premier François Legault said he made clear to Mr. Trudeau that he was concerned about how much money Quebec would get, and how it will be used.

“We think the way to divide the $14-billion should not be based solely on population but also on the cost generated by COVID-19 since, relatively speaking, we were hit harder in Quebec than other provinces,” Mr. Legault told reporters.

“We ought to have more than the 23 per cent that represents our population.”

Mr. Legault also said the transfer should not come with conditions, so provinces can use the money for needs they have identified. In Quebec’s case, he said, the priority would be elder care homes, testing and protective equipment.

Mr. Ford also came out against Ottawa’s plan to impose 10 paid sick days, first proposed by British Columbia Premier John Horgan. Federal NDP Leader Jagmeet Singh supported the Liberals’ motion to suspend the House of Commons until September in exchange for a pledge to work with the provinces on guaranteed paid sick leave.

“That’s a priority for B.C., but there wasn’t too much take-up on that right across the country," Mr. Ford said, adding that no one who feels unsafe has to go to work.

Mr. Horgan told a B.C. radio show on Friday, however, that he feels he has support from across the country on the proposal. “I’m very grateful that the federal government is going to pick up the tab,” he said.

The Federation of Canadian Municipalities had called for at least $10-billion in funding from Ottawa just for municipalities to deal with effects of COVID-19 – with a large proportion earmarked to help cities with transit systems.

Toronto Mayor John Tory has warned that his city’s $1.5-billion shortfall due to COVID-19 could force him to lay off 19,000 staff, dramatically hike property taxes and close rapid-transit lines.

He said on Friday the Prime Minister’s announcement is not enough.

“It represents a first move by the government of Canada, but it cannot be the only news as it relates to cities,” Mr. Tory said, adding that Ontario must now also put money on the table. 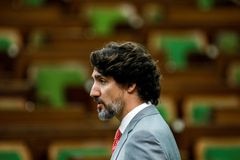