The Ontario government is cancelling arbitration proceedings with the province’s physicians, a move that the Ontario Medical Association is denouncing as “unprecedented” and “an affront to the rule of law.”

The province says it is terminating the arbitration hearings – which were scheduled to wrap up this month – because of the acrimony within the province’s medical profession.

Last month, a subset of high-billing specialists voted in an online referendum to leave the OMA, the official negotiator for nearly 31,000 practising physicians in the province.

The fledgling Ontario Specialists Association said it has the support of eight specialty physician groups and a mandate to urge the Ontario government to amend legislation that currently bars the province from negotiating physicians' fees with anyone other than the OMA.

The OMA has countered that fewer than 5 per cent of the province’s doctors actually voted to join the breakaway association.

“There is clearly a public dispute in the profession about whether the OMA is the exclusive representative of physicians in Ontario,” Craig Rix, a lawyer for the Ministry of Health and Long-Term Care (MOHLTC) wrote in an e-mailed letter to the head of the arbitration board on Monday. “The MOHLTC lacks confidence that the OMA can deliver on the outcome of any arbitration decision.”

The OMA rejected that argument, telling arbitrator William Kaplan in its own legal letter, sent on Tuesday, that it was “unfounded and totally erroneous,” to suggest the OMA would be incapable of putting an arbitration settlement into action. Either way, the OMA’s lawyers argue the government cannot unilaterally terminate the arbitration proceedings.

"We believe the government is trying to pull the plug on arbitration because it knows arbitration will mean a fair deal for doctors,” Nadia Alam, the president of the OMA, wrote in a letter to members on Tuesday evening.

Dr. Alam was out of the country and not available for an interview. A spokeswoman for Health Minister Christine Elliott did not respond to a request for comment.

The Progressive Conservative government’s bid to cancel arbitration is the latest twist in a nearly five-year battle between Queen’s Park and doctors, who have been without a contract since March 31, 2014.

The previous Liberal government earned doctors’ ire when it unilaterally clawed back some fees and froze others as the two sides proved incapable of reaching a fee deal.

Relations between the two sides began to thaw last year when Kathleen Wynne’s government agreed to allow physicians access to binding arbitration. Doctors in Ontario had long argued that they were at a disadvantage when talks reached an impasse because there was no mechanism to refer the dispute to a third party for a final say, while the Liberals feared an arbitrator could award generous pay hikes to doctors, undercutting efforts to control health spending.

The arbitration hearings began last spring. After the Progressive Conservatives swept to power in June, they extended an olive branch to the OMA, converting some arbitration dates into negotiation days. The talks stalled and arbitration resumed last month. 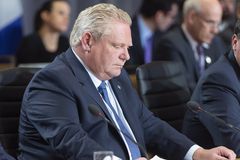