Ontario’s Progressive Conservatives say they will cut hydro rates by 12 per cent if they win the June election by shifting more of the costs of the electrical system to all taxpayers.

Tory Leader Doug Ford promised on Friday that his party would save the average family about $14 a month on their hydro bills if he becomes the province’s next premier by having the government pay for some electrical costs. He said the reduction would come on top of the 25 per cent cut the Liberal government introduced last year.

“We’re going to put more money in your pocket without shady accounting tricks,” Mr. Ford said at a hotel in Kitchener, Ont.

Mr. Ford said his plan, which is nearly identical to the one former leader Patrick Brown unveiled last year, would cost the government about $800-million annually. The Conservatives would direct the province’s share of dividends from Hydro One, the partly privatized utility, to reduce rates. The cost of energy conservation programs would be shifted from hydro bills to the government’s books and the Tories would place a moratorium on new energy contracts.

The dividends currently go into general revenue, and Mr. Ford did not say how the Tories would replace the money.

The announcement comes nearly a year after Premier Kathleen Wynne’s government put forward its plan to cut hydro rates by a quarter. Dubbed the Fair Hydro Plan, the policy was introduced after electricity bills had nearly doubled over the previous decade, causing widespread anger in the province. Ontario’s Financial Accountability Office has said the plan could cost $45-billion over the next three decades.

Mr. Ford said on Thursday that he would call an independent inquiry to probe government spending after a report from Ontario’s Auditor-General highlighted several issues with the way the province has accounted for the Fair Hydro Plan. While Mr. Ford repeatedly called the report’s conclusions on the Liberal government’s hydro plan a “scandal,” on Friday he said his hydro cut would be built on top of the rate deduction from the existing policy.

“We’re going to be reviewing that,” he said of the Liberal policy. “That was, as far as I’m concerned, the wrong thing to do, borrowing down the future and the only people who are going to pay for it is our children, our great-grandchildren.”

Colin Nekolaichuk, a spokesman for the Ministry of Energy, said Mr. Ford’s decision to support the Liberal government’s energy policy was a welcome move. However, he said Mr. Ford’s previous commitment to fire Hydro One’s chief executive and replace the utility’s board was the creating uncertainty in the electricity sector. Mr. Ford said he was reacting to the large salaries paid to executives at the former Crown corporation.

“Doug Ford’s plans don’t add up to anything but empty promises that will eventually dig their way into people’s pockets,” Mr. Nekolaichuk said.

The spokesman said the government has no new energy projects for Mr. Ford to stop. Any move to halt existing contracts, he said, would invite “massive lawsuits.”

Todd Smith, the PC Party’s energy critic, said it could be difficult to cancel the government’s “convoluted” hydro plan.

New Democrat Leader Andrea Horwath said she would scrap the Fair Hydro Plan and bring Hydro One back into public hands. Her party has pledged to reduce bills by 30 per cent overall. 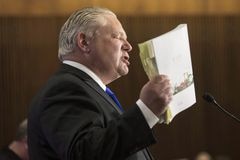 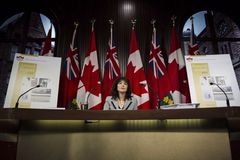 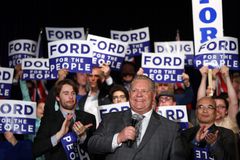 Opinion
Facts versus politics: The truth about Hydro One and executive compensation
April 22, 2018 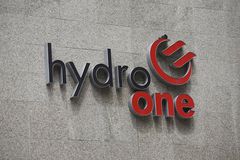