At a news conference on Monday where he announced the details of a cross-ministry task force assembled to look at overhauling the towing industry, Mr. Ford said he has been “deeply concerned” by reports over the past several months of corruption and criminality in the province’s towing business.

“That ends now,” he said. “These turf wars are totally unacceptable. ... To all the bad actors out there, my message is very clear: The party’s over. We’re coming for you, and we’ll catch you and we will lock you up.”

Long-standing calls from stakeholders for province-wide reform have taken on urgency in recent months, as violence among tow-truck drivers across the Greater Toronto Area has escalated.

A Globe and Mail investigation in February reported that the turf war has been playing out across the GTA for two years. More than 50 trucks have been set on fire, at least four men with ties to the industry have been killed and a law firm shut down after two arsons and a daytime shooting as operators compete for bigger slices of a lucrative segment of the industry known as collision towing or accident-chasing.

In the months since, about 30 people have been charged in a joint-forces police operation into corruption and violence in the industry, and at least another 20 arrests are expected. Four police officers have also separately been charged with towing-related corruption, accused of taking kickbacks from drivers in exchange for information about crash scenes.

Some peripheral businesses – such as body shops, car-rental companies and physiotherapy clinics – will pay tow-truck drivers to send clients their way after a crash. As a result, a single car can yield thousands of dollars, and chasers race each other to every scene.

Towing industry stakeholders have pointed to a system in which police require vehicle owners to take the first available tow as a way to clear the roads quickly as a root cause of the turf wars – arguing that this could be resolved with towing contracts, or a vetted rotation list.

On Monday, Transportation Minister Caroline Mulroney confirmed the task force – which includes representatives of the Ontario Provincial Police and the ministries of Transportation, Solicitor-General, Government and Consumer Services, Municipal Affairs and Housing, Finance and Labour, Training and Skills Development – will look at the practice.

“Absolutely, my understanding is this is an element that contributes to the violence and to reducing people’s sense of safety as they’re waiting for a tow,” Ms. Mulroney said. “And so it’s certainly something that we will be looking at as part of the task force’s work.”

For Joey Gagne, president of the Canadian Towing Association, that commitment “is a big win.”

Mr. Gagne, who is also president of Abrams Towing, a 200-truck operation in Southern Ontario, has been advocating for reform of the “first-available” system for many years. “That’s the only way you’re going to fix the problem,” he said. “It’s an opportunistic system that exploits consumers and the insurance industry.”

Another possibility the task force is exploring is provincial licensing. The current municipal licensing model has led to a patchwork system of overlapping and contradictory rules, and a dearth of training requirements or safety and equipment standards.

“We are looking at all options ... and that includes provincial licensing,” Ms. Mulroney said. “The task force will provide recommendations and we’ll continue to consult with industry, but we are certainly going to be consulting on the issue of provincial licensing.”

The task force hopes to complete consultations this summer, and introduce legislative or regulatory changes as early as the fall.

Teresa Di Felice, assistant vice-president of government and community relations for CAA South Central Ontario, said she is “really encouraged by the announcement,” and is eager to work with the task force.

“We’ve already developed what we think a framework could be, or what it should entail when it comes to regulating or licensing the towing industry in Ontario,” she said.

Mark Graves, president of the Provincial Towing Association of Ontario – which launched its own task force last fall to probe similar industry issues – said he was pleased to hear the announcement on Monday. “It’s a great start,” he said, “and we want to work with them to ensure it’s developed into a fair and meaningful system.”

The announcement was not welcomed by all industry players.

Aris Marinos, who owns a towing company called EY Towing and represents an informal association of independent tow-truck drivers, said the whole industry is being punished for the sins of a few.

“My position on this whole thing is that it is a criminal matter ... not a towing matter,” he said on Monday.

When a previous provincial government announced reforms to the towing industry, Mr. Marinos organized a protest, with hundreds of tow trucks circling Queen’s Park in December, 2014. Mr. Marinos said his group has no plans to protest this time, but he’ll keep a close eye on the task force’s proposals.

“We’d rather try to work with whoever’s involved,” he said. “We’ll see after that.” 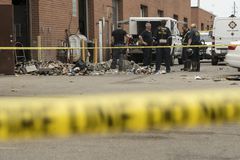 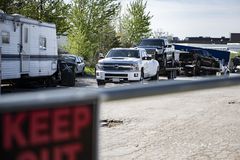