The promises came just a day ahead of Wednesday’s official start to the provincial election campaign.

Mr. Ford said on Tuesday he has heard concerns from many families, and if he becomes premier after the June 7 election, he would consult parents about a more age-appropriate sex-ed curriculum, scrap the “discovery” math system and cut funding to postsecondary institutions that don’t allow controversial speakers. He said he would also reform the tests conducted by the Education Quality and Accountability Office (EQAO) and introduce improved standardized testing.

“I want an education system that respects parents. I want schools that are focused on teaching kids the skills that matter. That’s reading, writing and math,” Mr. Ford said. “We’re going to fix the education [system] in Ontario by getting back to the basics, by respecting parents and by respecting free speech at universities.”

Packaging a reform of sex-education with campus free speech will play well with Conservative supporters, but could also appeal to other voters who have seen both issues hit the headlines, said Karen Bird, a professor of political science at McMaster University.

“Talking about EQAO testing and university free speech are really very distinctive kind of issues and policy domains. Wrapping it all up as somehow Ontario’s education system has gone off the rails is interesting,” said Dr. Bird, who served on a committee on free expression at the university.

Mr. Ford said on Tuesday that many parents felt “ignored” when the sex-ed curriculum was rolled out in 2015. Educators hailed it as necessary to address the realities children face today. But opponents, mainly faith groups, labelled it age-inappropriate and argued that parents should provide such information.

The sex-ed component makes up about 10 per cent of the larger health and physical-education curriculum and handles such topics as acceptance of same-sex couples and online safety.

Tanya Granic Allen, who Mr. Ford recently removed as a candidate over homophobic statements the Liberals brought to light, has been a strong opponent of the sex-ed curriculum and tweeted on Tuesday that she is pleased the leader plans to repeal it.

Education Minister Indira Naidoo-Harris said in an e-mail statement on Tuesday that extensive consultation was done on the sex-ed curriculum. She said students are learning about safety and healthy relationships in an age-appropriate way.

“At a time where more and more students are active online, we cannot afford to turn back the clock when it comes to student safety and well-being,” she said.

NDP Leader Andrea Horwath said the health and physical-education curriculum had needed to be upgraded, and her party supported the Liberals’ changes. She said Mr. Ford would be “dragging our province backwards” by repealing it.

George Kourtis, program co-ordinator for health and physical education at the Toronto District School Board, said staff held community events in 2015 to explain the updates.

“I would just encourage the community to read what’s actually in the [curriculum] expectations, because it teaches students about respect and safety,” Mr. Kourtis said.

Similar political flare-ups have occurred on university campuses over appearances by controversial speakers.

It is not clear if the Ford campaign consulted with universities or the Higher Education Quality Council of Ontario (HEQCO), the government agency that it would task with investigating free-speech violations.

HEQCO is mandated to measure students’ educational outcomes and institutions’ ability to deliver high-quality programs efficiently. A spokesperson for the Ford campaign suggested it could expand to look at freedom of expression.

“We continue to do the work that’s part of our legislated mandate,” said Harvey Weingarten, the CEO of HEQCO, who referred questions about how the agency became involved to the Ford campaign.

Last year, federal Conservative Leader Andrew Scheer said his party would withhold federal research funds from universities that do not protect free speech. But Mr. Scheer later added that schools should be allowed to ban extreme groups, such as white nationalists.

As well as intervening on sex-ed and campus speech, Mr. Ford also said he would change the math curriculum so that students would focus on basic arithmetic rather than discovery, or creative, strategies.

Proponents say students maintain their interest in math by investigating ideas through problem-solving, pattern discovery and open-ended exploration. But opponents point to test scores, including in Ontario, where results have fallen or stagnated. Half of Grade 6 students failed to meet provincial standards in math in the 2016-17 school year.

Ms. Naidoo-Harris said Mr. Ford “needs to do his homework” when it comes to math, and that students are learning problem-solving and operational skills.

The Liberal government injected $60-million into the education system to add math-specialist teachers to every school and provide additional training for staff. It has also made 60 minutes of math instruction each day mandatory in elementary school.

But some worry it is not nearly enough and some parents want a back-to-basics approach to teaching that emphasizes repetition and drills. 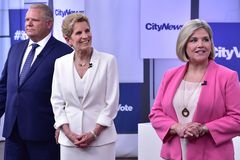 Actors hired to pose as Doug Ford supporters outside Ontario leaders’ debate
May 8, 2018 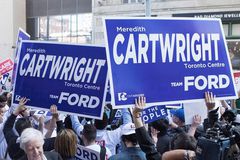 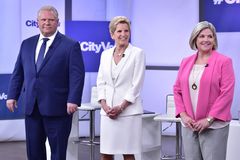 Ford stands by Ontario PC candidate Andrew Lawton under fire for past comments
May 8, 2018
Follow Caroline Alphonso and Simona Chiose on Twitter @calphonso @srchiose
Report an error Editorial code of conduct
Due to technical reasons, we have temporarily removed commenting from our articles. We hope to have this fixed soon. Thank you for your patience. If you are looking to give feedback on our new site, please send it along to feedback@globeandmail.com. If you want to write a letter to the editor, please forward to letters@globeandmail.com.
Comments