There may be days, during Doug Ford’s reign, when it feels as though the gates of Ontario’s legislature have been stormed by outsiders.

Friday was not one of them.

The swearing-in of the province’s new government had a few populist flourishes. An outdoor ceremony broadened the audience beyond VIPs to a few hundred fans of the new Premier who braved the heat. A news release proclaimed “Ontario’s first ever Government for the People” and Mr. Ford’s speech hit similar, if slightly more subtle, notes.

But in the biggest news of the day – the unveiling of Mr. Ford’s pared-down, 21-member cabinet (including the Premier) – it was most striking how much value was given to experience.

Mr. Ford could have given promotions to a few top performers from the Progressive Conservatives’ time in opposition (the likes of Vic Fedeli, Lisa MacLeod and Todd Smith), and otherwise prioritized new blood, and some Tories would have applauded. Among those who worked for previous leaders Tim Hudak and Patrick Brown, there was a common perception that many veteran MPPs representing very safe ridings had long mailed it in.

Instead, about half the PCs’ 27-member pre-election caucus is now in cabinet. Only six rookies are alongside them, mostly stars Mr. Ford could not leave out: Caroline Mulroney, former federal cabinet minister Greg Rickford, executives Rod Phillips and Peter Bethlenfalvy. They are joined by leadership runner-up Christine Elliott, back as an MPP after a hiatus, as Health Minister and Deputy Premier. Almost no chances were taken on the nearly 50 rookies elected on June 7.

It’s not quite what one would expect from an anti-establishment Premier. But it stands to serve him well on a bunch of fronts that likely entered his calculations – and open him up to one major criticism.

The most obvious reason not to appoint many novices is that it sets them up to fail, particularly when the Premier has little patience for learning on the job. On Friday, Mr. Ford said he intends to recall the legislature for a rare July sitting. It will be a challenge for even the sturdiest veterans to get ready on time, let alone anyone trying to figure out where the bathrooms are.

A second consideration, of which many incoming premiers are mindful, is ego management. Veteran MPPs not appointed to cabinet at the outset know they are probably never getting in and are liable to grow bitter. Rookies cannot really take it personally when almost none makes the grade and still has an incentive to impress.

Then there is a factor more specific to this government: The cloud hanging over MPPs who won competitive party nominations while Mr. Brown was leader; that is, most new ones. Alleged fraud in those contests caused a bunch of nominations to be overturned before the election and nobody will be surprised if further fallout is to come. And that would be a lot worse if it takes down a minister rather than a backbencher. Even if they don’t have cause to suspect major ethical breaches, many of Mr. Ford’s people simply don’t trust new MPPs seen as close to Mr. Brown.

The catch, evident from a quick glance at a photo of the new cabinet, is one of demographics. Many of the new MPPs come from immigrant communities in suburban ridings. By contrast, almost everyone in the PC caucus while the Liberals were in power is from a rural, small-town or exurban riding with a predominantly white (and often older) population.

As a result, Mr. Ford’s cabinet has one visible minority: 81-year-old Raymond Cho, also the only visible minority in the pre-election caucus, now in the junior posting of Seniors and Accessibility.

One need not be an advocate of quotas to recognize a cabinet that is 95 per cent white is out of sync with 2018 Ontario, nor interpret any ill intent on Mr. Ford’s part in order to to see that makeup as a potential problem.

As the Tories correctly point out, when confronted with comparisons to certain other right-wing populists, Mr. Ford’s “For the people” pitch played well during the campaign with members of minority communities – from blue-collar workers to small-business owners – who felt disconnected from a Liberal government perceived to be preoccupied with downtown elites.

Mr. Ford’s personal brand is strong enough that ministerial appointments won’t instantly change that and he may have a strong sense of what his suburban supporters expect. But at minimum, he will lack certain perspectives – including from the entire Peel Region, home to massive South Asian communities in Brampton and Mississauga – at his cabinet table.

The ministers sitting there may see themselves as outsiders, coming from ridings that felt at least as neglected by the Liberals. They may not be wrong. But they could suffer a perceived disconnect of their own, from voters who helped bring them to power, if they’re not careful.

New Premier Doug Ford paints troubled picture of Ontario, pledges to lead it back to prosperity as he is sworn in
June 29, 2018 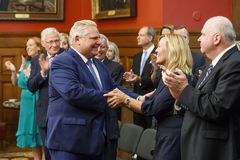 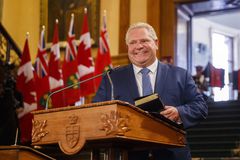